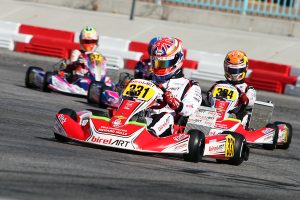 It seems the level of competition continues to increase year after year in TaG competition at the SKUSA SuperNationals. Beginning in 2003, the Senior category was quick to grab the attention of top drivers from around the country and eventually from around the world. The main event at last year’s SuperNationals in X30 Senior went down in the history books as one of the wildest finishes to date.

Ben Cooper, a three-time RMCGF champ, gave Canada its third different winner as he claimed the victory on SuperSunday in the X30 Senior category. Cooper took advantage of a fierce battle between FIA World Karting Champion Lorenzo Travisanutto and USA driver Christian Brooks, who made contact when Brooks attempted to lunge for the lead. The British-born Canadian earned his second SuperNationals triumph after winning DD2 in 2013. Cooper, who came in to race with Rolison Performance Group / Kosmic last year, has been out of the seat until recently, and has signed with PSL Karting / Birel ART for the SuperNationals. He competed at ROK the RIO at the beginning of November, placing second, most definitely showing that he still has the world championship drive to compete at the front.

You cannot deny the effort that Brooks (Nash / FA Kart) put in on the final lap, battling with the world champ. The door was open in turn four and Brooks took the opportunity. The ‘California Kid’ eventually finished 14th and is set to make his 10th straight start at the SuperNationals, dating back to a P5 result in TaG Cadet in 2010. This is his fifth year in X30 Senior, with a best finish of fifth in 2015. Brooks is fresh off victory at Circuit of the Americas during his F4 US Championship performance during the same weekend as the Formula One US Grand Prix, catching the eyes of many from around the world. 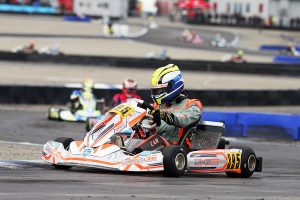 2017 SuperNationals winner Joshua Car won at the WinterNationals this past March (Photo: EKN)

To make things very interesting, the last three winners of the X30 Senior category are in the field. 2016 winner Jake Craig (RPM / Tony Kart) is back behind the wheel after stepping away from the sport for most of the 2019 season. Craig was a top-five finisher at ROK the RIO earlier this month, and placed seventh in last year’s main event on SuperSunday. 2017 victor Joshua Car has been busy here in the United States over the last two years. Following a win at the SuperNats, Car (Crosslink / Exprit) committed full-time to the F4 US program, securing the series championship in 2019. The Aussie was a winner at the SKUSA WinterNationals in March before his car season began, and looks to rebound from a DNF in Vegas last year.

There are a number of international drivers to watch throughout the week who could be in contention come SuperSunday. British driver Taylor Barnard comes in with a big spotlight, having been one of the top drivers in Europe over the past two seasons – driving for Rosberg Racing Academy. The 2019 FIA Karting Vice World Champion will take over Travisanutto’s spot under the KartSport North America / Kart Republic spot. A driver who is a former world karting champion will be in the field once again, as well. 2017 champion Danny Keirle is set to make his return to the SuperNationals for the first time in two years. The Brit will drive for fellow countryman and world champion Terry Fullerton aboard the chassis bearing his name. 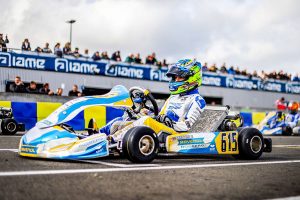 Brazilian Olin Galli (CRG Nordam) has been among the best overall from the past two years, placing eighth and ninth at the SuperNationals. Fellow countryman Arthur Leist (PSL / Birel ART) won the 2015 Junior division in Vegas, and will be making his first start in the Senior class. Enrico de Lucca (NF / Kosmic) is set for his Senior debut at the SuperNationals, having won ROK the RIO in the Junior division to round out the Brazil spotlight.

The international driver with the most experience in the category at the SuperNationals is multi-time Australian champion David Sera (KSNA / Sera Kart). His first start came in 2009, with runner-up results coming in 2010 and 2013. This makes 2019 his 10th start in Vegas, attempting to rebound from two DNFs over the last two years. Making his first SuperNats start ever is Brit Oliver Hodgson (J3 / CompKart), a former RMCGF and IAME International Final winner, who finished fourth in the SKUSA Pro Tour championship chase this season.

There is a good handful of Senior rookies in the field at the SuperNationals. 2017 Junior winner Jak Crawford (Nash / FA Kart) leads the squad that comes in looking to make a stand against the big names. Jace Denmark-Gessel (RPM / Tony Kart) has performed well in 2019, including a top-10 at the RMCGF in Italy. Santiago Trisini (KSNA / Kart Republic) is a 2017 podium finisher in Mini Swift, and has spent the majority of his season racing in Europe. Ethan Ho (APM / Tony Kart) was among the top Junior in 2019, making his Senior debut. Also making a Senior debut is Canadian Mackenzie Clark (Prime / Birel ART), who is coming back for a Senior debut after focusing on open wheel car racing this season on Canada. 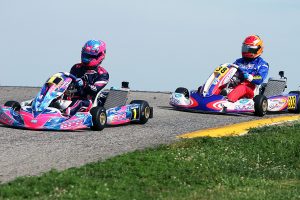 Only 10 drivers are performing double duty from X30 Senior. Austin Garrison (CRG Nordam) and Billy Musgrave (Croc Promotion USA) are the only drivers to run Pro Shifter as well. Garrison, the 2014 SKUSA Pro Tour S2 champion is making his fourth straight start in the X30 class, with a best finish of 16th. Musgrave is seeking a third straight victory in Pro Shifter at the SuperNationals, set to make his third start at in the X30 Senior class with a best finish of 10th in 2017. The three-time SuperNats winner is the only driver to stand on the podium in two categories on the SKUSA Pro Tour. 2015 SKUSA Pro Tour Junior champion Brandon Lemke (Franklin / Merlin) is running both X30 and KA100 in his return to the SuperNationals. The Wisconsin driver sat out last year after six starts, including a P3 in TaG Cadet in 2012. His lone two starts in the Senior class have been a DNQ and a DNF. Jake Drew (FW / CompKart) is another double duty driver in X30 and KA100 to watch in both.

Last, but certainly not least, are the top two drivers from the four years of North American karting. Ryan Norberg secured his fourth straight SKUSA Pro Tour X30 Senior championship this summer, a record not matched by any in the current era. Norberg’s move to the Rolison Performance Group tent aboard the Kosmic went with very little hiccups, and he remains the EKN Driver Rankings #1 driver. In his three starts at the SuperNats, P5 was his best finish in 2017 and he carded a 25th result last year. Next to Norberg, Brandon Jarsocrak has been among the top in the USA for the past five years, earning his third straight United States Pro Kart Series championship this summer. The 2016 SuperSunday polesitter recorded his best SuperNats finish that year, dropping to ninth in a wild main event. Jarsocrak was among the lead group on the final lap last year until contact put him in the wall on the exit of turn six. After going winless for much of the first half of 2019, his season rebounded after a reuniting with Mike Doty Racing, putting him back aboard a OTK chassis. That led to a runner-up finish at SpringNationals and a third victory in three years at the SummerNationals.

6 – Drivers who have competed in F4 US Championship

33 – Drivers from last year in the field