New era for headline SKUSA shifterkart categories in Vegas with $10,000 on the line 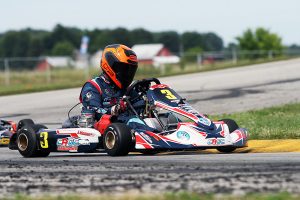 The renamed ‘Pro Shifter’ category made its debut at the 2018 SuperNationals as the final outing for the Honda powerplant in the headline shifterkart position under the Superkarts! USA banner. The new name marked the end of the long-running CR125, and the beginning for the IAME SSE 175cc engine for the 2019 season and beyond. SKUSA ushered in the new engine package at the SKUSA Winter Series last January with 13 drivers in the new Pro Shifter division, and that grid grew to a total number of 32 at the SKUSA SummerNationals, with a split between the Pro and Pro2 categories. While the final Stock Honda race entry mark was 50 last year, a combined 37 entries will fight in the Pro / Pro2 combined race group this time around, showing the continuing growth of the platform.

In the history books, the final Stock Honda race at the SuperNationals was won by Billy Musgrave. In fairness, the last two in the S1 division were won by the now three-time SuperNationals victor. Musgrave’s opening act at the SuperNationals ended with a victory in the S2 class back in 2012. Since then, he’s become a six-time California ProKart Challenge champion and has won multiple times on the SKUSA Pro Tour. In his six SuperNats starts in the S1 class, Musgrave finished in the top-seven in five of the events. His last two victories were aboard the Aluminos brand, however, Musgrave has been running the Croc Promotion USA brand since June and will attempt to give them their first SuperNats victory next weekend. 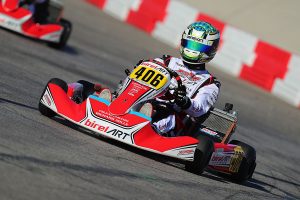 Jake French will carry the Birel ART colors at the SuperNationals and 2020 (Photo: Cody Schindel – CKN)

The hottest driver in IAME SSE competition as of late is 2017 SKUSA Pro Tour champion Jake French. In May, French made a return to the driver’s seat with Croc Promotion USA, and put in hours of work from his debut through to the SummerNationals in August, where he swept both main events. French then won at the Streets of Lancaster Grand Prix, finishing all three races ahead of Musgrave. That event would be his final on the brand, as the Texan then moved over to PSL Karting / Birel ART the following week. French’s debut with the team had him running in the top-three at the ROK the RIO until contact on the opening lap of the main event sent him into the barriers. French hopes to bounce back in Vegas, coming off a P6 in KZ during last year’s SuperNationals.

While Musgrave and French may have the momentum, they do not carry the SKUSA #1 plate. That honor belongs to Washington’s Kyle Wick for the SuperNationals and throughout 2020. Despite going winless on the year on the SKUSA Pro Tour, he garnered four third-place results to capture the championship running with the CRG Nordam squad. Just weeks after claiming the title, Wick announced his return to the Rolison Performance Group, and is set to compete aboard a Tony Kart. Wick was at the ROK the RIO for his debut, and ran in the top-five all week before a penalty dropped him in to ninth the final results. 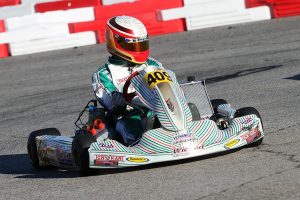 2019 SKUSA Pro Tour champion Kyle Wick is set to put the no. 1 plate on his new ride at the SuperNationals (Photo: EKN)

Wick’s top challenger for the championship was his CRG Nordam teammate AJ Myers. The 2018 SKUSA Pro Tour champion ended last year by moving over to the Croc Promotion USA squad after earning the title with TB Kart USA. Myers drove to a runner-up finish at the SuperNationals and then opened the 2019 SKUSA Pro Tour with a victory at the WinterNationals. The two groups parted ways in April, and CRG Nordam was quick to pick up Myers. The Florida veteran recorded a runner-up in his debut and finished out the year second in the standings to Wick for a CRG 1-2. Myers has a decorated resume at the SuperNationals, including two runner-up results in S1 and the memorable P5 in KZ at the 2014 edition.

Musgrave is not the only former winner in the Pro Shifter field. 2013 S1 victor Joey Wimsett (DRT / DR Kart) is set to make his 14th straight SuperNationals start, dating back to 2006 in the TaG Senior category. 2011 was his first in the S1 division, ripping off three straight podium finishes that included a dramatic victory in 2013 to lock up the SKUSA Pro Tour championship and a major payday. His best finish since that run was last year with a P7 in the main event. Wimsett’s lone race this season came at the SummerNationals, where he placed third in the Sunday Final after nursing injured ribs. Mathias Ramirez (GFC) is the other SuperNationals winner in the field, and the Florida driver is set to pull off the double duty with KZ as he did in 2018. The 2016 S2 winner finished eighth on SuperSunday a year ago. A fourth different SuperNationals winner is slated to join the fun in Vegas, his hometown. Veteran Matt Jaskol, not listed on the entry list, confirmed on Instagram this week that he will be racing once again at his home event, where he finished eighth in KZ. Jaskol is set to be running with CRG Nordam in his IAME SSE debut. 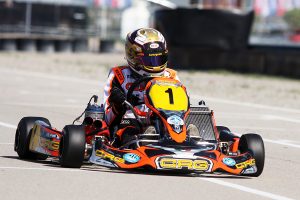 AJ Myers has been among the best at the SuperNationals in the last five years minus a victory (Photo: EKN)

Rounding out the list of former SKUSA Pro Tour champions in the field are two S2 title winners. Austin Garrison (CRG Nordam) is set to run double duty on the week, running both Pro Shifter and X30 Senior. Garrison, the 2014 S2 champion, is coming off a 23rd place finish at the FIA Karting KZ World Championships in Italy. Austin Wilkins won the 2016 S2 title and has two runner-up results in the category at the SuperNats. Racing has taken a back seat as Wilkins puts his efforts toward a degree from Oklahoma State University, but he is excited to get back on-track and working with former teammate French under the PSL / Birel ART tent.

Only two drivers will be making their SuperNationals debut in the Pro Shifter category – Swiss driver Philipp Seewer (RPG / Kosmic) and American Kyle Kennedy (HMG / CompKart). Seewer is the 2019 IAME Euro Series X30 Shifter champion and finished ninth at the IAME International Final. Kennedy is part of the Harden Motorsports Group, and will be joined by Devon Smith-Harden as they make their debuts on the CompKart. Cody Hodgson (Aluminos) is making his first start at the SuperNationals since 2015. SKUSA Pro Tour race winner Hunter Pickett (GFC) is set for his second run in the Pro Shifter class, coming off two podiums in S2. Rory van der Steur (CM / Magik) completes those doing double duty in Pro / KZ.

Pro Shifter 2 replaces the S2 division with the new IAME SSE 175cc powerplant, making its debut at the SuperNationals this year. A total of 23 drivers will do battle in the same race group as Pro Shifter for their class win. 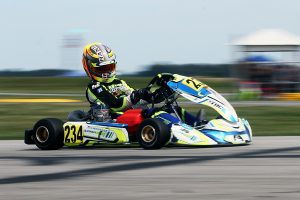 Race Liberante (J3 / CompKart) comes in as the driver to beat, having earned four victories at the SKUSA Pro Tour to claim the series championship. Liberante also has USAC Battle at the Brickyard and Rock Island Grand Prix King of the Streets triumphs to his credit. A SuperNats victory would provide a stellar trio of wins for 2019. National #2 in the SKUSA Pro Tour standings – Max Hewitt (CRG Nordam) – is unable to make the trek to Vegas as he concentrates on his studies at Baylor University. Calvin Ming (MRC / Croc Promotion), a former Cooper Tires USF200 Championship driver, returned to his roots of karting for the 2019 season, placing third in the SKUSA Pro Tour standings. This will be his first shifterkart start at the SuperNationals after previous performances in X30. Aside from Liberante and Hewitt, Mark Snyder (SBR / Formula K) was the only other winner on the SKUSA Pro Tour. The Texan won at the SummerNationals and finished fifth in the championship standings. Snyder recorded a DNF in last year’s SuperNationals.

A total of 10 drivers stood on the podium throughout the season on the SKUSA Pro Tour. Among them are Blair Hosie (MRC / Aluminos), Streets of Lancaster Grand Prix winner Connor Robles (MRC / Croc Promotion), Anthony Freese (Cambrian / Birel ART) and Baylor Griffin (Orsolon / Tony Kart). All are set to race in Las Vegas. Dalton Egger (Rolison / Tony Kart) also finished on the podium at the SummerNationals, and he is set to make his first start at the SuperNationals since 2012.

15 – Pro Shifter 2 rookies at the SuperNationals