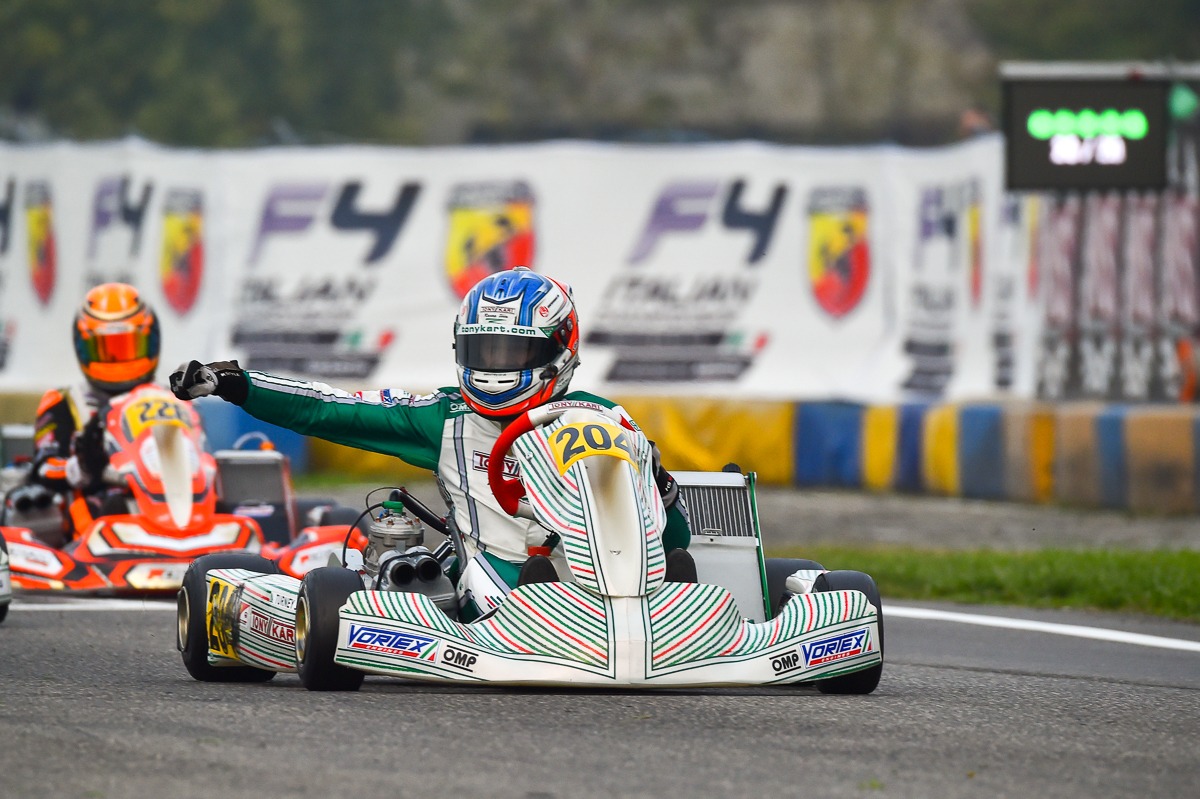 On the last round of the WSK Open Cup, the Tony Kart Racing Team is once again at the top thanks to the victory of his English driver on the 7 Laghi Circuit.

With the victory in the OK Final signed by Joseph Turney, the Tony Kart Racing Team gains a WSK Open Cup rich in satisfactions. Also in the last round just ended on the 7 Laghi Circuit in Castelletto di Branduzzo (Italy) we proved to be very competitive, despite an inclement weather.

The success of Joseph Turney in OK is the result of a final intense fight. After two victories in the heats, a best lap and a third place in prefinal obtained throughout the weekend, the Englishman proves to be very determined in the decisive race. Moreover, with the points scored in the victory, Joseph Turney manages to climb up the ranking and ends the championship second.

Among the fastest of the line-up, also our Pedro Hiltbrand, always firmly in topten, but betrayed by the track conditions, as well as Lorenzo Travisanutto. The world champion, however, manages to recover the unlucky first round by gaining also a second place in the heats and finishing fifth in final and prefinal. Pedro Hiltbrand, instead, cannot reach the eight place in the final due to a penalty.

The newcomer in OK, Josep Maria Martì, makes a great deal of progress brilliantly stands out in the heats, all ended at the eight place. After a daring prefinal, where Martì loses and recovers few positions, the decisive race is amazing: he brilliantly recovers seven positions and end tenth.

In OKJ, Aiden Neate and Harley Keeble prove to become familiar both with the Tony Kart Racer 401 R powered by Vortexand with the opponents’ level: both our new standard-bearers brilliantly recover positions in the Qualifying Heats, always getting close to the top ten. Neate does very well in prefinal finishing eight, while Keeble ends the weekend with a 10 positions comeback in the final.

For Nikita Bedrin, instead, the weekend is a little bit more complicated than expected. The results however are great, with a second and a third place in the heats and a seventh place in finale, obtained after having started from the tenth position.

Excellent performances for the youngest drivers engaged in the 60 Mini at the wheel of the Tony Kart Mini Rookie EV. Starting from Kean Nakamura Berta, who at his debut with our colours proves to come up to the expectations, immediately managing to win a heat. Unfortunately a penalty in prefinal deprives him of the opportunity to enter the decisive race.

Authors of a great weekend are also Jimmy Helias, just out of the top ten in the final but sixth in qualifying, third in pre-final and third and fourth in the heats, and Jules Caranta, unlucky in being involved in an accident in the early stages of the final after having proof of great continuity in the heats, always ended in top ten.

James Egozi, finally, is among the fastest drivers in the qualifying heats with the ninth position, while Filippo Parmeggiani, continues his apprenticeship making his way in the middle of the line-up.

The Tony Kart Racing Team is now getting ready for the last appointment of the International calendar: the WSK Final Cup, scheduled for the next weekend at the Adria Karting Raceway, where the 60 Mini, OKJ, OK and KZ2 categories will be racing.