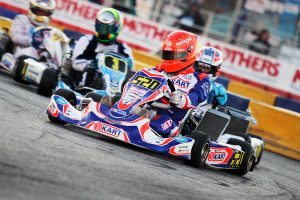 The TaG concept (Touch and Go) made waves in the early 2000s, beginning at the SuperNationals in 2003. A Senior and Master class was each offered and Michael Brookes was the inaugural winner in TaG Master. Only 10 different drivers has won the category at the SuperNationals over the next 15 years, with four drivers have earned multiple victories. Three of them, including the defending race winner, are among the 61 drivers who will be vying got 2019 SKUSA SuperNationals victory.

Everything begins with the defending winner – Kip Foster. The 2018 victory for the Aussie, aboard a kart carrying his name, was his third SuperNationals triumph, giving him a 33% win percentage having competed nine times in the category. In addition, Foster had the provisional victory on two occasions – in 2010 and 2011- until tech took them away. His overall score at the SuperNationals is six podiums in nine races.

That number would seem tough to beat, though Brazilian Leonardo Nienkotter has matched Foster toe-to-toe. Nienkotter has a total of six podium finishes in his previous nine SuperNats in the category, along with three straight wins that put the duo in a dead heat in terms of their Las Vegas performances. Nienkotter won in the two years that Foster was removed from the results, and then stood on top of the podium in 2012 for a third straight victory. Leonardo has three podium finishes in his last five SuperNationals, and last year drove up to 12th after a long week that began with a DNS in qualifying that put him 75th on the results sheet. 2018 was still a great season, with Nienkotter earning a SKUSA Pro Tour championship. He has been absent from competing in the USA, and joins CRG Nordam for his first start at the SuperNationals aboard a CRG after running the brand all season in Brazil. 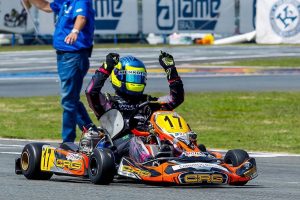 This will be Leonardo Nienkotter’s seventh year attempting to win his fourth SuperNationals (Photo: Nienkotter Racing)

A total of 12 drivers have won three times at the SuperNationals. Foster and Nienkotter each have three and they are vying to tie the total of four wins set by Connor De Phillippi – a current BMW Motorsport driver. De Phillippi won twice in 2005 (K2 / JICA) and added a win each in 2006 (S3) and 2007 (S1).

Drivers who combine to win the last nine of 11 SuperNationals are all in the field, led by Foster and Nienkotter. Closing out that calculation are two-time victor Billy Cleavelin and 2016 victor Renato Jader David. Cleavelin (RPG / Kosmic) won in his SuperNats debut in 2008 and then defended that victory the following year. The America went winless over the next five seasons before returning last year as a late entry. Cleavelin was among the top-five all week but a pushback bumper penalty dropped him to 13th in the final results. Cleavelin, at the age of 62, is still a contender going into the week.

Brazilian Jader David (Orsolon / Tony Kart) has started at the SuperNationals four times, placing inside the top-10 in all with two podium finishes and two ninth-place results. The 2016 victor is coming off a Florida Winter Tour title and he also placing second at the Rok Cup Superfinal in Italy this season. In his only SKUSA Pro Tour start this season, he was runner-up to eventual title winner Matt Johnson. 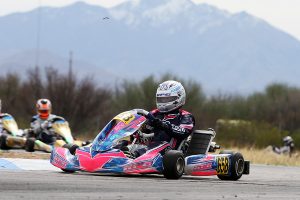 After a rough start to 2019, veteran Matt Johnson (Nash / FA Kart) rolled out four straight victories to earn the SKUSA Pro Tour championship. Last year was the debut of Johnson moving to the Master category, winning at the SpringNationals in Phoenix and placed fourth at the SuperNationals. WinterNationals winners Vatche Tatikian (PGR / Ricciardo) and Derek Wang (BBR / FA Kart) finished the season second and third in the SKUSA Pro Tour standings. Tatikian has two big wins on his resume for 2019, the Canadian Karting Championships and ROK the RIO. His best finish at the SuperNationals is a sixth from 2015, and he placed 22nd a year ago. Two-time SKUSA Pro Tour champ Wang has a Challenge of the Americas championship to his credit for 2019, and a best finish at the SuperNationals coming in 2016 with his lone podium result of third.

The United States Pro Kart Series brought back the Master class last year, and the category has grown to be among the most competitive. 2019 championship runner-up Scott Roberts (SCR / Tony Kart) leads a trio of drivers to watch in Vegas. Roberts was among the top-10 quickest last year at the SuperNationals, but ultimately recorded a DNF. Scott Kopp (Innovative / Exprit) is coming off a third-place finish in the USPKS standings with one win on the year. This will be his first SuperNats start in the Master class, last racing in X30 Senior back in 2015. Last year was the debut for Darin Marcus into the Master category. Marcus (Fullerton USA) placed 11th in his first run at the SuperNationals. The Illinois driver scored a win in his 2018 USPKS debut, but he went winless in 2019 despite posting four runner-up results. 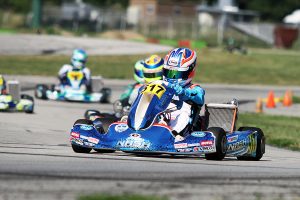 A number of other drivers may stand out during the SuperNationals week. 2013 SKUSA Pro Tour champion Scott Falcone (RPG / Kosmic) is back behind the wheel after a two-year break, coming in with a best SuperNats result of 10th in 2012. Fellow RPG teammate Tim Meyer is coming off a win at ROK the RIO in 100cc Masters. Jess Peterson (PGR / Ricciardo) has two top-10 finishes at the SuperNationals during the last two years. Indiana’s Billy Lewis (MDR / Kosmic) was P14 in his debut at the SuperNationals in X30 Master. Former COTA winner Adam Kasick (FDM / CompKart) stood on the podium in his only start back in 2016, placing fifth.

Only two American drivers have won in the last 11 years in the category, and thus, focus needs to be among the international drivers. Those not mentioned already include Brazilian Eduardo Dieter (CRG Nordam) with three top-10 finishes in three starts. Bruno Martins (NF / CRG) has two top-15 results in the last two years. Danillo Ramalho (NF / Kosmic) finished sixth in 2017, and was among the quick drivers at ROK the RIO. Martin Pierce (KSUSA / CompKart) is a 2008 Rotax Grand Finals winner and while the Irishman calls the USA home, he is making his SuperNats debut in the category.

2 – Number of three-time SuperNationals winners in the field

4 – Previous SuperNationals winners in the field

10 – Number of drivers to win category at SuperNationals since 2003

31 – Drivers from last year in the field