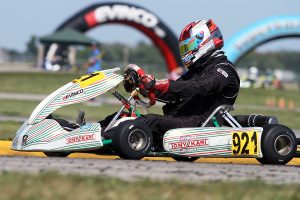 The 2018 edition of the SKUSA SuperNationals welcomed the inaugural 100cc category for Senior drivers. A number of the sport’s top drivers from the 1990s and 2000s developed their skills using the 100cc engine platform, running from Cadet through Junior and into their Senior careers. The IAME KA100 engine has brought back the basics, and the scenario of drivers and their chassis trying to out perform the others. We saw that last year at the KA100 Senior debut at the SuperNationals and throughout the 2019 season as the SKUSA Pro Tour welcomed the category to the national program.

Inaugural SuperNationals winner Steven Barros is ‘one and done’, having sold his winning package from last year and will not be returning for 2019. While the ‘dark horse’ selection from a year ago will be absent, this opens the door for another driver to claim the second ever KA100 Senior victory at the SuperNationals. A quartet of drivers led the way all season at the SKUSA Pro Tour. The title chase went down to the wire between these four, and it would not decided until after the final checkered flag. Texan Austin Osborne, despite having two main event DNFs for a flat tire over the six Finals, edged out the competition to become the inaugural series champion. Osborne (IRM / Tony Kart) won twice – one each at the WinterNats and SummerNats – and finished third in his two other finishes. Austin finished the 2018 SuperNats in eighth. 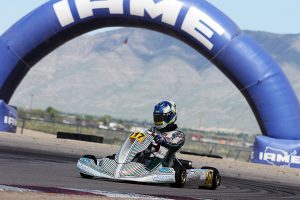 Losing the title by 13 points was Nick Ramirez (PGR / Ricciardo). A string of six top-five finishes, including two podiums to close the season, landed him the SKUSA #2 plate for the SuperNationals and 2020 season. The Californian is among the four 2018 podium finishers returning, has he placed fifth a year ago. Nick Persing (Nash / FA Kart) came off the track at New Castle during the SummerNationals believing that he had won the SKUSA Pro Tour championship. However, a start infraction cost him five positions in the Round Six main event and he lost those valuable points, which dropped him from the top of the provisional title standings down to third after a dramatic final main event of the season. Persing, who will carry the SKUSA #3 plate, was among the top-10 last year until getting shuffled down the order early in the main event, ending up 27th.

The top-four finished the championship chase separated by just 36 points after six rounds of competition. The fourth driver was 2018 WKA champion Blake Hunt (Tony Kart), who went into the SummerNationals as the point leader. While that finale did not pan out as hoped, two weekends prior did as Hunt locked up the United States Pro Kart Series championship. The program that began KA100 racing in 2017, welcomed record totals in the category for 2019. Josh Hotz (Franklin / Merlin) and Matthew Mockabee (MD6 / Kart Republic) finished second and third to Hunt in the USPKS title chase. Hotz placed third in last year’s SuperNationals after leading at the white flag before getting hit with a five-second penalty for jumping the start to move him off the runner-up step. Mockabee is set for his first SuperNationals in KA100 Senior after racing X30 Senior a year ago. 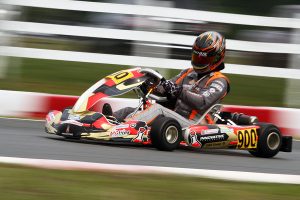 A total of eight drivers from last year’s top-10 are back for more. Runner-up Colton Ramsey (Innovative / Exprit) won during his only USPKS weekend at Ocala, having run a limited schedule due to illness this summer. Fourth-place finisher Scott Foster (KSNA / KF Kart) is one of four drivers from outside the United States competing this year. Foster is the son of now three-time SuperNationals winner Kip Foster, piloting a kart created on his dad’s namesake. Mike Doty Racing has a number of drivers under its tent, including WKA winner Pauly Massimino (Kosmic), who finished sixth last year. Stephen Dial is another driver returning from last year’s top-10. Dial (Milrock / Kosmic) finished ninth a year ago, and has one USPKS victory to his credit this summer.

The SKUSA Pro Tour had five different winners throughout the 2019 season, with all five in attendance at the SuperNationals. Utah drivers Joshua Fine (RFR / Kosmic) and Walker Hess (Tony Kart) defended their home turf during the SpringNationals and each are making their KA100 debuts at the SuperNationals. Garrett Adams also fended off a large turnout of competitors at his home track of New Castle Motorsports Park during the SummerNationals, winning the series finale. Adams (Comet / FA Kart) competed in the Junior division last year, placing 10th. Among the rookies for this year’s KA100 class at the SuperNationals include Challenge of the Americas champion Ethan Ho (APM / Tony Kart) and Dylan Christie (MDR / Kosmic). 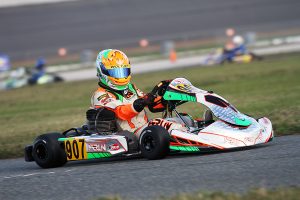 A number of names stand out within the entry list that may be a contender throughout the week. Merlin Nation is coming in strong, vying for its first win at the SuperNationals since 2008 with Tommy ‘Gun’ Andersen in the HPV 2 Junior class. 2015 SKUSA Pro Tour Junior champion Brandon Lemke has been strong all season long, back home with Franklin Motorsports. Lemke won in Daytona during his only KA100 start this season, and was also victorious in WKA and USPKS competition aboard his X30. He will be joined by Michael Geringer, a winner in WKA racing last year. A longtime graduate of Team FMS is TJ Koyen. The Oktane Visual owner was among the favorites going into the event last year, but suffered some hard luck. After racing X30 Senior earlier in the year, the Innovative / Kosmic driver moved back to KA100 to close out the year.

Jenson Altzman (Ruthless / Exprit) is going into the SuperNats as a two-time ROK the RIO winner. Altzman scored victory last week, and is gearing to improve on his 19th place result at last year’s SuperNats. Jake Drew (FW / CompKart) is the KA100 Senior champion at LAKC for 2019, racking up a number of victories on the season. Oliver Calvo (LEM / Praga) has four straight Streets of Lancaster Grand Prix wins. The latest was his debut in the KA100 Senior class, helping to lock up the California ProKart Challenge championship.

4 – Number of drivers from outside the United States in field