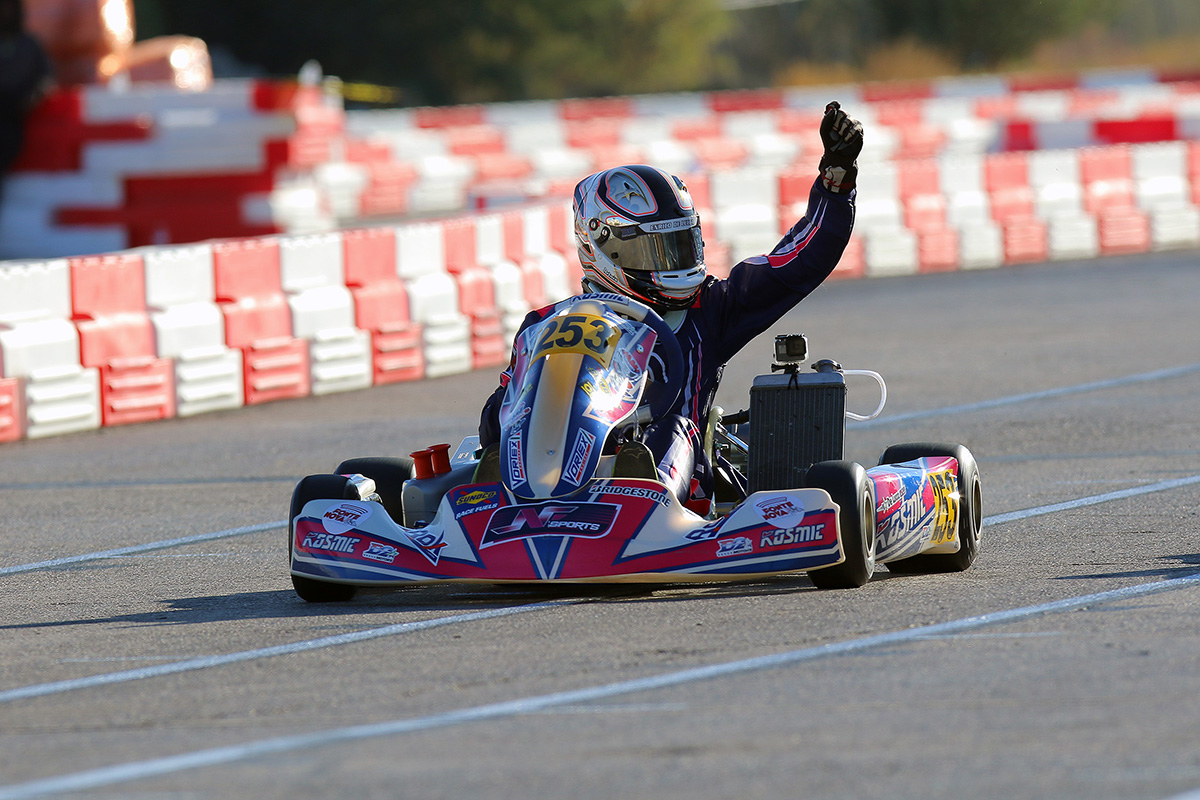 It was a winning weekend for OTK and their dealer network in Las Vegas at the 2019 ROK The RIO
(Photo: CKN)

It was another hugely successful event for the OTK product line at this past weekend’s ROK Cup USA ROK the RIO. Taking place on a temporary circuit adjacent to the RIO All-Suites Hotel & Casino, 165 OTK drivers scored fifteen podiums and six ROK the RIO Championships

“It was a fantastic event put on by Garett Potter and the entire ROK Cup Promotions staff,” explained OTK USA’s Luis Rubial. “There were a lot of smiling faces and happy customers when the final checkered flag flew on Saturday. With drivers on the podium in nearly every class, we at OTK USA were very happy as well. Now, it is on to the Superkarts! USA (SKUSA) SuperNationals.”

Oliver Wheldon had a spirited driver in the Vortex Micro ROK to put his JC Karting prepared Kosmic chassis on the third step of the podium. Taking the Wheldon name to the front of the field, Oliver was one of fifteen OTK karts on the podium this past weekend.

Multi-time ROK Cup race winner and champion Kai Sorensen stole the show in Mini ROK to add another race win to his growing resume. Taking his Supertune prepared Tony Kart to the top step of the podium, Sorensen was one of two OTK branded drivers on the podium. OMP Pole Position winner Ricardo Ianniello crossed the line in P3 to celebrate on the podium. Competing aboard an FA Kart with NF Sports, Ianniello looked to be the driver to beat after Thursday’s qualifying and wheel-to-wheel action.

It was a podium sweep for OTK in ROK Junior. NF Sports and Kosmic driver Enrico De Luca scored the race win as he beat Florida Winter Tour Champion and Speed Concepts Racing driver Luca Mars. Fresh off of his top-five position at the ROK Cup Superfinal in Italy, Late Apex Racing and Tony Kart driver Connor Zilisch found his way to P3 after a qualifying run that saw him down the running order.

It was two additional OTK drivers on the podium in ROK Senior with Diego Ramos putting his Tony Kart on the top step. Racing out of the Racing Edge Motorsports and HR Motorsports camp, Ramos took advantage of a drama filled Senior race to stand on the podium. Rolison Performance Group pilot Jacob Gulick also found his way to the ROK Senior podium with a valiant effort to drive into the third position.

It looked to be another podium sweep for OTK in the Master ROK class as four OTK drivers held the first four positions halfway through the last lap. Entering the final complex of corners, the positions had changed, but still OTK had what looked to be a podium sweep. With some aggressive driving and competitors looking to be named ROK the RIO Champion, Scott Falcone from Rolison Performance Group led the charge in the results order eventually being classified in the fourth position.

Two more podium results came from Shifter Master and Senior 100cc as Msquared / Rolison Performance Group driver Mike Beeny garnered the Vice Championship in the class. Jenson Altzman rose to the occasion in the 100cc class as he took his Ruthless Karting Exprit chassis to the top of the charts in a dramatic last lap pass.

The Junior 100cc podium was another OTK lockout with Tony Kart and Supertune driver Jorge Ortiz capping off a great weekend of competition. Maximilian Opalski was able to put the Ryan Perry Motorsports dealer on the podium with a solid drive aboard an FA Kart while teammate Alex Berg followed closely in P3 for a podium sweep. Leading Edge Motorsports returned to the top step of the podium in the Master 100cc class with Tony Kart driver Tim Meyer. Fast all weekend long and hailing from the Greg Bell program, Meyer led Ruthless Karting’s Colby Wallace in an OTK 1 – 2 finish.

With only one more event on the 2019 calendar, OTK USA and their dealer network will return to Las Vegas for the 23rd annual Superkarts! USA SuperNationals over November 20-24.