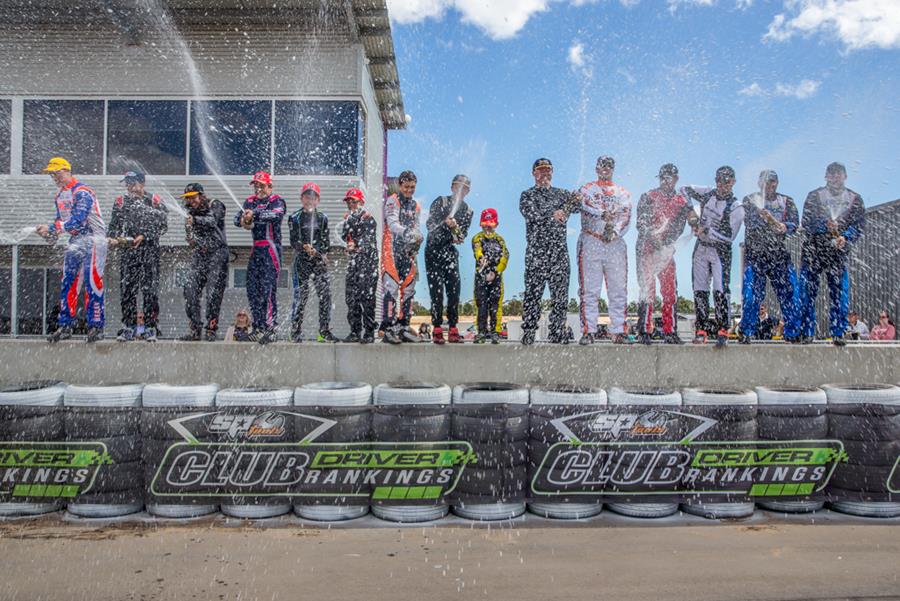 The first ever Ultimate Club Racer event has come to an end at South Australia’s The Bend Motorsport Park with winners coming from no less than five Australian states in a dramatic final day that crowned Australia’s best club karters.

The inaugural event drew together racers from every state in Australia to compete for the ‘silver plate’ that they’ll have the honour of running for the next 12 months in Karting Australia competition.

The big contingent of West Australian competitors ensured there are plenty of victories celebrated with the state equalling Victoria for the most class wins with five apiece.

Each state or territory had a driver on the podium for at least one class, proving the national success of the SP Tools Club Driver Rankings program, while a unique ‘State of Origin’ teams event took place on Saturday with Queensland taking the win.

Two of the most popular wins came for local South Australian drivers that cleaned up big wins in their respective careers.

Jack Szewczuk took out the final race of the day in Cadet 12. He outlasted a race long battle that included Miley Miller and Kamal Mrad – which ended when Mrad turned Miller around on the final lap.

This promoted Xavier Avramides to second position after coming from 11th on the grid to join the front of pack fight, the podium was completed by NSW’s Logan Eveleigh.

The other South Aussie to win was Anthony Capobianco in his first Junior race since stepping up from Cadets. Capobianco took the win in an incredible finish to the KA4 Junior race.

While being in the top five all weekend long, Capobianco was behind a terse battle between Marcus Pisani and Jordan Shalala which boiled over with a quarter of a lap to go.

Shalala and Pisani collided the final complex of turns which brought Capobianco into the fight. Miraculously, Shalala stayed on the track – as did Capobianco – the pair coming to the line with just 14 one-thousandths separating them at the finish. The Northern Territory’s Tyson Mattiazzo then came through for third.

It was better news for Shalala in KA3 Junior. A race long battle with last year’s overall SP Tools Club Driver Rankings winner, Steven Tsemelis was resolved in yet another race that went down to the wire. Shalala got the best of Tsemelis to win, while Hugo Simpson came home third.

SP Tools Junior Sprockets graduate, Corey Carson came through to win Cadet 9 after a last lap collision eliminated WA’s Connor Radford. Dominic Mercuri and Radford had been locked together for much of the race and as Radford went for the move on the last set of corners he misjudged opening the opportunity for Wollongong-based Carson to win. Mercuri salvaged second with Campbell Thompson claiming third.

The Ladies Final produced the tightest race of their division throughout the weekend. Brooke Miller continued her domination but was made to work hard by Caprice Hall. Hall took the lead on several occasions through the final stages, however Hall swept through and led home the WA quinella. The duo were joined for much of the race at the front by Kirsty Mullen, the Victorian ultimately coming home in third position.

It was a similar story for Mullen in 4SS Senior Light where she also ended up on the podium.

It was taken out by Queenslander Scott Pearce who overcame an enthralling race lead battle with Brynn Stewart to get the win by just 0.143 of a second. Mullen completed the podium.

Pearce scored a second podium himself in 4SS Senior Medium where a three kart battle among the big field had the crowds enthralled.

Pearce lost places during the opening corner battles and had to fight his way to the front to join the race that was raging between Lukle Lane and Ian Branson. Once joining the duo, they pulled away from the field.

Branson showed frustration towards Lane and Pearce, however they kept their cool with Queenslander Lane winning by 0.083s from Pearce and Branson just trailing them.

In better news for the Branson family, Mitchell Branson took out the 4SS Senior Heavy category in a dominant victory that had been the order of the day for him getting home in front of Tim Murphy and Peter Rogers.

Cody Leunan joined his sister Brooke Miller in the winner’s circle after overcoming a surprise performance from Paul Trengove in TaG Light. Trengove led all the way until two corners from home when Leunan got through for the win, while Luke Clee came home third. TaG Heavy was taken out by Harley Bishop.