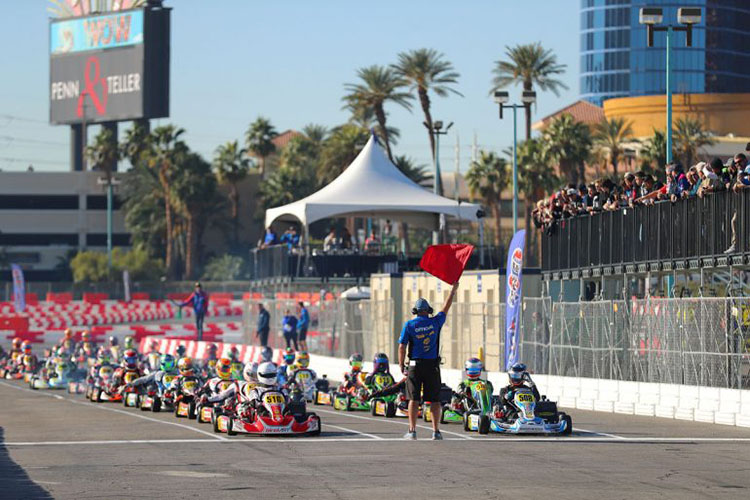 The 2019 ROK Cup Promotions event calendar culminates in Las Vegas with the much anticipated #ROKtheRIO race. Taking place on a temporary circuit on the grounds of the RIO All-Suite Hotel & Casino over the week of Wednesday, October 30 to Saturday, November 2, drivers from around the world have descended on America’s playground for the second annual event. Exceeding last year’s entry total by nearly 100 competitors, a jam packed, yet team and driver friendly schedule greet the stacked fields of talented drivers over the four on track days. With ROK the RIO championship titles on the line, teams and competitors will also be vying for a cash purse in excess of $45,000.

Commencing the on-track activity at 7:30am, each of the ten race divisions progressed through a morning warmup before wheel-to-wheel action would begin at 9:10am. With no issues on Thursday and clean racing, series officials chose to forgo the drivers briefings and head right into the race action. With thirty races set to go green throughout the day, daylight was at a premium as officials worked tirelessly to push through the day on time. Unfortunately, one red flag in the third Shifter ROK heat put a time crunch on the day and the fourth heat for all classes were reduced by two laps.

Senior 100cc – Pentair
Rolling off the grid right on time, Jake Drew (Formula Works) and Billy Musgrave (Croc Promotion) worked together to open a gap on the remainder of the field and stretched that lead to over two seconds by the midway mark. With the third through fifth place drivers working together to close the gap, they would run out of time over the 12-lap heat race. Drew would take the win just ahead of Musgrave as Jason Altzman (Ruthless Karting), Henry Falls-Hand (Mike Manning Karting) and Colby Dubato (PKS) completed the top-five.

Musgrave would get the best of the Senior 100cc field in heat three as he leveled up to score the win ahead of Drew, but a start infraction added three seconds to his total race time and dropped him to sixth in the final tally. Drew would be awarded the win ahead of Altzman, who continued his consistent runs. Dubato improved from fifth to third while Falls-Hand came home fourth. Austin Osborne (Iron Rock) was the big mover in heat three gaining thirteen positions to finish fifth.

Osborne bested the Senior 100cc field in heat four scoring the fastest lap of the race as he took a commanding win. Polesitter Jake Drew crossed the stripe in second while Dubato maintained his position in third. Altzman dropped two positions from heat three to four while Musgrave found his way to fifth to end the heat races.

Heat three saw a trio of drivers break away from the rest of the field led by heat two winner Kai Sorensen, but he could not hang on to the point. Caleb Gafrarar would power his way to the front with two laps remaining and hold off the advances of Cameron Weinberg (Benik) and Sorensen. Sebastian Garzon (AM Engines) gained seven positions to finish fourth while Deligny dropped two positions to finish fifth.

Looking to score the ROK the RIO championship, Gafrarar ended his Friday with the heat four win over Sorensen. Weinberg was able to maintain his top-five results with a third place effort. Ianniello gained five positions to finish fourth while Michael Costello (Benik) found his way forward to score fifth during the final Mini ROK on track session of the day.

Masters Shifter ROK – TB Kart
It was once again the Ryan Kinnear (Phil Giebler Racing) and Jordan Musser (3G / PSL Karting) show in Masters ROK Shifter heat two as a multi-kart pile up happened in turn two on the opening lap. The duo was locked bumper to bumper for the first few laps before Kinnear drew away to take the win by .923. Peter Licciardi (TB Kart USA) led Kevin Woods (Ron White Racing) and Nicolas Bedard (PSL Karting) as they rounded out the top-five.

Heat three would see domination once again by Kinnear and Musser as they finished nearly eight seconds ahead of third place driver Kevin Woods. Bedard gained another position as he continues to move forward to finish fourth while Ryan Yop (Ron White Racing) finished fifth.

Kinnear picked up his third heat race win of the day as Musser was equally as impressive with his string of second place results. Mike Beeny was able to find his way into the top five for the first time today and did so with a stellar drive to third. Woods closed his day with a fourth-place result while Bedard rounded out the top-five.

Senior ROK – Racing Edge Motorsports
It was a Canadian sweep of the top-three in ROK Senior heat two as Ben Cooper (PSL Karting) made a last lap last corner pass on Zachary Claman (Racing Edge Motorsports). Thomas Nepveu (PSL Karting) crossed the stripe in P3 while Diego Ramos (HR Racing) finished fourth. Ryan Norberg (Rolison Performance Group) scored the fastest lap of the heat as the top-five drivers were separated by only 1.271 at the end of the 12-lap race.

Cooper remained on top after heat three as the top-five drivers from heat two remained in the top-five, just with a change in positions for the ones in third through fifth. Claman stalked Cooper to the checkered flag to finish second while Ramos and Norberg each gained one position to finish third and fourth on track. Nepveu was the biggest loser in the top-five shuffles as he fell from third to fifth and will start heat three inside row three.

Looking for revenge from his heat three result, Nepvue drove to the lead and took the win as the front trio stayed in line and drew away from the rest of the field. Claman led early and looked to be in control but fell victim to Nepveu in the late stages of the event but held on for second. Cooper scored a third place result as the front three finished more than three seconds ahead of their competition. Jacob Gulick (Rolison Performance Group) and Patrick Woods-Toth (Prime Powerteam) both worked their way into the top-five.

Junior 100cc – World Karting Association
The top three drivers in Junior 100cc broke away from the rest of the field and had an intense battle on their own. At the midway point, it was Jorge Ortiz (Supertune), Adam Maxwell (Syntech Racing) and Maximilian Opalski (Ryan Perry Motorsports), and they would remain static until the final few laps. With the lead changing a few times in the latter stages, Opalski went from third to first to take the win ahead of Ortiz and Maxwell. Chloe Chambers (Mike Doty Racing) moved herself into the fourth position while Alex Berg (Ryan Perry Motorsports) finished fifth.

Doubling his win count on the day, Opalski went on to take the top spot in heat three as a new driver emerged in the top-five. Adam Ali (Racing Edge Motorsports) advanced four positions to finish second while Ortiz crossed the line in P3. Cole Schroeder (Ruthless Karting) entered his way into the top-five with a fourth place result while Berg added his second fifth place finish of the day. Following heat three, Berg was given a two-position penalty for an on-track driving infraction elevating Nolan Allison into the fifth position.

Six karts battled for the win in 100cc Junior heat four, but it was Maxwell who came out on top, just ahead or Ortiz. Multi-time heat race winner Opalski finished third, solidifying his bid to be named ROK the RIO champion. Caleb Shrader (Rolison Performance Group) made his appearance in the top-five finishing fourth while Alex Berg ended his day in fifth.

Masters ROK – Orsolon Motorsports
It was an intense Masters ROK heat two as an eight-driver lead pack battled it out for the win. Falling to fifth on the opening lap, Renato Jader-David (Orsolon Motorsports) worked his way back to the front to take the win just ahead of OMP Pole Position winner Billy Cleavelin (Rolison Performance Group), who was penalized for a driving infraction and relegated to eighth. Danilo Ramalho (Danilo Ramalho Racing) finished P3 but also hit with a driving infraction, and was classified fifth. Andres Fonseca (PSL Karting) finished third on track but was elevated to second while Tim Meyer took advantage of the infractions to move himself to P3. Michael Auriemma ended his second heat in fourth.

Jader-David took the heat three win by 2.142 of Ramalho, who gained three positions to finish second. Billy Cleavelin put his heat two penalty behind him to advance forward five spots to finish third while Fonseca and Meyer each lost two positions and finished fourth and fifth respectively.

Johnson gained control in heat three driving his way to the front to take the win. Heat two winner Vidmontiene fell one position to finish second with Umana, Wheldon and Dileo rounding out the top-five, as the top-five drivers remained the same from heat two but just swapped positions showing the competitiveness and consistency of the Micro ROK division.

Johnson continued his winning ways in heat four turning his fastest lap of the race on the final circuit. Vidmontiene was able to continue his impressive string of results while Umana finished third as the front three maintained their starting positions when the checkered flag flew. Dileo was able to move his way forward one position to fourth while Carson Weinberg (Benik) ended his day with a fifth place effort.

Silva continued his on his win streak in heat three taking the win by 1.854 over Tim Meyer (Leading Edge Motorsports), who gained four positions in the 12-lap race. Wallace and Coulombe maintained their third and fourth place results from heat two while Eli Yanko (VRS Racing) pushed his way into the top-five finishing fifth.

Tim Meyer saved his best results for the final session of the day as he topped the Masters 100cc class outdueling Silva to the win by .548. Colby Wallace finished in the third position as Rob Kozakowski gained eight positions to finish fourth while Sylvain Coulombe finished fifth.

Junior ROK – AM Engines
With the top-five drivers in Junior ROK battling it out in heat two, it was Luca Mars (Speed Concepts) edging out Enrico De Luca (NF Sports) and Alessandro De Tullio (AM Racing Team). Guilherme Figueiredo (NF Sports) was able to hold on to the fourth position from a hard charging Connor Zilisch (Late Apex Kartworks), who gained eight positions to come home fifth.

Figueiredo continued his winning ways in heat four taking the top spot ahead of Zilisch, who has shown constant improvement throughout the weekend. Mars added a third place finish and looks to be a major threat for the overall win while De Luca and Jeremy Fletcher (Zanella Racing) finished fifth.

Formal found his way back to the front of the Shifter ROK class scoring the heat three win, topping Ramirez who went on to secure the fastest lap of the heat. Remo Ruscitti (Catalyst Driver Development). French continued his consistent results scoring a fourth-place finish while Kyle Wick made some headway gaining three positions to end his race in fifth. David Greco (Goodwood Kartways) had a solid run going and moved his way into third before a mechanical failure on the final circuit forced him to the sidelines. *Heat 4 Shifter ROK results unofficial at time of posting

A complete set of session results as well as starting grids for Championship Saturday can be found on the easy to navigate ROK Cup USA app or by clicking here.

A constant stream of posts via the ROK Cup USA social media pages continue to put the event in front of the karting industry around the world. Stay tuned for more news, photos, information and results by following @ROKCupUSA on Facebook, Twitter and Instagram.