Wave of Success for Parolin at Lonato, Double Podium in 60 Mini 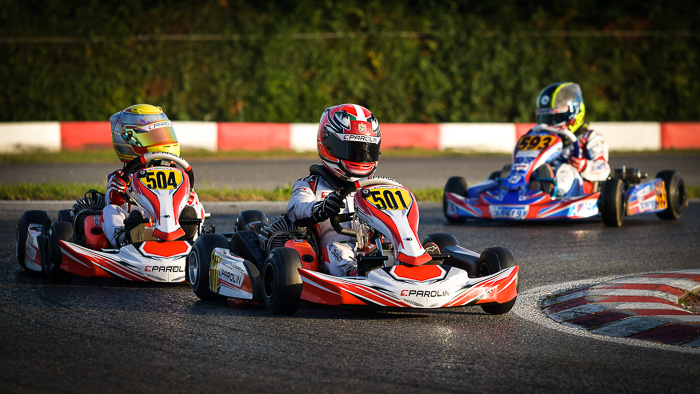 The WSK Open Cup organised at the South Garda Karting circuit started well for the Italian brand Parolin. Its chassis for the Mini classes remains the current benchmark and a look at the result of the 60 Mini Final is enough to be convinced. Almost 40% of the finalists were equipped with a Parolin, half of them in the top 10. The two members of the Parolin Racing Kart team, Rashid Al Dhaheri and Anatoly Khavalkin, made it to the Final podium.

“Our chassis had already taken very good results during the Superfinal of the Rok Cup in the presence of 130 Mini Rok drivers on the same circuit at the beginning of the month,” Marco Parolin rightly congratulated himself. “It is again satisfying to shine in 60 Mini in Lonato for the opening of the WSK Open Cup. Our chassis attracts many drivers and teams thanks to competitiveness on every track. This is once again a topical issue for the WSK’s autumn resumption with nearly 100 young drivers, many of whom have placed their trust in us. It is rewarding to produce equipment that allows all these young people to start karting in the best conditions and to quickly develop their skills.”

The Parolin factory can draw a particularly positive balance of the first of the two WSK Open Cup events with an exceptional presence in the 60 Mini grid. On the Lonato circuit, the performance level of the Parolin chassis was once again remarkable. The three official Parolin Racing Kart drivers qualified for the Final before Rashid Al Dhaheri and Anatoly Khavalkin scored an excellent double in the top three. The young Russian Khavalkin was on the podium for the first time in his first race with the team, which is corresponds with Parolin’s values perfectly.

As early as the Qualifying sessions, the Parolins were at the front of the competition in 60 Mini. The races confirmed the competitiveness of the chassis from Bassano while Anatoly Khavalkin, who was very comfortable within his new team, took the opportunity to set the lap record for the meeting. The Prefinals validated this already high level of performance.

Rashid Al Dhaheri and Anatoly Khavalkin, highlighted themselves in intense battles in a very tight group at the front of the Final. Determined, the Emirati and Russian were fast and efficient until the chequered flag fell, with Al Dhaheri in 2nd place and Khavalkin in 3rd place, while Shimo Zhang of China made steady progress throughout the race to finally gain five places in the Final and finish 22nd. The Parolin factory takes this opportunity to congratulate all the drivers who have used its chassis successfully.

The WSK Open Cup in Lonato saw strong performances in the other categories. In OK-Junior, the Brazilian Matheus Ferreira, a newcomer to the team, was very quick with his new equipment and could congratulate himself on qualifying among the 34 finalists out of the 84 entered. Timoteusz Kucharczyk asserted his competitiveness with the 9th fastest time and held his place at the end of the heats, while Giovanni Trentin and Jesse Alejandro Carrasquedo Parada took the opportunity to enrich their experience. James Wharton saw several setbacks during a weekend that didn’t highlight his usual performance.

Hugo Sasse was very effective in OK after a difficult Qualifying. He consistently improved his position in the heats by posting a fastest lap, as well as in the Prefinal to finish 12th in the Final with a total progression of 16 places since Qualifying.

Still as happy and motivated as ever after taking up karting again, Alessio Lorandi did not fail to fight for the podium in the KZ2 category. A member of the Baby Race team, the talented Italian performed well: 4th in Qualifying, 2nd then twice 4th in the heats and 3rd in the Prefinal. Long fighting for 3rd place in the Final, he crossed the finish line in 4th place in this particularly challenging race.