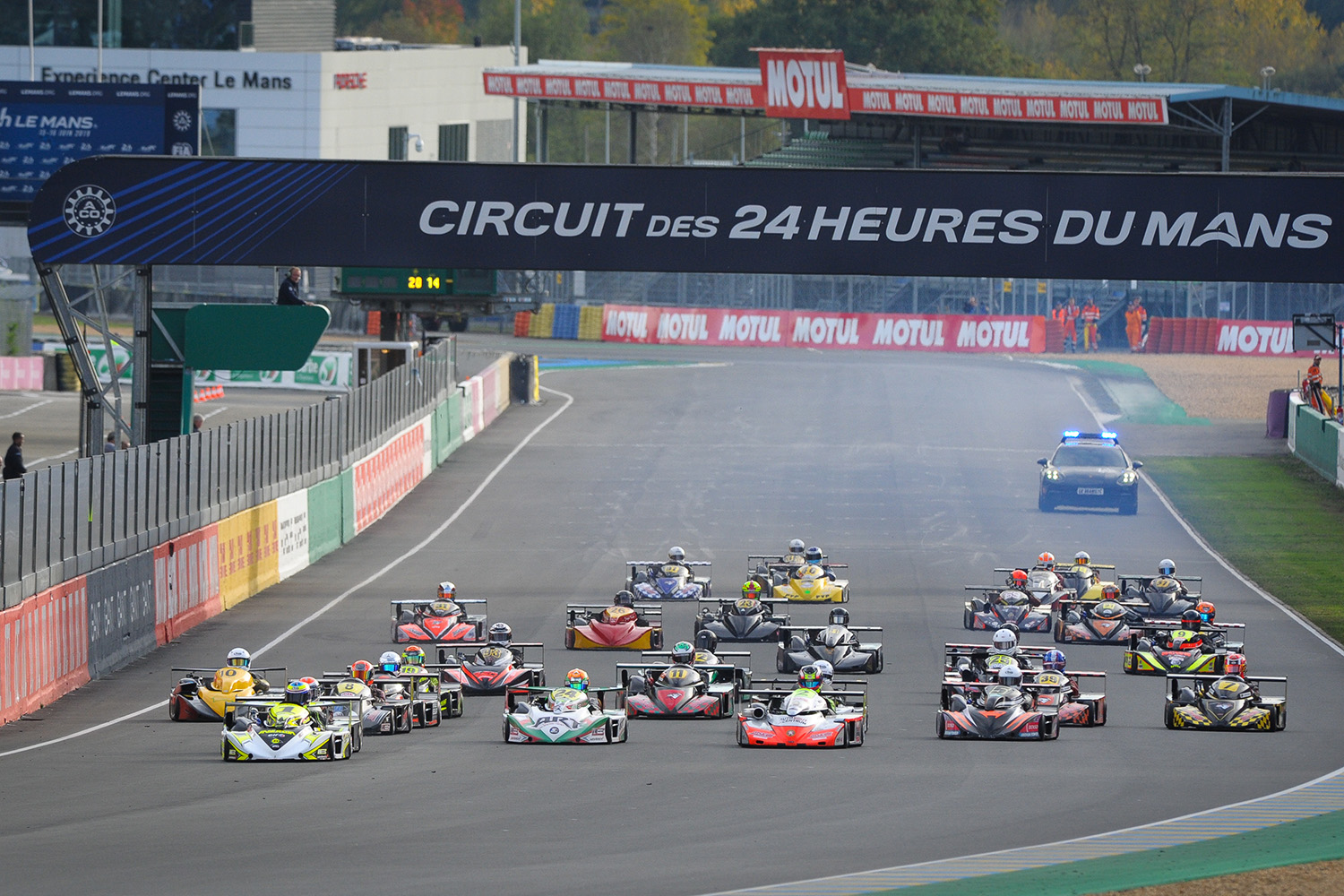 The European Championship FIA Karting – Superkart was held in Le Mans on 26th – 27th October 2019 in a new format of three Races during a single Competition. It gave rise to splendid clashes despite conditions that were not always easy.

The large entry of 33 Drivers, the low number of retirements for mechanical reasons and above all three different track conditions during the three Races allowed many participants to distinguish themselves in different ways.

The Qualifying Practices saw good results for all the favourites without any real surprises. The ultimate favourite, Peter Elkmann (DEU – Anderson/VM) confirmed his status and dominated with 1’32”319, a new circuit record. He took Pole Position with a considerable lead of nearly five seconds. Liam Morley (GBR – Anderson/VM) and Emmanuel Vinuales (FRA – MS Kart/VM) competed for a front row spot. The double European Champion 2015/2016, Adam Kout (CZE – MS Kart/DEA) was far behind in the time trial, but he was still in the middle of adjusting his set-up. Very motivated, Andreas Jost (DEU – Anderson/VM) was nevertheless slightly disappointed, as he was one of the few to take advantage of the second session to improve his time, but only reached the third row along with Alexandre Sébastia (FRA – Anderson/DEA).

During the first Race, in sunny autumn conditions, Kout jumped first. From the first lap, he took the lead ahead of Elkmann, Vinuales and Morley. The latter was losing some ground, while Jost was catching up. Sebastia had started too cautiously. The leading trio seemed to want to escape, but before the halfway point Kout lost the lead in favour of Elkmann and Vinuales. Jost accelerated his pace, overtook Morley and began to come back to the leading pair. Further back, Lee Harpham (GBR – MS Kart/VM) was suffering from understeer. Suddenly, Kout had to stop because of a torn right front tyre, while Vinuales lost places. Elkmann won the race, and in 2nd, Jost nevertheless had to defend himself from Morley’s incessant attacks. Vinuales finished 4th and Sébastia 5th.

There were different circumstances for the second Race, as there was heavy rain and the start was given under Safety Car. Elkmann took the lead ahead of Jost, Morley, Harpham and Nelson Bondier (FRA – MS Kart/VM) who had surprised Sébastia. Uncomfortable with his chassis, Vinuales gradually dropped back. Adam Kout, 29th at the end of the first lap, started a spectacular comeback. He was helped by the second Safety Car period, as the rain was intensifying. For the rest of the Race, a battle raged in the top ten. Halfway through the Race, Elkmann led Jost, Harpham and Kout, closely followed by Bondier, Sébastia and Jaime Zuleta (ESP – MS Kart/VM). On lap 6 Kout took over control. The ninth lap was crucial: Sébastia ceased, Vinuales retired and Kout suddenly lost 4 seconds on standing water. Elkmann took the lead, picking up both the victory and the title. Although slower, Kout saved his place on the podium. Harpham finished 4th, far ahead of Zuleta who had got the better of Bondier.

For the third Race, in which Elkmann did not participate, the start was again behind the Safety Car, but the still soaking wet track saw a very short break in the rain. There was an elimination Race in the pack with several exits from the track. Jost took the lead in front of Harpham who retired on the third lap, then Morley and Sébastia. Kout, who started in the middle of the grid, embarked on a superb climb again. Halfway through the Race he was 2nd. Unfortunately, he had gearbox problems and retired. At that moment Morley, raging, quickly came back to Jost who was trying to defend himself on the penultimate lap. Obviously facing a problem, he gave in and ground to a halt just after the chequered flag. Sébastia finished on the podium. This Race offered revenge for the unlucky ones in the morning. Jason Dredge (GBR – Anderson/PVP) was 4th and Thomas Rushforth (GBR – Spyda/VM) 5th who in particular made some amazing runs.

Only the two best results were selected for the Championship. Peter Elkmann won a fourth title, the third in a row, and thus joined the Briton Dave Buttigieg (between 1976 and 1991) and the legend Martin Hines (1977 to 2002) on the honour roll. Liam Morley was Vice-Champion, as he was in 2017, to benefit from his victory in Race 3, just ahead of Andreas Jost, who had finished 2nd three times. The worst rewarded was Adam Kout, very fast and competing for the podium in each Race, but betrayed by the circumstances.