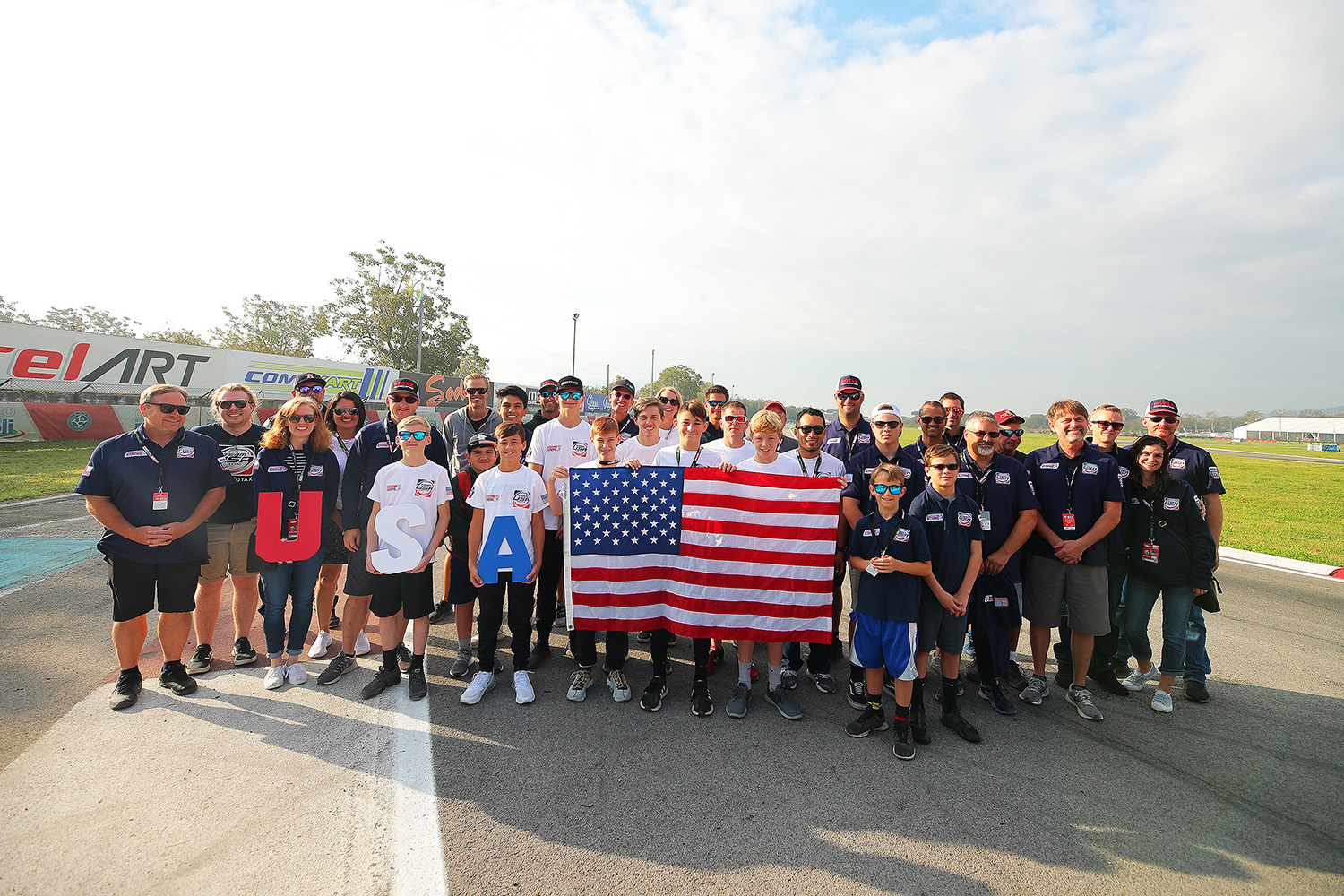 The 20th edition of the Rotax Max Challenge Grand Finals came to a close at the Circuito Internazionale Napoli in Sarno, Italy on Saturday with the six main events contested. The field of 360 drivers from nearly 60 countries at the ‘Olympics of Karting’ were narrowed down to 36 driver fields in each class to determine the world Rotax champions. Team USA had drivers in five of the six divisions, with high hopes for podium finishes in all of them as eight of 14 drivers for the squad did battle.

In the end, Derek Wang has been the top finisher for Team USA in the DD2 Masters category since 2015. This year was a repeat of last year’s finish, placing 9th. Wang was shuffled back to 19th at the start but worked his way forward throughout the 20 laps, and took advantage of some racing on the final circuit to put himself into the top-10.

Luca Mars had the closets attempt to a podium finish for Team USA. Starting 10th, Mars played out the 17-lap main event to near perfection. Making smart moves and not taken high-risk chances, he was up into the second position with four laps remaining. What Mars didn’t know while running second was the driver ahead of him had a three-second penalty for a starting infraction, and thus he was in the provisional lead. Two laps remaining, the leader ran a defensive line and Mars went with him. The third place driver took advantage out of the tight turn two after the long straight, slipping past Mars. A couple corners later, he made a move on the leader and Mars went through to grab second. On the final circuit, Mars went into defense mode after he realized passing the leader was not an option. Luca would cross the line in the second position, only to have it taken away with a pushback bumper penalty. It dropped him 14 positions. Talking with Mars after the race, he believes the nose pushed in during the start in nothing other than shuffling for position.

Brickley led the field to the start of the 10-lap main event but was shuffled back after running off on the exit of turn five. Maier at the same time put himself into the top-10 and the two USA drivers began fighting their way back toward the front. Near the halfway point, Brickley was pushed back out of the top-10 while Maier was leading a group trying to run down the top-three that broke away. One of the leaders fell back to the group coming to the last lap board, and the fight was on. Nearly a dozen drivers went two or three wide at times on the final circuit fighting for that third position. Maier held the spot for one corner, and eventually crossed the line in back in 16th when the dust settled. The third spot ended up becoming the event winner as the top two finishers were handed penalties. That helped to move Brickley and Maier into the top-15 overall.

It was a good end to the week in Italy for Cameron Weinberg. He improved five positions in the 12-lap main event to secure a top-15 finish. Alex McPherson-Wiman bounced around in the race and only lost one position when the checkered flag waved.

The best chance for victory all week was through Ryan Norberg. The RPG driver started the main event in third after winning a heat race and leading the Prefinal. In the first 12 laps of the 20-lap Final, Norberg led twice and was leading on lap 13 when the GBR drivers attacked. Three were in line behind Ryan as they went down the long straight to turn two. Norberg ran the ‘normal’ line and the GBR drivers went to the inside. The first was just able to get inside Norberg by the apex and the second pushed wide on the exit and into Norberg, shoving both off the track. Ryan actually kept two tires on the track and was on the gas to regain the momentum until another driver drove over top of his right rear. A number of parts on the kart was bent up after the contact, and Norberg muscled the kart to the finish. Jace Denmark-Gessel carried the USA flag from that point and was into the top-10, leading the way for the squad for a great end to the second week in Italy.