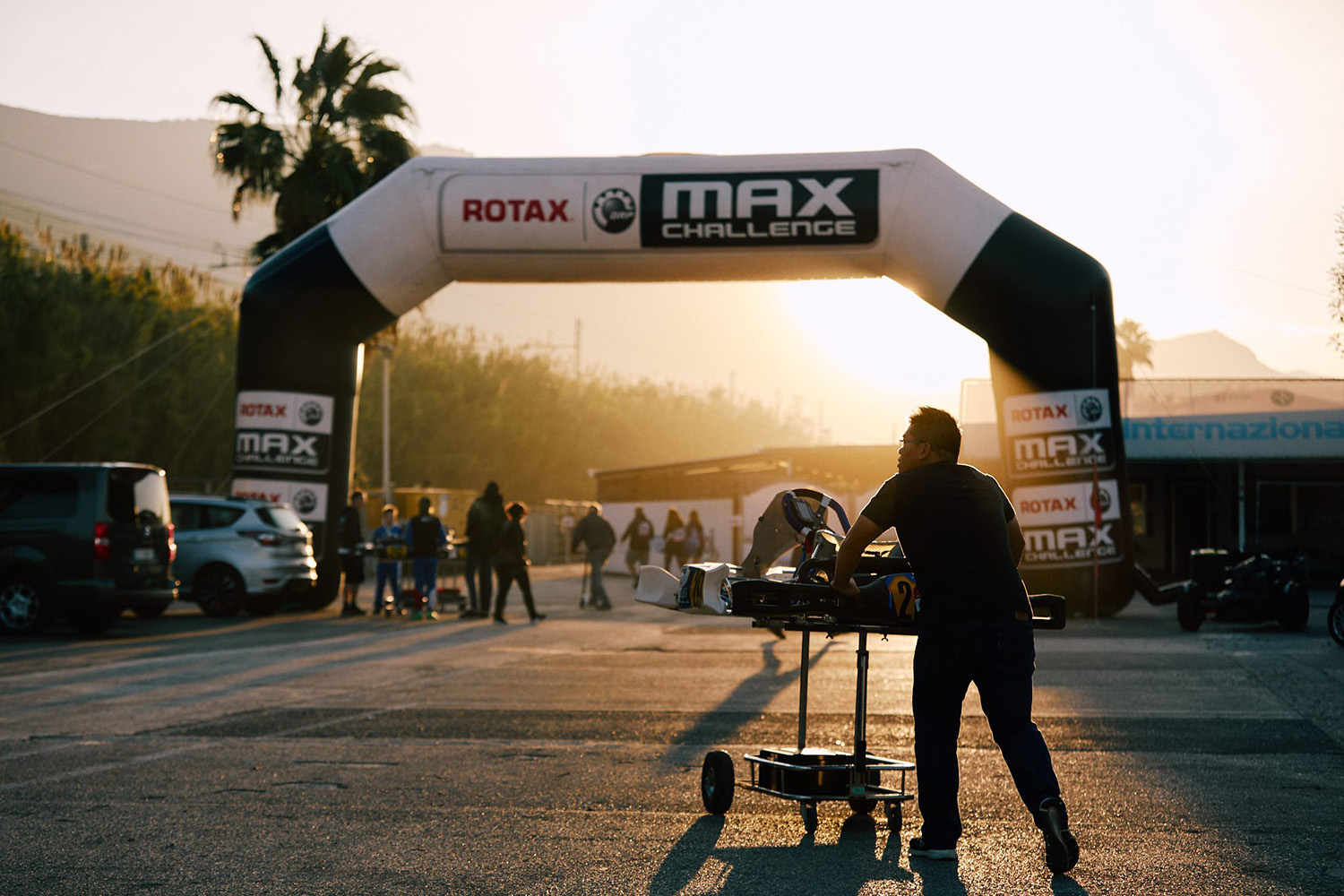 Welcome back to the sixth day of the RMC Grand Finals in Sarno, Italy. The pre-finals started today and we enjoyed a vast numbers of battles and exciting races. The participants for the finals tomorrow are set and we can’t wait to see the drivers parade and enjoy the finals tomorrow. Good luck to all drivers!

But let’s have a look at todays happenings:

The Micro MAX pre-final saw Macauley Bishop start from pole position with Griffin Peebles alongside.  Bishop got off to a good start but was overtaken by Peebles on lap 2. Peebles continued to lead lap 2 and 3 before Adam Brickley overtook him. Despite a challenge on lap 6 from Enzo Nienkotter, Brickley was able to take the win from Urwin who made up 8 places to finish 2nd and Jaxson Burns 3rd.

Mini MAX
The Mini MAX warm-up was topped by Andy Ratel who set a 1:05.384 secs.  He was followed by Simon Kristensen in 2nd and Adrian Malheiro Sune in 3rd.

The Mini MAX pre-final saw Ratel starting in pole position with Malheiro Sune on Position 2. Ratel held the lead for the first few laps but was challenged by both Raccamier and Thien.  Raccamier led for the majority of the race until he was overtaken by Thien on lap 8. On the final lap with Thien leading, Raccamier attempted a late overtake into turn 9 causing both drivers to run wide and handing the victory to Ratel

Junior MAX
In the odd-numbered warm-up, it was Lucas Bohdanowicz (1:01.338) who led the field from Filip Jenic and Vigor Hjorvard.
In the even-numbered warm-up, Beau Pronesti went fastest ahead of Gregorio Bertocco and Hitoshi Sakai.

In the Junior MAX pre-final A, Osborne was on pole.  The race was red-flagged due to an incident at turn 2 before being re-started a few minutes later. Oli Pylka took the lead from the outside row until Hugh Barter got into a scrap for 1st place with the lead changing many times, but it was Pylka who took the win, Barter 2nd just 0.136 seconds behind and a great final lap for Fedor Bykonya put him into 3rd.

The final race of the day for the Junior MAX was the Pre-Final B where Charlie Wurz lined up on row 1 with Sacha Maguet.  Wurz got off to a good start and led convincingly for the first 7 laps.  During this, Jason Leung who started on position 4, was making up places and closed in on the Austrian. On lap 8 Leung took the lead, Wurz unable to find a way past.  A battle for Sacha Maguet throughout the race saw him finish 3rd.

Senior MAX
The odd-numbered Senior MAX warm-up was led by Patrick Rundquist who set a time of 1:00.408 secs.  Vincent France was 2nd and Titus-Shanghai Schmidli was 3rd.
The even-number practice was topped by Cody Gillis with a 1:00.378 secs over Oakley Pryer and Bence Valint.

Senior MAX Pre-Final A grid had France on pole position with Pryer alongside.  Clayton Ravenscroft and Elia Galvanin on row 2.  France led the first two laps before Pryer took over and Axel Charpentier moved through to 2nd. Ravenscroft and Guy Cunnington then worked together to reel in Pryer, and fought for the lead for the next 8 laps. The race finished with Ravenscroft winning with Cunnington 0.106 seconds behind in 2nd and Pryer in 3rd making it a British top 3.

The last Senior MAX race of the day was Final B led by Axel Saarniala, Ryan Norberg and Rhys Hunter, who got off to the best start, followed by Norberg.
The pair worked together to pull a gap over 3rd placed Aleksander Bardas to avoid a slipstream effect. This worked well and on the final lap, Norberg attempted to pass Hunter. At turn two with both frontrunners going wheel to wheel, but Norberg couldn’t quite complete the job. Hunter won the race from Norberg and Lachlan Robinson in 3rd.

Antti Ollikainen led from pole position for the DD2 Masters Pre-final A. On lap 1, Henrijs Grube took the lead with Ollikainen close behind. Grube led for next 6 laps until Rudy Champion past him and went on to take the win. Grube knew the winner was not a threat to his finals chances and remained second with Troy Bretherton on 3rd. The best lap was set by Derek Wang (59.570).
After an outstanding week, Ollikainen was not classified in the pre-final after an issue during the race resulted in the kart not complying with the technical regulations. Overall he ranked 38th which means he will not make the Final on Saturday.

Pre-Final B started with Matias Rodriguez on pole position with Eriks Gasparovics on P2.
Rodriguez got a flying start from the inside row to take the lead over Gasparovics and several laps later, Roberto Pesevski made his move for 2nd placed and held it for the remained of the race.  With no further changes in the top three, Rodriguez took the win from Pesevski, who both set their best time in the final lap, but the Austrian was fastest. Gasparovics finished 3rd.

DD2
The odd-numbered warm-up session was topped by by Jonathon Marcusson with 59.136 secs., Alejandro Lahoz Lopez 2nd and Maxi Fleischmann was 3rd.
The even-numbers Matias Milla went fastest with 58.908 secs from Christos Oikonomou  and Daniel Machacek.

The Pole position for pre-final A was Petr Bezel and French chapion Nicolas Picot on grid position 2.  Picot got the better start and led the first few laps before Bezel in the 445 kart took the lead for the following 5 laps. Picot managed to pass him and go on to take the victory ahead of Bezel and Machacek in 3rd, he started on grid 11.

Pre-Final B saw Luca Munaretto on pole beside Lucas Joly, but it was Xen De Ruwe who had an excellent start coming from P4 to 1st.  After 7 laps the Italian based Munaretto retook the lead was unable to be beaten to the chequered flag. De Ruwe was to 2nd and Alejandro Lahoz Lopez took 3rd place having started in 9th.

Last race of the day was the Rotax THUNDeR karts Pre-final 2. And it was Ferati who got into the lead and remained unchallenged till the end. Championchip leader Wloemer crossed the line in 2nd and followed by guest driver Kao from Taiwon in P3. Ferati also set the fastest lap of the race (1:04.677).

Stay tuned for our upcoming daily reports, which bring the intense action of the RMCGF to you!

For more information about the Rotax MAX Challenge, please visit our website.