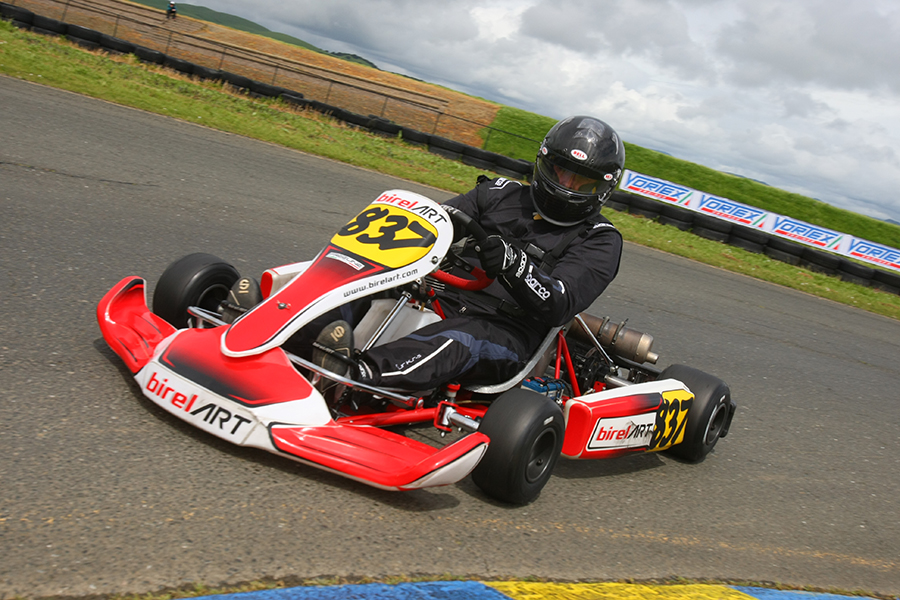 EKN Editor-in-Chief and Publisher Rob Howden turned his first race laps in almost two years at the Challenge of the Americas finale at Sonoma in April
(Photo: Sean Buur)

With a regularly packed schedule of over 25+ races on my annual travel calendar, I will normally jump at any chance to strap on the helmet and compete. Sadly, I didn’t get an opportunity to drive in a single kart race in 2018, and it was the first year since I started karting in 1995 that I didn’t compete at least once. Last December, I made a promise to myself that I’d book a couple of races for David and I so that we could feed our passion for driving. Open weekends don’t always line up with the events I really want to attend, but thankfully, the 2019 re-scheduling of the IndyCar race in Iowa eliminated the conflict that I had with the USAC Karting Battle of the Brickyard in July, so that was the first confirmation for 2019. Then, when the Cup Karts North America Grand Nationals 3 at New Castle was moved to the first weekend of October, ending the conflict with the Streets of Lancaster Grand Prix, it was immediately added to my spreadsheet. Those races took place in July and October, so I flat jumped at the chance to drive in early April at the final round of the Challenge of the Americas at the Simraceway Performance Karting Center in Sonoma when Andy Seesemann sent me an email with an idea and an offer. 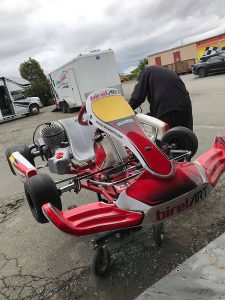 The COTA event was the last component of the ‘EKN Dual Weekend Double Double’ stint that David Cole and I scheduled at the end of March and beginning of April, covering four races over two weekends. With David in Florida managing our EKN Trackside Live coverage of the United States Pro Kart Series opener in Ocala, I was tasked with handling the live broadcast production and coverage in Sonoma alongside long-time SoCal karting announcer Tim ‘Chappy’ Chapman. I hated not being on the mic, but it also opened the door for Andy to serve up the opportunity to sample the new ROK VRL100 engine. The plan was to run one of Andy’s Full Throttle Karting Birel ART RY30 chassis in the 100cc Masters class, which had drawn only a single entry in its series debut over the first two weekends.

Canadian Jimmy Gregory made his Challenge debut in 2018 in the Briggs 206 class, bringing a contingent of K&K drivers down from Alberta to have some winter fun. This year, with the COTA series dropping of the Briggs categories, Gregory jumped into the 100cc Masters class with the ROK VLR powerplant. After running as the sole entrant in the category for the first two races, Andy’s idea was to have me run with Jimmy to give him some competition while I got a taste for the new engine. My announcement drew a couple more drivers into the fray, and we had four entries for Sunday’s racing. I certainly expect to see the 100cc class to grow for this winter’s 2020 Challenge of the America, and I’m not surprised to see the new 100cc engines bringing people to the track. I had an awesome weekend behind the wheel.

Let’s start with a quick look at the engine package. The ROK VLR is a single-cylinder 100cc two-stroke reed valve air-cooled motor, utilizing a centrifugal dry-clutch and an integrated electric starter to provide the user-friendly touch-and-go (TaG) option. The package uses a 24mm butterfly carb, a Selettra analogic ignition and a Vortex intake silencer. The engine weighs in at 45 lbs. With a max rpm of 16,000, it will make a max horsepower of 20 at 9800 rpm. The new ROK VLR engine retails for $1650 USD, and comes complete, ready to race minus the engine mount.

The Birel ART RY30 S10 is the company’s model suitable for 100cc and 125cc TaG competition, and features a couple of upgrades from the S9 edition, including new material, an evolution in the steering column adjusting system and a new pedal positioning approach. 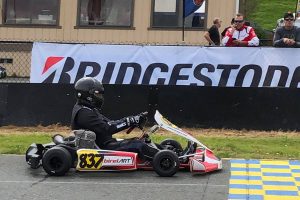 Having been out of the seat for so long, Rob used every session of the weekend to get up to speed, closing his gap in pace to the leader each time out
(Photo: Angel Matta)

The early-April Challenge of the Americas finale in Sonoma often sees a little rain, and we had some that Friday and Saturday, which certainly made things interesting. I was using some new Sparco gear for the weekend, and the accompanying T1 rain suit was put to use. I can say that all the Sparco gear that I was testing was super comfortable. I was using the Robkur KX5 suit ($419), which I found extremely comfortable. The suit has full floating sleeves and a back stretch panel, which made it fit like a glove, even though I was pushing my sizing estimation. Thankfully, I dropped about 10 pounds from the Sonoma weekend and the suit felt even better at the Battle at the Brickyard and Texas Pro Kart Challenge events in July. I also liked the leg and underarm vents on the suit. It wasn’t overly warm that weekend in Sonoma, but it was in Indianapolis and Amarillo in July, and with the black suit, the vents came in handy. I can’t say a single negative thing about the Tide KG9 gloves ($160) and the Omega KB6 boots ($170) I used. The gloves have external seams, so they’re super comfortable and the palms and fingers utilize Sparco’s exclusive Advanced 3D HRX material that increases grip and absorbs vibration. Let me add that I wore the boots all weekend, as I simply walked from my kart back to my laptop in the scoring building before and after each session, and the boots were super comfortable. They’re incredibly light and the pedal feel was excellent. This was also my first run with the Bell Racing USA RS7 Carbon helmet. In all my years racing, I’ve never had a helmet this light.

Overall, my weekend in the Birel ART RY30 went well, and I was able to find more and more speed throughout the event. I found the chassis to be extremely well-balanced running the Bridgestone YLCs, although my mechanic Erik Tomsons didn’t need to do much in terms of set-up changes. I firmly believe that it makes no sense to adjust the chassis until the driver is running at somewhere close to 90%, and I was picking up a half-second or more each time out as I got back up to speed. As I stated earlier, I didn’t drive anything in 2018, so I’ll admit that I was a little rusty. I’d also not actually raced a two-cycle kart in over 10 years, so I was adjusting to the quicker pace and worked primarily to shorten my braking zones while carrying more corner speed. 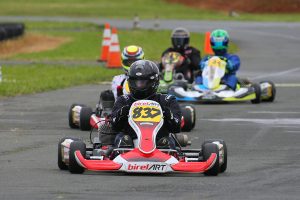 Rob found the Birel ART RY30 extremely balanced and he loved the power hit of the VLR100 coming out of the corners
(Photo: Sean Buur)

The ride itself was just fun. Having not wheeled a two-cycle kart in anger in a few years, it should come as no surprise to anyone that I enjoyed the power hit when I rolled back on the throttle at corner entry. As a four-cycle driver, I can state that the VLR100 rips out of the corner and keeps pulling, which is obviously a different experience from the Briggs 206, which is all about momentum. Sonoma is an incredible track and it’s extremely smooth, although I’m thankful that I was wearing my Ribtect 4 rib protector, which most definitely heightened my overall enjoyment of the weekend. Tic-Tac-Toe is an aggressive corner with the curbing and the helipad section that follows features a hard shot to the ribs when exiting. Every time the kart bit and I felt the shot to the left side of my ribs, I smiled and toasted my Ribtect. The complete absence of rib pain and the accompanying comfort allowed me to complete every lap, getting quicker and quicker throughout the weekend. 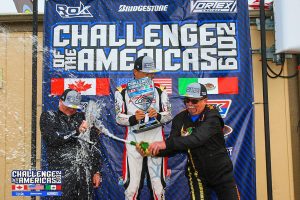 After a couple of second place finishes in the 100cc Masters class, Rob could not fend off Jimmy Gregory’s attack on the podium
(Photo: Sean Buur)

Once we went racing, my goal was to simply stay as close as possible to Kalvin Chen, who led our four-driver fight all weekend. I was closing on Kalvin’s times by a couple tenths a session, and my best run was in the Sunday Prefinal when I was able to hang with him decently close for the first half of the 15-lap. My fastest lap was less than two tenths off his, so I called that a ‘win’ to a certain extent. I ran one set of Bridgestones through the entire weekend, so my times had essentially stalled and I couldn’t maintain the pace in the main event. We raced with the five guys in the 100cc Senior class and they certainly made the starts exciting, but amidst the chaos, I came home with a couple of second place finishes and a memorable weekend.

Having now driven and competed with the engine, I’m certain that these new air-cooled 100cc TaG packages will continue play an integral role in our sport. The formula slots nicely in between the Briggs 206 and the much more aggressive 125cc liquid-cooled TaG packages like the ROK GP, IAME X30 and Rotax Max FR125 Evo. We’re seeing massive growth in many areas with the 100cc packages and I certainly hope to get the opportunity to pilot one again. 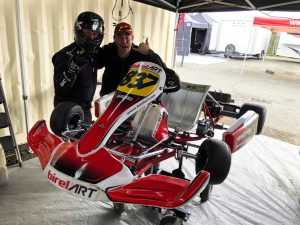 Rob was thrilled to work with long-time friend Erik Tomsons throughout the weekend
(Photo: EKN)

I want to offer a huge thanks to Andy Seesemann from COTA and Full Throttle Karting for offering up the ride and to Erik Tomsons for wrenching on my hot rod all weekend. It was fun racing with ‘Uncle Jimmy’ Gregory as well and I hope to get the chance to do it again during the 2020 Challenge of the Americas.

That said, next year’s COTA kicks off on January 24-26 at the Musselman Honda Circuit in Tucson. The second round moves to CalSpeed Karting in Fontana, CA on the February 21-23 weekend. The finale will once again take place at the most picturesque facility in American karting on the March 25-27 weekend, a week earlier than this past year, at Simraceway Performance Karting Center. In speaking with Seesemann this week, based on the discussions he’s had with those in the industry and racers who ran this summer’s California ROK Challenge, he’s expecting to see strong growth once again with an overall entry target of 140 drivers at the opener in January. The 100cc Masters class has grown throughout the season in Southern California, which bodes well for the Challenge. Hopefully I’ll get a chance to get back out in the category again in the future.