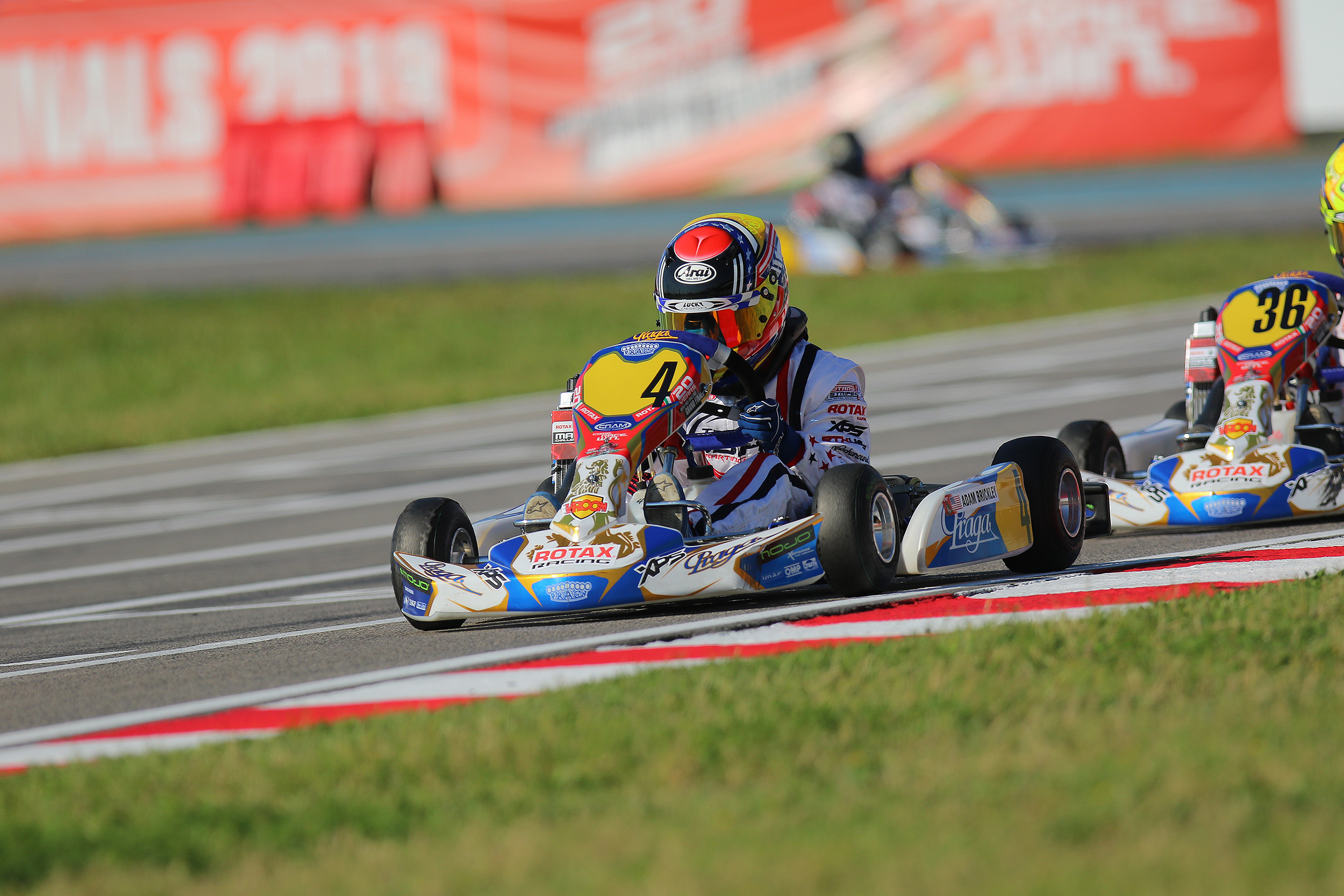 All six fields of 36 drivers are set for the 2019 Rotax Max Challenge Grand Finals main events. Friday was the time for all of the 360 drivers to cash in all their chips to see where they would come out after the Prefinals. For some, it was a transfer into the big show, for others, it was the final laps for their trip at the ‘Olympics of Karting’ held at the Circuito Internazionale Napoli in Sarno, Italy. The 360 drivers from nearly 60 countries were narrowed down to fill out the final grids to determine the 2019 world Rotax champs. For Team USA, eight of the 14 drivers representing the Red, White and Blue will suit up for their respective main events.

Top-15 is the likely position in the Prefinal drivers want to finish to ensure they make the show. Hewitt started just a few spots out of there, and ran as high as 18th before shuffling back to 21st. In the end, Hewitt was over the mark by five points, and thus ends his first RMCGF short.

One of the three drivers for Team USA will be in the big show on Saturday. Derek Wang did exactly what he needed to do, clear the start, stay out of trouble, and ran at the tail of the lead group in his Prefinal. While he only gained two spots overall, he starts inside the top-15 and is on the inside lane for the main event. Both Tim Shutt and Nathan Mauel showed good pace in the warm-up sessions, but ended up tied in points and four spots short of transferring in. Mauel was on the bubble going into the Prefinals and contact on the opening lap of his race put him to pit lane before completing the lap. Shutt was able to climb his way up to 15th and potentially into the Final, however, contact dropped him down the order on lap nine. Add in the pushback bumper penalty and his bid for the Final came up short as well.

The opening Prefinal had one Team USA driver in it – Connor Zilisch. The race was about surviving, and unfortunately, he would not make it past the second corner. One of the worst starts of the Prefinals, the field went into the tight corner at the end of the long straight all scattered around and making low-percentage moves. Zilisch was a victim as one driver went over on top of him, and over onto his head. Connor was slow to get out as others restarted and joined the field stopped on the main straight with the red flag displayed. Zilisch would not restart, and thus record maximum points to miss out on the Final. Joshua Pierson worked his way up to 20th after falling back at the start of Prefinal B, and fell down the order in the points as a result, ending his debut second trip to the RMCGF early. Luca Mars will carry the Red, White and Blue into the Final tomorrow, coming off a great Prefinal. Starting sixth, he was up to second at one point in the race but kept things safe to finish sixth. The result kept him in 10th overall and he will start the Final from the outside of Row 5.

After two heat races, the Micro Max category held its lone Prefinal. For the first time all week, Adam Brickley got a taste of leading at the RMCGF. He started from Row 2 and fought the entire 8-lap distance to hold off a group of drivers on the final circuit to take the victory. Brickley was the lone USA driver to win a Prefinal. Ben Maier, looking to bounce back from his two tough heat races, improved nine spots in eight laps to start the Final from inside Row 9.

Cameron Weinberg had his best race of the week in the Mini Max Prefinal, climbing his way up to 15th. A pushback bumper penalty dropped him four spots, and starts from inside Row 10 in the Final. Alex McPherson-Wiman improved seven spots in the eight laps, and needs a little more to finish inside the top-20 in tomorrow’s main event.

There is no question that Ryan Norberg is a contender for the podium and the victory. Norberg fought off the outside Row 1 starting position to put himself into second after the opening laps. From there, he played out a strong strategy of pushing the leader away from the rest of the field. They worked away from the battle behind them, with Norberg crossing the line second. It moved him to third overall in the points and now the inside of Row 2 for the main event. Jace Denmark-Gessel stayed clear of issues in the Prefinal A and trailed the lead group, improving his starting position to Row 8. Travis Wiley was not able to pull off a strong drive in Prefinal B, and came across the scales underweight to conclude his RMCGF debut.