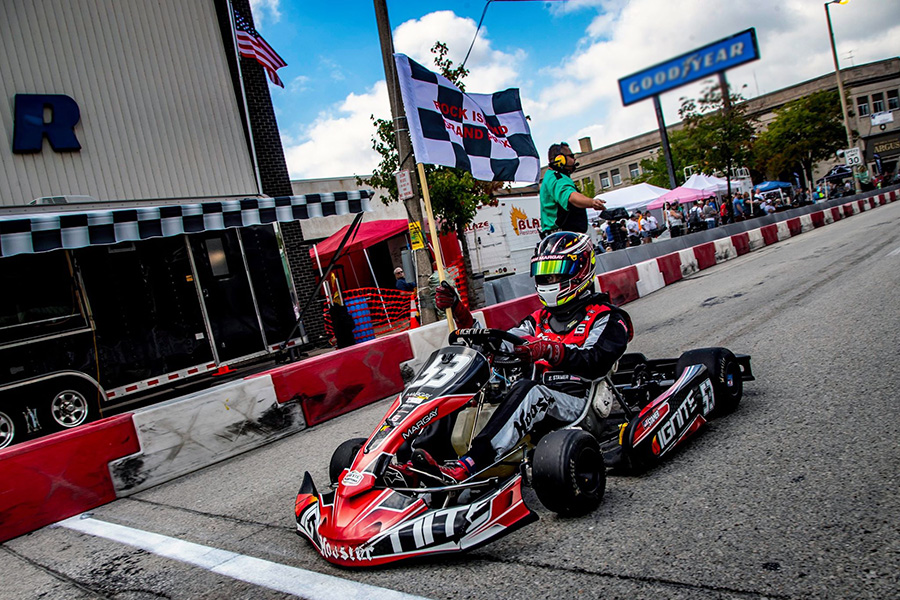 One of the most coveted trophies in North American karting is the Rock. Winners at the Rock Island Grand Prix receive this unique trophy for winning a class at the world’s largest street race. The Labor Day festival hosted its 25th edition in September, welcoming 278 entries in the 16 categories. Three drivers were able to secure their first victories on the city streets along the Mississippi River with Illinois driver Evan Stamer earning his first two.

What a difference a year makes. Stamer was limping around the paddock in 2018 after suffering a broken ankle in a crash during the heat races. Yet he continued to race on the weekend, placing 7th in Ignite Senior, 9th in Briggs 206 Medium and 7th in Briggs 206 Medium 2. The now 18-year-old upped the ante by racing in four classes for 2019, and placing inside the top-two in all. 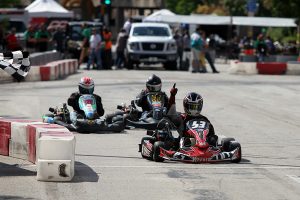 The first class in the order for Stamer was Margay Ignite Senior. The past four years for the class had seen four different winners. The heat race was a duel with 17-time RIGP winner Tony Neilson as the local hero came out on top. The main event, Stamer sat on Neilson’s bumper for the first 14 laps before pulling the trigger to steal the lead on the final circuit and earn his first RIGP victory by 98 thousandths of a second. Neilson was one of the first people to congratulate Stamer on the win after he finished his victory lap.

Only three classes later was the new Ignite Senior 2 class, providing a second opportunity for the Margay drivers to compete on the street circuit. Stamer led the majority of the heat race until he was shuffled back by Neilson and veteran Pete Vetter. Due to the point structure of passing points and position, Stamer started back in eighth and fought his way forward. He was able to get back up to the leaders, and on the last lap, move up to second. The difference was just 77 thousandths at the line behind the winner Vetter.

It was a quick jump out of one kart, and into another with Briggs 206 Medium class next. Drawing a dead last start for the heat race, Stamer drove his Margay Brava 206 up to fourth. The positions gained and finish put him on the pole position for the main event. The top spot was short-lived as RIGP Emperor Gary Lawson added to his 25 win total with a wire-to-wire victory. Stamer drove a similar pace, and held second the entire distance.

A new class to the RIGP was the Briggs 206 CIK division, limiting the bodywork on the Briggs karts. Stamer changed out his Hoosier R80 tires for the Hoosier R60B compound on his Margay Ignite K3 chassis that ran both Ignite classes. Stamer ran fast lap of the heat race and came across the line in third. It was the same drivers fighting for the top spot in the main event. Stamer made a last lap move to take over the lead and scored the victory for his second victory of the day.

In total, it was two victories and two runner-up results for the Margay driver. It was a busy and successful month outside of the RIGP for Stamer, winning at a KRA club race at New Castle Motorsports Park, a victory at the Gateway Kartplex SuperComp event and finishing first and second in the two main events for the Ignite Challenge race at TNT Kartways.

Stamer went on in October to finish second in the CIK Heavy class at the Cup Karts North America Grand Nationals 3, and then take part in the first ever Skip Barber Racing School class at the Indianapolis Motor Speedway. To round out his CV for 2019, Evan has been competing in some Road Racing events, driving in a laydown Yamaha kart alongside veterans Randy and Rick Fulks. His plans are to continue with more laydown racing this year and next, along with continuing to with his Briggs racing with Margay. There is some possibility of doing car racing in 2020. 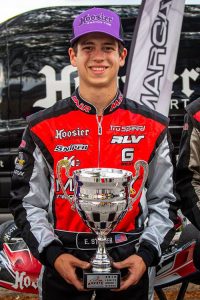 Chassis: Margay
Engine/Engine Builder: Briggs and Stratton 206, KA100/Switch Racing Engines
Sponsors: Margay
Series You Compete In: Ignite Challenge, Supercomp at Gateway Kartplex, Route 66 Sprint Series, Superkarts! USA, Cup Karts North America
Years Karting: 7
How did you get started in karting? Saw Margay’s booth at the STL Auto Show and called them the next day asking for a shifter kart at the age of 11. Keith Freber then told me I needed an Ignite K3 first and have been racing on an Ignite K3 ever since.
What has been the high point in your racing career? Competing at the SKUSA SuperNationals against the best in the world.
What are your goals in racing? Get as much experience out of karts as possible and gradually move into different sports cars or open wheel.
In a few words, how would you describe your driving style? Patient but aggressive when need be.
Funniest moment at the race track? When I had a really rough race with someone and I get out of my kart at the scales and Greg Dingess tells me “you might want to keep your helmet on for this one.”

What do you do when not at the track? Watch go pro videos on YouTube to get ready for the next track I will be at and also get on the simulator and do some iRacing stuff.
What are your goals outside of karting? Get a good education and also pursue some car racing.
What type of street car do you drive? Scion FR-S
What type of street car would you like to drive? Porsche GT-3rs
What are your pet peeves or things that irritate you? Traffic and people who drive under the speed limit.
What do you think could be done to improve the sport of karting? Make it more cost efficient and provide more programs that could introduce more people that have no idea what karting is, to the sport.
What are your favorite aspects about the sport of karting? The adrenaline that comes with it. The super close, side pod to side pod, racing where you can still bump and rub the other opponents without instantly breaking something. and also how easy it is to just load up your kart with some tools and head to the race track without breaking the bank.