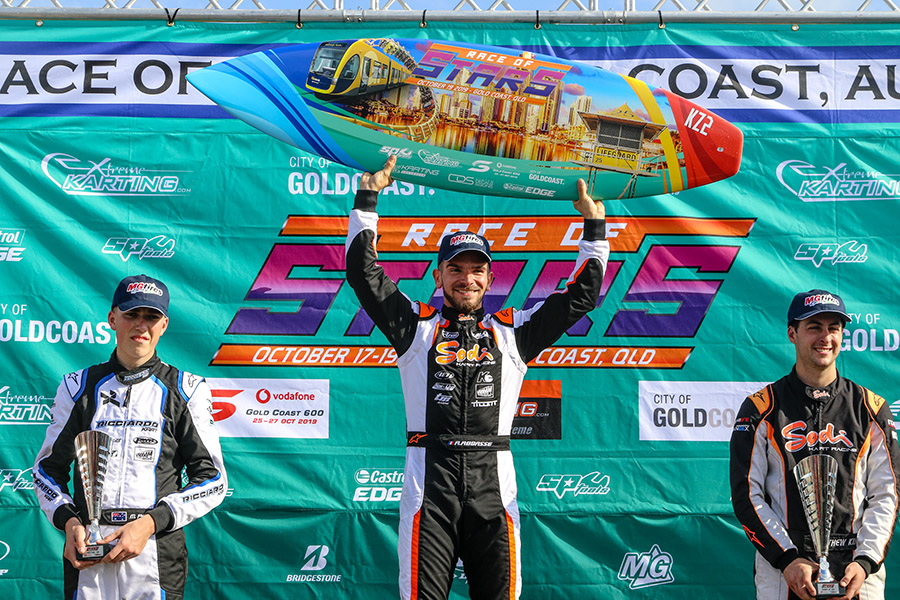 Anthony Abbasse standing on the top step of the podium at the 2019 Race of Stars
(Pic: Pace Images)

Frenchman Anthony Abbasse has taken out his second consecutive Gold Coast 600 Race of Stars at the Xtreme Karting Complex for the SodiKart factory team after a remarkable series of events that saw the race decided after the chequered flag.

Abbasse led the entire journey for all but two metres around the Xtreme Karting facility before New Zealand Patrizicorse Ricciardo Kart driver, Matthew Payne rounded him up as the chequered flag flew. Payne crossed the line 0.005s in front of Abbasse, but was later docked two positions for a bodywork infringement sustained early in the 15 lap affair, thus promoting Abasse to the win annexing the quinella for the French manufacturer with seven times New Zealand Champion Mathew Kinsman elevated to second.

Throughout the race, Abbasse looked comfortable for the most part, his lead opening out to almost two seconds.

He used his pole position to run away at the start. SodiKart occupied three of the top four positions on the grid with the other belonging to the JC Kart of five time World Champion, Davide Fore. Fore followed Abbasse from the line, however was rounded up in consecutive laps by Kiwi, Mathew Kinsman and young Australian Kye Cavedon, who only joined the team midway through this year.

The story of the race though was the advancement of Payne from seventh off the grid – having his start position compromised after not finishing the final heat this morning.

Payne scythed his way through the field producing many incredible moves, including his daring outside pass on Kinsman midway through the race at nearly 165kph through turn one!

The 17-year-old was able to close the gap and took the fight to the two time World Championship runner-up literally to the finish line.

The Jim Morton Perpetual Trophy – which is presented to the best Australian competitor in the international Invitational event was won by Victorian, Kye Cavedon – adding to the SodiKart silverware. It was Cavedon’s best run since joining the KZ2 gearbox field and in a special moment, the trophy was presented to the 17-year-old by Jim Courtney – a good friend throughout the years of the late Morton and father of double World Champion and Walkinshaw Andretti United Supercars driver, James Courtney.

The elite junior KA2 class was taken out by EVO Kart driver, Adrian Haak, who continued his good form from yesterday.

The New South Welshman didn’t have it all his own way in the final though, being pushed right to the line by Ethan Feather. The Queensland Parolin driver crossed the line a mere 0.09 behind Haak at the chequered flag. Second generation racer Oscar Targett came home in third placing aboard his JC Kart after a last corner, last lap battle for the final place on the podium.

Brendan Nelson became the first three-time Race of Stars winner in the one category when he took out TaG 125. While Nelson got the jump from the start, it didn’t take long for his closest rival throughout the weekend, Marc Tulloch to close on in. Gold Coaster Tulloch then pressured Nelson for the majority of the race and tried to get past on the final lap, however Nelson crossed the line 0.056s in the lead. Cody Brewczynski emerged third after a multi-kart race long battle for the minor positions, beating home Tyler Howard and Jackson Souslin-Harlow.

Kurtis Tennant walked away from the Race of Stars with two podiums from two Junior categories including a dominant win in KA3 Junior.

Tennant won the race by 1.5 seconds in the end. Coming home in second place was Ty Spencer with Thomas Gallagher completing the podium in third.

Queenslander Tennant went perilously close to walking away from the weekend with two of the iconic surfboard trophies in KA4 Junior when he finished second in one of the finishes of the day.

The winner was newly crowned Australian Champion, Kobi Williams – who’s margin of victory was just 0.049s. South Aussie Christian Cowie put in a stellar effort to come third, while the fourth member of the quartet was Joe Fawcett.

Jace Matthews added another surfboard to his collection becoming just the second driver to win a Race of Stars event as both a Junior and Senior competitor.

He took KA3 Senior by just 0.022s from Victorian veteran, James Sera who made his return to national competition this weekend.

Sera made full advantage of a front row start to be in the top three throughout the race which included Matthews’ younger brother, Declan.

Declan ultimately crossed the line third before a front-fairing infringement dropped him to fifth position, which allowed Bailey Sweeny to get on the Race of Stars podium.

Australian Cadet 12 Champion, Harry Arnett continued his great form in season 2019, adding the Race of Stars to his list of wins. The category, which was at maximum capacity saw Arnett not headed during the course of the final this afternoon. He was pressured late in the race by Queenslander, Lincoln Taylor, however held his nerve to take the win on his first entry to the iconic Gold Coast event.

The Gold Coast 600 Race of Stars has once again delivered an outstanding event to kick off proceedings leading into next weekend’s Vodafone Gold Coast 600 on the streets of Surfers Paradise as the first official off track event.