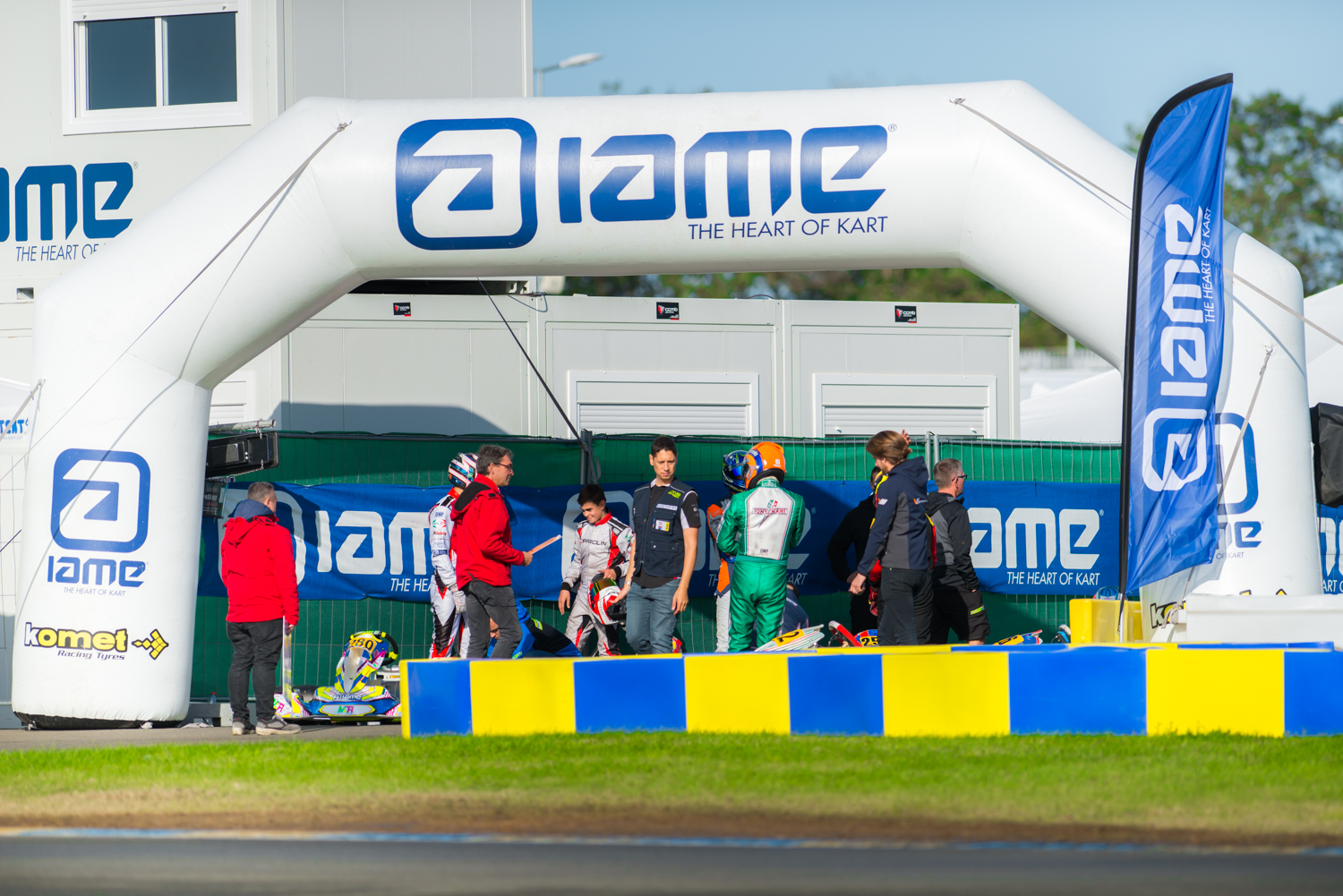 Friday was situation day for the 2019 IAME International Final as the 34-driver grids are now set for the seven categories moving into the final day of action at the Le Mans Karting International circuit. It was likely the best day in terms of weather with the early hours wet and drying out for the final heats and the C-main and B-main events. Those final heat races set the heat points for all seven categories, and deciding who would have to try and race their way into the big show on Saturday for Mini, Master, Junior and Senior. Only the winner of the B-Main would have the opportunity to fill out the Prefinal grid, thus setting up for some wild racing at the end of the day. After the final checkered flag fell on the day, only five of the 15 drivers representing North America – including IAME USA East and IAME USA West – are racing on Saturday.

Four of the six drivers in Mini Swift had the day off, qualifying directly into the Saturday’s events. Canadian Ian Qiu had the best opportunity of the two in the Final B race to battle for the win, starting fifth. Qiu was up to second in the closing laps, however, trailed the leader by over three-seconds. In a flurry last couple of circuits, Ian was in a dog-fight and ended up third in the final results. Mexico driver Ivanna Richards started in 29th and was able to advance nine positions in 9-lap race. Tomorrow, the four drivers representing IAME USA all start in the top-10.

The last race of the day was the Final B for the X30 Junior division. Starting fifth was Sunshine State Karting Championship ticket winner Kyffin Simpson. The New York driver was among those battling for the victory. Simpson was able to put himself into the third position after some shuffling and run down the top two drivers. Once there, he went after the leading who ran a very aggressive defensive line. This allowed a group of drivers to close up on the final lap, with Simpson getting the short end of a three-wide run out of the opening corner, dropping from what could have been a pass for the lead into dropping back to fourth. Simpson came 0.29-seconds away from winning the race and earning the 34th starting spot in Saturday’s Prefinal. It was a valiant effort by the SKUSA Pro Tour KA100 Junior vice-champion. Looking at the points, 13 less would have put him in the show directly. Simpson only finished in the top-10 after starting on Row 3 in two of the five heats. His second best was the last one today, placing 10th. Mexico driver Ian Aguilera had his best result of the event in the final heat race, and improved 10 spots in the Final C main event.

With 135 drivers fighting for 34 spots, the X30 Senior odds are against you before you even hit the track. Edward Portz having the issues in qualifying basically put him out of contention but the Oregon driver fought on, coming just five positions short of earning a spot in the Final C event. Mexico driver Ricardo Escoto was also unable to continue on after the heat races. That left United States Pro Kart Series ticket winner Zach Hollingshead to carry the North American contingent. Starting the Final C from 17th, Zach fought to break into the top-15 the entire 14 laps. He got as high as 15th before drifting back to 18th, losing one spot because of a pushback bumper penalty.

United States Pro Kart Series champion David Galownia had his best day of the week in France results-wise. He started the Final B in 17th and was into the top-10 right away. David fought for position the entire race, and crossed the checkered flag inside the top-10 to complete his first international event. Tomorrow, Superkarts! USA champion Matt Johnson will represent Team USA in the main event, starting 20th.