The sixth and final event of the 2019 World Karting Association Bridgestone Manufacturers Cup Series took competitors to the New Castle Motorsports Park for the Top Kart Grand Nationals. The coveted WKA Eagle trophy was awarded to the 16 winners on the weekend, with the final points collected for those gunning for a WKA championship. Rain affected Friday practice with full sunshine be it with colder temperatures hitting the New Castle, Indiana area for the two days of racing. Five drivers were able to double up on the weekend in their respective classes around the ‘40’ configuration layout of NCMP. 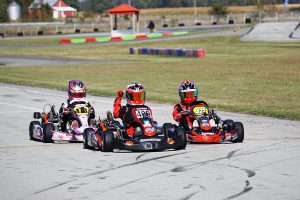 One driver was able to earn three WKA Eagle trophies on the weekend – Panama driver Sebastian Ng. Two came in the Briggs 206 Cadet class after what was a great battle all weekend by the 12 drivers entered. Fresh off a Cup Karts North America title the weekend before, Aryton Grim (Nitro Kart) set the fast time in qualifying, edging out Ng (Nitro Kart) by five thousandths of a second. Christopher McKeithan (Nitro Kart) was third, only 72 thousandths off, but came away with the wins in both heat races. After leading the opening lap, McKeithan was shuffled down to 10th. Ng took over and led the remaining 13 laps for the victory. Championship leader Spencer Conrad (Nitro Kart) came 63 thousandths short at the line from taking the win from Ng. Julian DaCosta (Haase) was third with McKeithan fighting back up to fourth ahead of Grim. Ben Maier (Nitro Kart) took control on Sunday, setting fast time in qualifying and winning the Prefinal. He led the first 13 laps of the Final until Ng took control. From there, Ng led the remaining laps to sweep the main events with Conrad off by 65 thousandths in second. Caleb Tarter (Nitro Kart) moved up to third, dropping Maier to fourth with McKeithan in fifth. When the drops were calculated, Maier secured the championship over Conrad by 35 points with McKeithan in third. 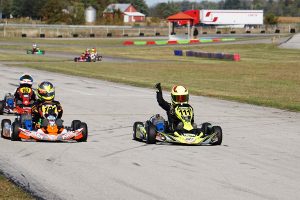 Sebastian Ng was able to complete Saturday’s round of racing with a two WKA Eagle trophies. The second came in the Mini Swift division. Ng (Nitro Kart) set fast time in qualifying and won Heat #1 before placing third in Heat #2 behind Ben Maier (Nitro Kart) and Austin Jurs (Merlin). In the Final, NG jumped out to the lead and led 13 of the 14 laps for the victory. Championship leader Adam Brickley (Nitro Kart) advanced up to second with Jurs finishing third. The same names were in the hunt on Sunday as Brickley recorded the fast time in qualifying and Ng winning the Prefinal. In total, six different lead changes took place in the 18-lap Final, with Brickley able to secure the victory with a last lap pass. He held off Jurs at the line by 24 thousandths with Maier finishing third. Brickley’s win more than locked up the championship with Maier in second and Jurs in third. 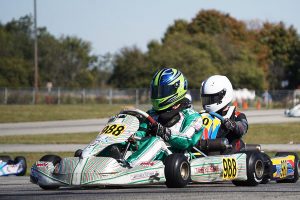 The KA100 divisions – Senior and Junior – were swept on the weekend. Sam Cate, a NCMP local driver, led the way in the KA100 Senior category both days. Cate (Tony Kart) led all sessions on Saturday and was trailing Brian Rettig (FA Kart) for the first nine laps in the Final. After taking the lead on lap 10, Cate went on to score the victory. Rettig settled for second with Andrew Patterson (Tony Kart) in third. Cate nearly went wire-to-wire on Sunday, leading 11 of the 12 laps in the Prefinal for the win before showing the way the entire Final for his second victory on the weekend. Rettig was second once again with championship contender Brad Brittin (Merlin) in third. Brittin came up short of the title, finishing second in the standings as Alexander Kardashian (Top Kart) earned the title. Nate Dean (Top Kart) ended the season in third. 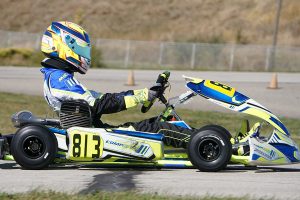 Westin Workman entered the weekend trailing Adam Maxwell in the KA100 Junior championship standings. Earning maximum points over the two rounds is all Workman could do on his end to help his title hopes. He did just that, sweeping the weekend. Workman set fast time in qualifying and won both heat races on Saturday before leading 13 of 14 laps for the main event victory. Tyler Wettengel (FA Kart) led one lap, and settled for second while Maxwell (Top Kart) won the battle for third. Workman led all day on Sunday, never relinquishing the top spot through the Qualifying, Prefinal and Final sessions for his third victory of the season. Gavin Griffin (Tony Kart) posted fast lap of the race to earn the runner-up spot in his 2019 WKA debut with Wettengel winning the fight for third over Maxwell. The results on the weekend were enough for Maxwell to earn the class championship by 40 points over Workman with Wettengel ending the season in third. 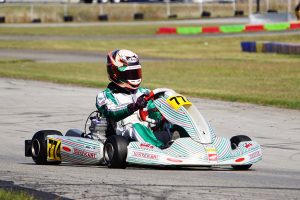 John Burke was able to double up in his 2019 WKA debut in the X30 Junior division. Qualifying on Saturday was the lone session that Burke (Tony Kart) did not finish in the P1 position. Title contender Nathan Nicholson (Tony Kart) was awarded the top spot in qualifying after Adam Maxwell (Top Kart) was penalized in the session for a pushback bumper penalty. Burke was classified second in the session, and went on to win both heat races and the main event by 13 seconds. Mateo Rubio-Luengo (Tony Kart) was second in his 2019 WKA debut with Maxwell finishing third. It wsa Rubio-Luengo that challenge Burke on Sunday. Burke set fast time in qualifying before the two fought for the win in the Prefinal. Burke came away with the win and carried that momentum to go wire-to-wire in the Final. Anderson Leonard (Tony Kart), making his Junior debut, drove to second with Danny Dyszelski (Tony Kart) in third for his debut in the category. In the title chase, Hayden Jones (Tony Kart) completed the season as series champion ahead of Nicholson and Maxwell. 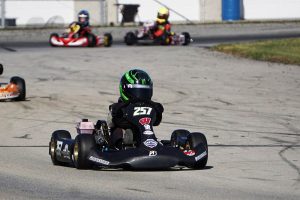 Holden Harder was able to add to his win total for the 2019 season in the Kid Kart class, winning both main events. Saturday was a sweep of the action, holding the P1 position in all the sessions. Harder was able to come away with a four-second advantage in the main event. Adam Wooldridge and Carson Benjamin stood on the podium with Calvin Quinn and point leader Jacob Schaible completing the top-five. Benjamin broke up the perfect score for Harder, earning fast time in qualifying on Sunday while Wooldridge won the Prefinal. It was Wooldridge that took the checkered flag in the Final, however, he was removed from the results after tech. That promoted Harder to the top spot of the podium. AJ Stoner had his best finish of 2019 in second with Colton McQuade in third. Schaible was classified fourth with Jordon Pulchlopek in fifth. Harder’s victories also gave him the series championship, with Schaible back by 30 points and McQuade in third. 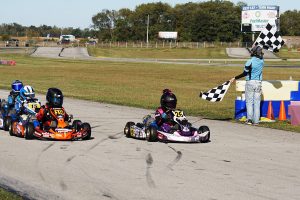 Two drivers split the win in the Micro Swift category, with one earning her first and another adding to the season total. Championship contenders Hoyt Mohr and Spencer Conrad set the tone for much of the day with Mohr (Nitro Kart) the top qualifier and Conrad (Nitro Kart) winning both heat races. Conrad led the majority of the main event with the closing laps a mad dash for the top spot. Ava Hanssen (Merlin) took the lead from Conrad and fell back to third at the white flag before knifing her way to the checkered flag first to earn her first of the season. Christopher McKeithan (Nitro Kart) came two hundredths short with Austin Olds (Top Kart) joining them on the podium. Conrad ended up fourth with Caleb Tarter (Nitro Kart) in fifth. Hanssen carried that momentum over to Sunday to begin as the top qualifier. She came 49 thousandths short of the Prefinal win with Ayden Patty (Nitro Kart) earning the top spot. Conrad stepped up in the Final, moving into the lead on lap two and holding the position the remainder of the race. Olds was on his bumper the entire time, coming up just six hundredths short at the line. Levi Copass (CRG) gained his first podium finish of the season in third ahead of Tarter and Hanssen. Conrad earned five victories on the season to claim the championship. Mohr finished second with Olds ending the season in third. 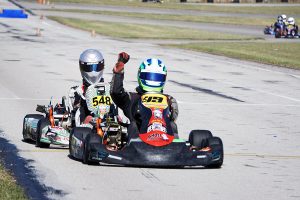 Andrew Patterson (back) and Evan McCorquadale each won a main event in the Briggs 206 Senior class (Photo: Alissa Grim)

A Briggs 206 Senior local option class was added to the schedule and boosted 19 entries to be the largest division of the weekend. The main events were split by Andrew Patterson and Evan McCorquadale. Patterson was able to score the victory on Saturday, beating top qualifier Cayden Young to the line. Heat #1 winner Mason Piper drove to third with Jacob Smith and McCorquadale completing the top-five. Patterson came up short on Sunday, as McCorquadale drove to the victory in the 18-lap main event. Keegan Clark joined them on the podium in third while Young and Piper finished fourth and fifth.

The WKA Manufacturers Cup Series closes out the 2019 season and now looks toward the 2020 season with a new schedule structure, new weekend formats and new classes bringing on a new era for the tenured program. The new period begins at the annual Daytona KartWeek at the Daytona International Speedway in Florida, with the 45th anniversary of the inaugural event inside ‘The World Center of Racing’.