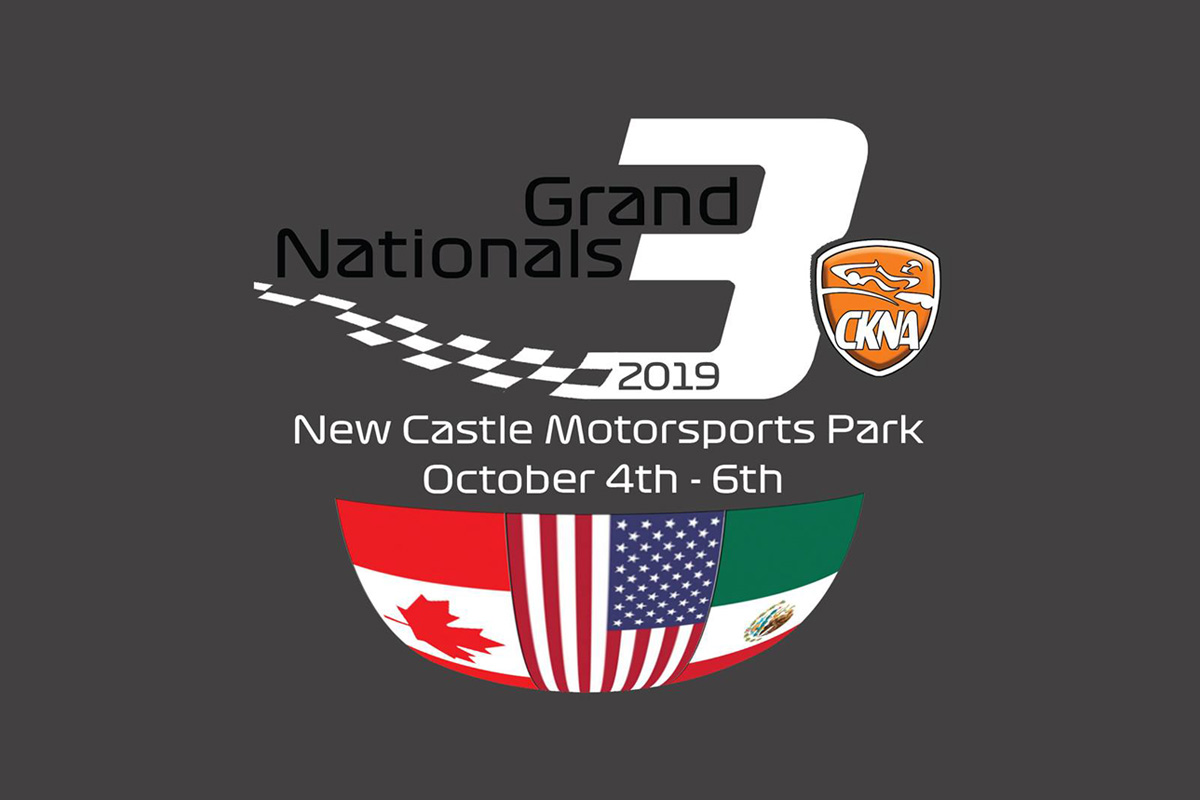 Those who were trackside for the Cup Karts North America Grand Nationals 3 at New Castle Motorsports Park this past weekend can say they were there as a part of history. The sport’s ‘Operation Grassroots’ movement has been in full force since the Briggs & Stratton 206 engine made its debut, and this year’s event was mostly definitely the pinnacle of this incredible wave of growth and excitement. The CKNA program is based out of Minnesota and it has been the catalyst for growing regional racing in the Great Lakes area, and over the past three years, they have provided a ‘Runoffs’ style event to bring together Briggs 206 racers from all over North America. The event came up just short of the monumental 200-entry mark last year, but the 2019 edition eclipsed that target by a long-shot, enjoying entries 281 spread out with the eight categories that were offered during the October 4-6 event in New Castle, Indiana. 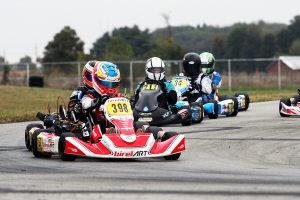 Canadian Jordan Prior came out of the great battle in CIK Medium as the victor (Photo: EKN)

The category that everyone was watching throughout the weekend was the CIK Medium division, which drew a stellar 71 entries. The large attendance forced the need for a different race weekend format for this class, featuring the heat race flight format in which the class was broken up into four groups who then racing against each other once. The points gained from the results in those heat races would set the lineup for the main event. Lap times set records for the event, especially in CIK Medium, where the quick lap in qualifying was six tenths faster than the previous year. One driver dipped below the 1:13 mark, as Canadian Jordan Prior (Birel ART) set the quick time with a 1:12.966 lap, edging out Florida driver Corey Towles (Eagle) by 38 thousandth. 2018 winner Gary Lawson (Eagle) was sixth in the order, off by three tenths of a second.

The opening four heat races welcomed four different winners on Saturday. Lawson kicked it off with a win in A-vs-B before Garrett Adams (Eagle) won the C-vs-D run. Prior retained the top spot in A-vs-C, while Towles took the win in B-vs-D. Rain hit the area on Sunday morning pushing the third round of heats into wet conditions. Prior drove to the win in A-vs-D, while Lawson ran away in B-vs-C to notch his second win as well. These strong results put Prior and Lawson on the front row for the 14-lap main event.

The lead position was rarely held for more than two laps during an exciting 14-lap Final. Lawson took his turn at the point as Prior was shuffled down the order lap after lap, eventually hitting the seventh position. The lead group included a number of different drivers early on, and then Lawson and Alexander Kardashian (TopKart) appeared to have a break away in progress until Californian David Vasquez (VLR) led a train of karts back to the two leaders. Vasquez took the lead once he arrived on the scene, but Kardashian wanted the top spot more, taking the position for two laps before Towles grabbed the point for the first time since lap three. 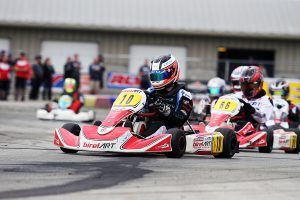 The two laps to go signal was displayed as the lead pack was now 11 drivers, with another pack trailing behind them ever so closely. Kardashian made his move at turn five, with Towles holding the outside line through the corner. That allowed Lawson to dip inside for second through the double right-hand corners, and he then dove inside of Towles at the ‘Cell Tower’ hairpin. Towles attempted to run the outside line and drove off track, dropping down the lead group. All of this shuffling put Prior on the bumper of Lawson with Vasquez into third as they took the white flag. Prior moved at turn five, taking over the lead, bringing Vasquez into second through the double right handers. Lawson fought back on Vasquez, allowing Prior to gap them and the rest of the lead pack. At the line, Prior took the victory by four tenths of a second ahead of Vasquez and Lawson. The lead pack shuffled up in the final corners, with Canada putting three in the top-five as Jon Treadwell (Birel ART) and Curtis Fox (Birel ART) moved fourth to take fourth and fifth.

Earlier in the day, Fox cashed in for the CIK Heavy main event to start his day on a high note. Fox was among the contenders entering the main event, yet up front it was two-time heat winner Sean Meier (Coyote) leading the way. Meier won Heat #2 and Heat #3 to claim the pole position for the Final after top qualifier and Heat #1 victor Jordan Prior (Birel ART) had issues in his second heat. Meier jumped out to the lead and showed the way in the opening three laps. Contact with Owyn Thomas (Birel ART) on lap four dropped Meier off the track and down the order, eventually finishing 22nd with Thomas receiving a penalty after the race. Jon Treadwell (Birel ART) took the point for two laps before Fox assumed the position. Fox led the remaining five circuits to claim the victory. Treadwell came across the line in second, but was penalized for contact to drop him down to 18th. Evan Stamer (Margay) started outside the top-15, and knifed his way to the second spot ahead of Blake Korth (Birel ART). Jordan Bernloehr (MGM) was fourth with Prior climbing up to fifth. 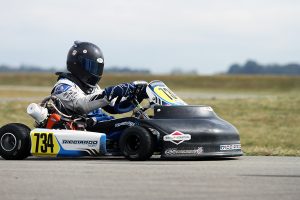 Marc Stehle drove away to the victory in Senior Medium (Photo: EKN)

The rain ended as the opening main event closed, yet the third Final in the order – Senior Medium – was still forced to go out on Vega wet tires. Marc Stehle (Ricciardo) shined as the sun broke through the clouds and dried the track out. Stehle started third and took over the lead on lap two. From there, he pulled out to a staggering 18-second advantage through the 12 laps to claim the dominant victory. Brian Rettig (FA Kart) was able to come forward late, stealing the second spot away from Kardashian (Eagle) and Eric Fagan (Ricciardo). Michael Miller completed the top-five. 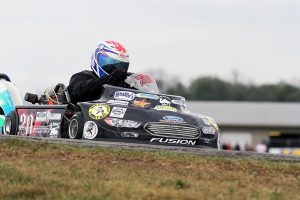 A great second half of the race earned Justin Wishard the win in Senior Heavy (Photo: EKN)

The Senior Heavy division was much more of a fight later in the day with a dry track and dry Vega tires. Connor Lund (MGM) was the top contender, coming into the main event with fast time in qualifying and winning Heat #1 and Heat #3. From the pole position, Lund led the opening nine laps with four drivers on his bumper. Last year’s winner Grant Zimmermann (Arrow) took over the lead with two laps remaining. Charging forward with fast laps of the race was Justin Wishard (Arrow). The Heat #2 winner put on the pressure through the final lap. He missed at turn four, and missed through the double right-handers. Wishard finally made it work through the kink corners after the hairpin and held on through the final corners for the victory. Zimmermann drove to second with Elmer Edmonson (MGM) jumping up to third ahead of Lund. Former Grand Nationals winner Michael Welsh (MGM) was fifth. 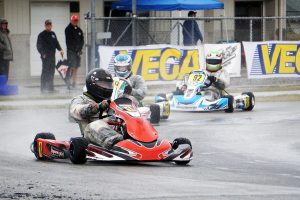 Nick Tucker was magic in the rain, scoring the win in CIK Masters (Photo: Alissa Grim)

The lone main event in full wet weather conditions was the opening Final, featuring the CIK Masters class. Only 25 of the 41 drivers started the main event, excluding pole sitter Steven Kilsdonk (MGM). The driver who scored all three heat race wins stood on the sidelines to watch, along with a number other top-15 starters in the field. The front row was then Chris Cline (Ionic Edge) and Steven MacVoy (Ricciardo). Each led a lap before Nick Tucker (Nitro Kart) took control. Tucker was fast in the wet conditions, as was Canadian National Champion Eli Yanko (Tony Kart). The two pulled away and while Yanko had fast laps of the race, he was not able to work around Tucker for the lead. Tucker took the victory, having come back from engine issues in the opening heat race. In post-race inspection, Yanko had his second place removed after failing carb tech. That promoted Margay driver Ken Williams to the runner-up spot after he won his battle against Adrian Donkers (Tony Kart). Matt Skaggs (Ionic Edge) and top qualifier Jamie Macarthur (K&K) completed the top-five. 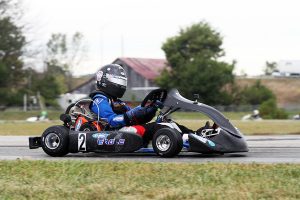 Logan Adams is the provisional Junior winner until the official results are confirmed (Photo: EKN)

There was no clear-cut favorite in the Junior category all weekend. Carter Pryor opened the event as the top qualifier while Elijah Skaggs, Cayden Fretwell and Nicholas Gilkes all won a heat race in the 43-driver field. A few rain drops fell on the track as the field took the green flag for their final, making the track slippery through the opening few laps. A number of drivers spun during that time. The race unfolded with Logan Adams (Eagle) as the provisional winner, although the official results have not yet released. 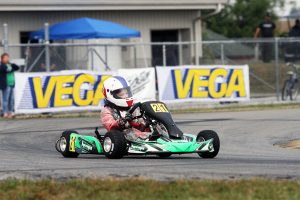 Aryton Grim drove away to the Sportsman division win, his second at the event in three years (Photo: EKN)

The wet weather conditions were a factor in the main event for Sportsman as well. The rain had stopped, however, the track was still wet for the second Final on the day. Blake Boon, who won all three heat races, led the field to the green flag. The young drivers navigated the track for the first time all weekend on wet Vega tires, some with success and some just trying to hang on. Boon led the opening circuit with Aryton Grim (Nitro Kart) on his bumper. Boon had an issue on lap two, and fell to the tail of the field. Grim took advantage and never put a wheel wrong, leading the remaining 11 laps to score an 11-second victory. Elliot Cox (CRG) charged through to finish second after starting 16th. Canadians Jackson Pearsall (Birel ART) and Caleb Campbell (Birel ART) were third and fourth while Ashton Henckel (Birel ART) took fifth. 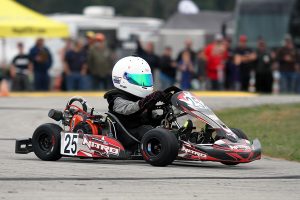 The Kid Kart category was fun to watch all weekend and, in the main event, Texan Sawyer Chambers (Nitro Kart) claimed the victory. Canadian Rocco Simone (Intrepid) held off Audrina Rowe for the second spot with Alex Haese and Jay Boon (Coyote) completing the top-five.

In total, the CKNA handed out amazing trophies and over $30,000 in prizes and raffles throughout the weekend. Plans are already underway for the Cup Karts North America Grand Nationals 4. The goal moving forward is to hit the 300-entry mark in 2020, and continue to spread and fuel the fun atmosphere of racing the Briggs & Stratton 206 community.