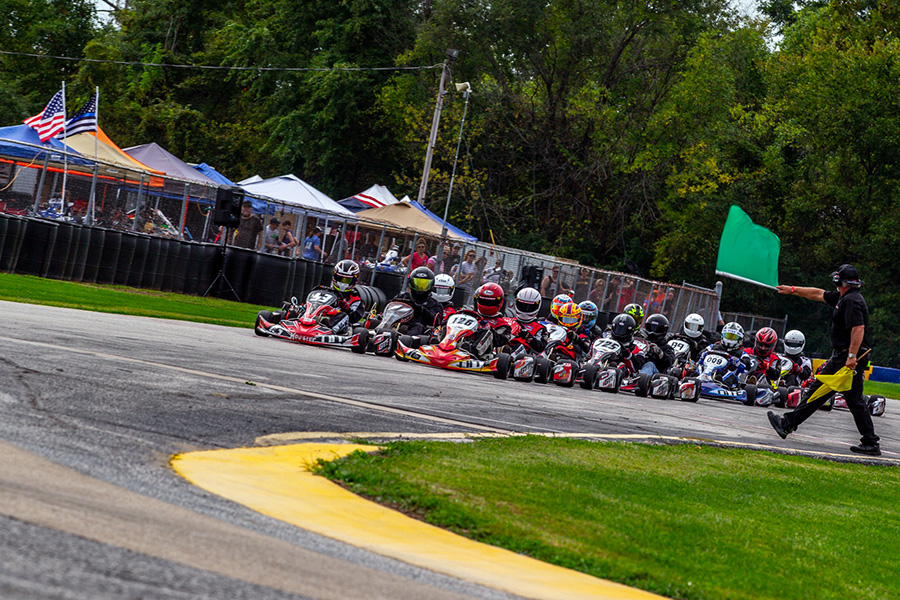 The Ignite Challenge Series returned to competition at the historic TNT Kartways in Quincy, IL. Noted in the driver meeting, track owner Terry Trader, announced that the circuit will receive a repave for the 2020 season along with a return of the Ignite Challenge Series. The current aging track surface mixed with concrete and asphalt provided tricky conditions for the drivers throughout the day. A big appreciation goes out to the Miles family and their flagging team for officiating and organizing such a great event.

The championship battle between Lane Mayer and Isaac Wells heated up in Quincy. It was a must-win situation for Wells. Starting the day with a fast time in qualifying, Wells would lead the field in the early portion of the first feature. Mayer would trail Wells by just over a second. After an earlier incident, Wells approached lapped traffic in the later portion of the event. Struggling to get by, Mayer took advantage of the opportunity and captured the lead with two laps to go. Mayer would take the first feature win but Wells fast lap would put him on pole for the second feature.

Mayer would match the pace of Wells in the second feature which allowed them to trade the lead multiple times. Giving each other plenty of room, the two drivers displayed excellent race-craft through the race. At the end, it was Isaac Wells who would win the battle and take home his second Ignite Challenge victory of the season. Louis Palmisano would win the “best of the rest” battle and take home two third-place finishes. 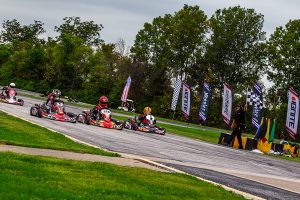 Points leader, Reid Sweeney, would continue his dominance by taking home two race victories. Kayla Carlson made an impressive return to competition after a significant injury at the Rock Island Grand Prix four weeks prior, injuries bad enough resulting in her being airlifted to the hospital. After weeks of rehab, she was able to take home two second place finishes at the historic Quincy track. Mitch Graybeal would cap the podium in both events.

Home-town hero, Justin Vancil, was the star of the Ignite Senior field all day. Starting off with pole-position, he would lead the first feature flag-to-flag. Hunter Richardson who was on Vancil’s tail, was overtaken with two to go by both Evan Stamer and Jonathan Strohm. Stamer’s pass would bump him up to first place in the championship standings over Richardson.

In the second feature, Hunter Richardson would take the early lead of the race on the first lap. Vancil would follow closely, putting pressure on Richardson. On lap 10, Vancil made the inside move on Richardson heading into the “Monza”. Both drivers holding it two-wide through the corner would allow third place, Evan Stamer, to get a massive run going down the front-stretch. Stamer would use his momentum and make the pass on the inside going into turn one. Stamer would hold on and take the second feature win. Vancil and Strohm would latch onto Stamer’s tail to get around Richardson and cap the podium. 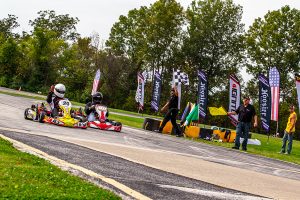 After a hiatus from karting, Jon Strohm would hustle his kart around the track and take the pole position for the first feature. After starting on the outside-pole, Ken Williams would tag along to Strohm’s bumper the whole race, setting himself up for the end. As the two drivers worked together, they would attempt to gap the field to decide the race on the final lap. It would be unsuccessful as Ryan Whicker, Mike Long and Brandin Moore would stay with the lead pack. Williams would time his pass on the front-stretch while taking the white flag. The two drivers would hold it side-by-side until they went through turn-two. Both drivers would collide and become unsettled mid-corner. Whicker was right there to take advantage of the mistake and hold off the pack to take the victory. Ken Williams would cross the line in second and Jon Strohm in third.

In the second feature, Ken Williams would start on pole after setting the fast lap in the first feature. Strohm would quickly take the lead on lap two and never look back. Strohm would take his first Ignite Challenge victory of the year with Ken Williams and Ryan Whicker completing the podium.

In the first Ignite Heavy feature, Doug Stroud would capture his first ever Ignite Challenge victory after the unofficial leader. Craig Loddeke and Bryan Strackeljahn completed the podium. In the second feature, Tucker Cory would win the race-long battle with Loddeke and earn his first Ignite Challenge win of the year. Josh Holt would complete the podium of the second feature.