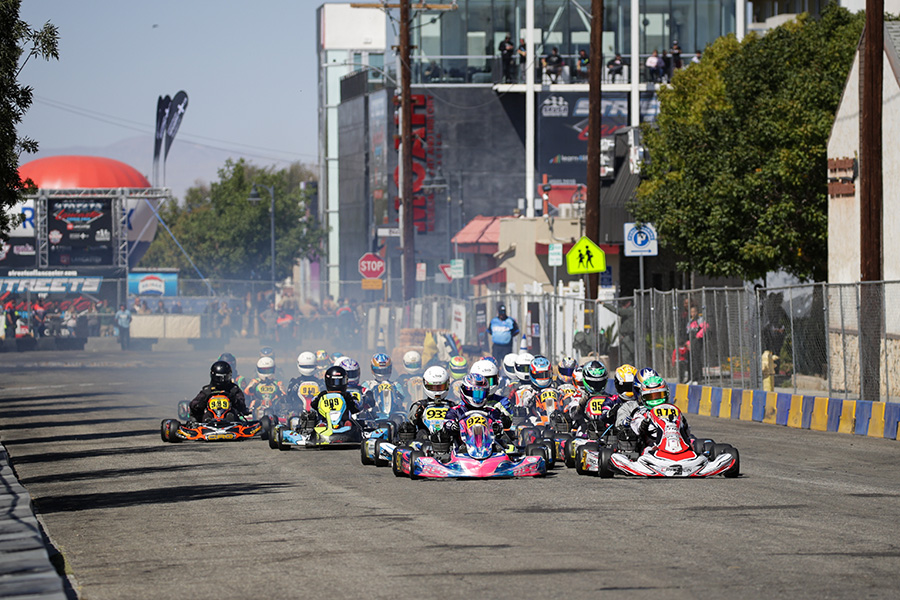 As they have for the past many years, Superkarts! USA put a cap on their flagship California ProKart Challenge season at the Streets of Lancaster Grand Prix this past weekend.  The straight-forward yet challenging five-turn layout has always provided exciting racing, and the Lancaster community comes out each year to support the event and cheer on the drivers.  The festival atmosphere is always buzzing on Saturday night, with a concert, a car show and countless food vendors. On track, Croc Promotions USA’s Jake French made his second trip to Lancaster a victorious one, as the Texan outgunned his teammate and defending race winner Billy Musgrave for the victory in the Pro Shifter class, while Connor Robles scored the biggest win of his young career, celebrating a Pro Shifter 2 triumph.  In X30 Senior, four-time defending SKUSA Pro Tour champion Ryan Norberg of Rolison Performance Group topped the field in his SOLGP debut, while Oliver Calvo came out on top of the KA100 Senior class, which was the largest of the event at 28 entries. 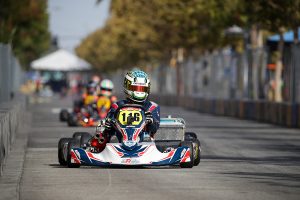 The Pro Shifter categories run through their full schedule on Saturday in Lancaster, beginning the day with qualifying before running their Prefinal to set the grid for the main event, which is scheduled in between the Lancaster VIP Boulevard Championship races under the lights.  With packed grandstands and fence lines, and an incredible atmosphere, all the IAME SSE 175cc shifter drivers took the track in a single race group at 8:45 pm.  The Croc Promotions USA teammates pulled away to make it a two-driver battle, as they fought it out for the race win with French coming out on top after making a pass in the turn 4 hairpin. Musgrave chased him all the way to the checkered flag to put a bow on the 1-2 finish. Robert Heck Jr. (CRG) completed the podium in third. Robles (Croc Promotion) emerged from a race-long scrap with Micah Hendricks (Croc Promotion) and Emon Fazlollahi (Aluminos) to bag the Pro Shifter 2 class honors. The G1 and G2 wins went to Carl Lewis (Croc Promotion) and Patrick O’Neill (CRG), respectively.

The Rolison Performance Group X30 Senior main event was run as part of the nine-race line-up for Sunday in Lancaster and the opening laps were spectacular as the drivers sliced and diced with different leaders.  Norberg started on the pole after his Prefinal win, and after dropping off the point for a lap, the Rolison Performance Group driver quickly came to the decision that the lead was the place to be. The race was eventually thinned out to a three-driver battle up front as Nick Ramirez (Ricciardo) and Matt Johnson (FA Kart) teamed up to chase down Norberg.  They pushed hard but, after 20 hard-fought laps, Norberg had stretched out an insurmountable advantage that ended up being just 0.429 seconds at the line as the winner let off to cruise underneath the twin checkers of SKUSA National Flagman Aaron Likens. Ramirez finished second ahead of Johnson, who in spite of scoring the SKUSA Pro Tour X30 Master title this year, decided to battle the young guns in Lancaster.  Jake Drew (CompKart) turned in one of the drives of the day, powering from the tail of the field to take fourth ahead of Bijoy Garg (Exprit). 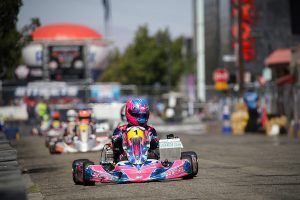 One of the most dominant drivers over the weekend was Ryan Perry Motorsports’ Max Opalski (Tony Kart), who swept the action in both the X30 Junior and KA100 Junior action.  In the Nash Motorsportz X30 Senior main, Opalski ran quick and consistent laps to pull away early, eventually winning by almost seven seconds as he left an entertaining battle behind him for the final step on the podium.  The fight for second came down to the final lap between Blake Nash (FA Kart) and Alexander Berg (Tony Kart), which ended with Berg making light contact with the barriers on the exit of the corner in the hairpin, thwarting his podium bid. This allowed Nash to run down the long straightaway unchallenged to second. Caleb Shrader (Kosmic) came through to finish third in the final tally.

Opalski continued his breakout weekend in the Allen Berg Racing School KA100 Junior class, building up a 10+ second advantage by the end of the 20-lap race.  Behind Opalski, a number of different drivers asserted themselves over the course of the race. Ethan Lampe (Birel ART) and Logan Toke (Ricciardo) looked poised for a podium finish for a time, but they slipped to fifth and sixth, respectively, behind Hallie Schroeder (Tony Kart). Fullerton drivers Kryiakos Sioukas and Jacob Yesnick emerged from the dice to fight for the runner-up position and, in the end, it was Sioukas who took the spot. 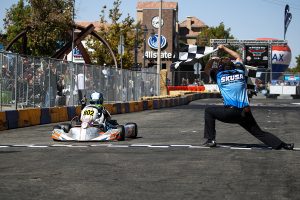 The Doran Motorsports Group KA100 Senior class was the largest of the weekend at 28 drivers, and the race up front was as good as we had expected.  Seven drivers placed themselves in the lead pack for the 20-lap scrap early on but the run for the checker would come down to Oliver Calvo (Parolin), Luke Selliken (Kosmic), Jensen Altzman (Exprit) and Alex Siragusa (CompKart). Calvo led the final run down the long 1000’ straightaway to left-hand 90-degree turn five, and as he ran the inside line to defend his position, Selliken made an aggressive move to the outside. On the exit of the corner, Selliken had almost cleared the leader, but Calvo’s shallow entry sent him wide on exit, getting into the side of Selliken enough to eliminate his chance of making the corner.  After running out of racing room, Selliken made hard contact with the barriers, which allowed Calvo to clear the incident to take the win.  Race officials deemed the contact a racing incident. Altzman and Siragusa avoided the carnage to finish second and third.

CalSpeed Karting GM Mike Smith (FA Kart) came to play in Lancaster and he dominated the action all weekend in the KA100 Master class, walking away to a 13.340-second win on Sunday over a hard-fought battle between Nick De Graaf (MMK) and PP Mastro (Tony Kart). A last-lap incident in the turn 4 hairpin shook up the podium, as De Graaf was shuffled back to fourth.  Mastro held on for second, while Robert Perez (Fullerton) was rewarded for his non-stop chase of the duo, slipping through to take the final step of the podium in third. 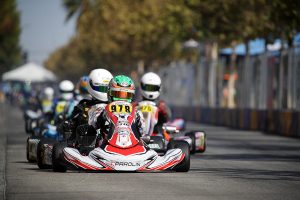 In the combined X30 Master and Super Master race group, Lancaster’s own Nick de Graaf (MMK) scored an emotional win in the Empire Karts X30 Masters final. De Graaf had to hold off Billy Cleavelin (Kosmic) for the victory, as the veteran may have waited one lap too late to make his move.  After he rolled under the twin checkers, de Graaf pumped his fist and celebrated for the entire cooldown lap before jumping into the bed of the Toyota of Lancaster Tundra pace truck to meet EKN’s Rob Howden in turn five for the post-race interviews, as did all the winners.  Cleavelin tried to drag-race de Graaf to the stripe but came up just 0.070 seconds short.  Brett Harrelson (FA Kart) was quick all race and was just over a second back to finish third.  In the AIM Sports X30 Super Master group, Jon Persing (FA Kart) held off the race long pressure from Stu Hayner (Birel ART) to take the victory by just 1.266 seconds. Rob Brackett (MMK) completed the podium in third.

The Micro Swift and Mini Swift drivers started the main events on Sunday morning in style, turning in a pair of exciting races.  The fight for the win in Ace High Designs Mini Swift came down to Enzo Deligny (Tony Kart) and Jack Schrady (Ricciardo). Schrady laid his cards on the table in the final corner in his bid for the win, but couldn’t complete the pass of Deligny and ended up in the barriers on the exit.  Deligny was caught up as well as he could not avoid contact with Schrady’s kart, which allowed Izaac Gutierrez (Top Kart) to slide through for the win.  Gutierrez had pressured the lead duo all raced and his patience in now making a high-risk move paid off. Deligny was able to continue on for second while Keagan Kaminski (Benik) took a well-deserved third. Post-race, the crowd acknowledged Schrady’s effort with a huge round of applause. 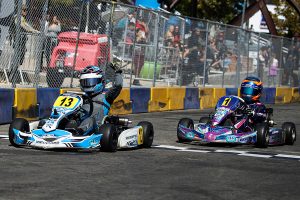 IAME USA West Micro Swift had a similar battle, but this time Logan Chambers (Riccardo) was able to come out on top unscathed after a wild final lap to score the win. A four-driver fight included Graham Trammell (Kosmic), G3 Argyros (Nitro Kart) and Alex Mercado (Parolin). Trammell was just pipped for the win to take second, while Argyros edged Mercado for third.

In the combined Stock Honda shifter race group, and late race shunt involving Vincente Salas (Aluminos) and Luca Bortone (Aluminos) opened the door for Chris Nunes (Tony Kart) to take the win over Jacop Pizzinato (Aluminos) after hounding him all race. Nunes made a late pass for the win, while Bortone was able to continue to finish third behind Pizzinato.  Mike Mantel (Aluminos) won in S4 Master Stock Honda while Mathias Coito (Croc Promotion) scored the win in the S5 Junior Stock Honda over Ansel Baldovin (Aluminos). 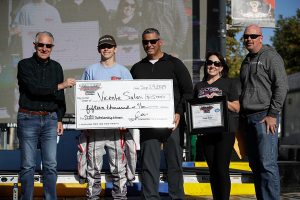 The awards presentation and closing ceremonies were held in turn 5 as SKUSA’s Tom Kutscher and City of Lancaster official and council members toasted the racers. Rumors circulated throughout the weekend that this could be the final Streets of Lancaster event, although Kutscher seemed to indicate in a playful banter with city officials on-stage that discussions may be continuing to extend their relationship into 2020.  The final announcement that has become a tradition was the naming of the Streets of Lancaster GP Scholarship winner.  This season’s selection was S3 driver Vincente Salas, who will win a prize package worth approximately $15,000, which include a new SOLGP-branded suit and helmet, and entry packages include fuel and tires for the SuperNationals, Pro Tour and the California ProKart Challenge in 2020.