Positive Outing, Some Regrets for Maranello Kart at World Championship 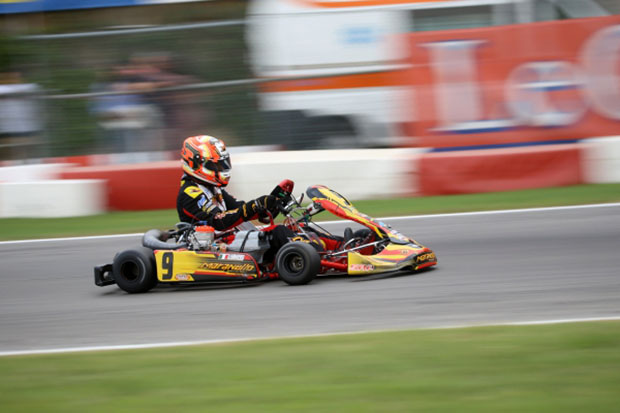 Cristoph Hold and Francesco Iacovacci raised Maranello Kart’s flag high respectively in KZ and KZ2, but there is disappointment for Fabian Federer’s retirement in KZ as for Massimo Dante and Davids Trefilovs and the other strong drivers of the Italian outfit in KZ2.

The World Championship at the South Garda Karting Circuit in Lonato has been bitter-sweet for Maranello Kart. The world event in one single round valid as KZ FIA Karting World Championship and Super Cup KZ2 was affected by some episodes that prevented the drivers of the Italian manufacturer to shine as they would have deserved. The drivers fielded by SRP Racing Team, SG Race and Oracle Racing demonstrated a good competitiveness though in the long racing weekend in Lonato.

Maranello Kart’s spearhead in the KZ World Championship Fabian Federer put in great performances among the 47 drivers contesting this category, but he was forced to retire early from the Final when focused on getting several positions back. The best result for Maranello Kart was achieved by a great Christoph Hold, who has been competitive and constant in the heats and then claimed 15th at the end of a 5-place recovery in the Final.

In Super Cup KZ2, category that had 122 drivers on track, Francesco Iacovacci obtained a good result ending 15th but was forced to recover a lot of positions in the heats as he had to qualify in the fourth group when the grip level of the track and the falling darkness were not as good as in the previous three groups.

Enrico Bernardotto could not qualify for the KZ2 final for SRP Racing Team mainly due to the retirement in one heat that badly affected his chances despite an overall good qualifying. Some issues prevented Alessio La Martina, Gabrio Bizzozero, Marco Bonfanti, Andrea Ceresoli, Sara Markucic, Raffaele De Santis and Oleksandr Deriuha from qualifying for the final. All of them have to be acknowledged for their commitment in such an important event.

Massimo Dante’s comment is quite explanatory: “This has been an amazing experience. The material was perfect, I gave my best in qualifying but it has been very tough. It is difficult to face the competition of all the rivals in this great world event. Everyone takes great care of every little detail and there is no room for error. In the first heat I took off following a contact and since then my qualifying became very difficult. In the end, I managed to get through thanks to several good placings but I had to start from the last row of the grid. This was a shame because I had a very competitive package and I was resolute to run a strong weekend but eventually a trivial gearbox issue caused my retirement from the final. Chassis and engine were perfect. This has been a happy experience nonetheless, the material was good and we were competitive both on new and used tyres. We will try again next time!”