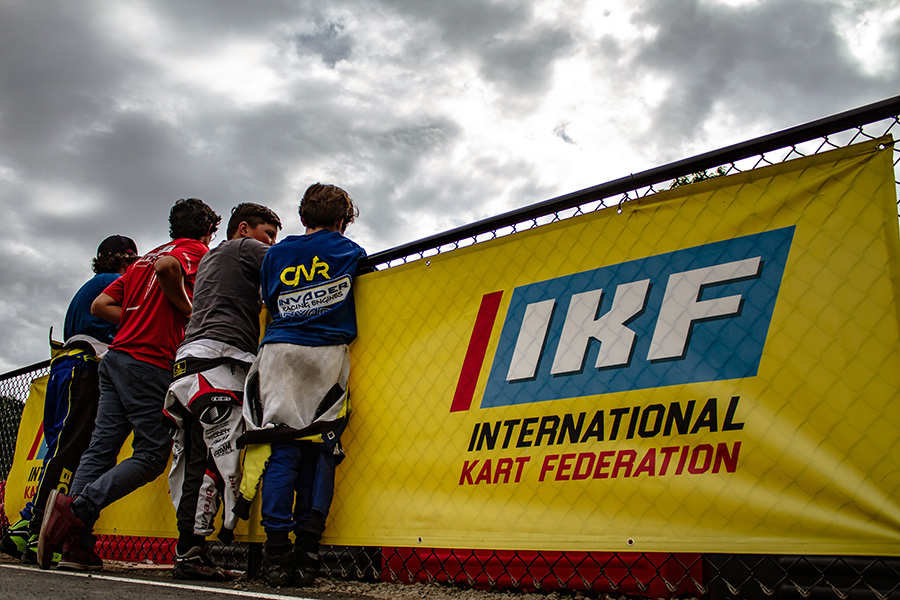 The International Kart Federation is ushering in a new era for the historic organization that spans the many decades of the sport. The pinnacle of IKF continues to be…winning the Duffy. Each season, there is only one event karters have the opportunity to claim this prestigious trophy.

The 2019 IKF Sprint GrandNationals was the chance for competitors in 2-cycle and 4-cycle asphalt divisions to do so, held at the Pat’s Acres Racing Complex on September 20-22. Weather was as expected, with the early portion of the event under dry conditions before heavy rains hit the area for the main events. Ten categories were offered on the weekend, welcoming the largest karting event held at the Canby, Oregon facility since the early 2000s on the new fresh coat of pavement to the 7/10-mile layout that was laid just days prior to the event. 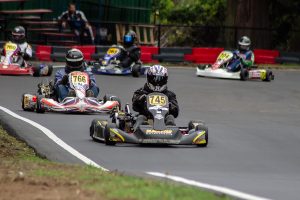 The Briggs & Stratton 206 divisions made up the majority of the entries on the weekend, with the Briggs 206 Junior class as the largest, featuring 25 drivers. Sophia Storey opened up the event with fast lap in the qualifying session to earn the IKF Screaming Eagle, posting a 52.157-lap. The top seven sat within 85 thousandths after the session completed. Storey led the first 23 laps of the event, winning the opening heat race and missing out on the second win by one lap. Zach Franzke took led the final circuit of Heat #2 to claim the win. Heat #3 is when Josh Pierson took control. Pierson advanced from 12th on the grid to the lead by lap four, and drove away to a 2.7-second advantage over Storey. In the rain, Pierson dominated the 19-lap main event to earn his first career Duffy. The advantage was 22 seconds at the checkered flag with Jack Doyle winning a great battle over Boden Barnwell, Caleb Shrader and Owen Rule. 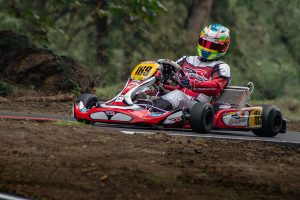 The World Formula engine package from Briggs & Stratton has been part of the IKF GrandNationals for many years, and remains a popular category in the Pacific Northwest. The World Formula Masters class was the lone category featuring the engine package, with 11 drivers battling for the Duffy. The entire event was the ‘BG’ show – between Burt Gasaway and Bryan Green. Gasawy set the mark in qualifying, laying down a 52.127-lap to clear the field by half a second. He led the entire Heat #1, only to receive a three-second penalty to hand Green the win and drop Gasaway to third in the order. Gasaway took the top spot away after two laps in Heat #2, leading the remaining 10 circuits for the win before going wire-to-wire in Heat #3. Green stayed close and remained on his bumper until lap 11 of the Final. He and Gasaway began shuffling for the lead until Green secured the spot on lap 13. From there, Green led the final laps to secure the Duffy. Adam Ansteth slipped past Gasaway for second in the closing laps with Jerrod Sessler and Tim McKinney completing the top-five. 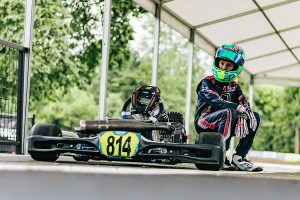 A late addition to the class lineup at the event was Shifters and 12 drivers jumped at the opportunity to grab a Duffy. The field did not lack talent, with newly crowned SKUSA Pro Tour champion Kyle Wick on hand. Wick set fast time in qualifying with a 44.863-lap, edging out 2010 SKUSA Pro Tour champion Joey Wimsett by 31 thousandths. Wick was able to fend off Wimsett for the win in Heat #1. Wimsett grabbed the holeshot and led all 12 laps in Heat #2. Wick came back to fight in Heat #3, however, Wimsett grabbed the win on the final circuit. In the rain for the Final, Wimsett mastered the wet surface to lead all 21 laps to a 2.4-second advantage over Wick. Cameron Egger completed the podium in third with Dan Monteiro in fourth and Rusty Lingle in fifth. 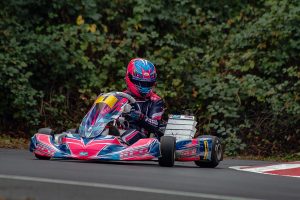 Josh Pierson was able to add a second Duffy to his first, dominating the event in the KA100 Junior category. Pierson led from start to finish, ending each session in the P1 position. His 48.600-lap gave him the Screaming Eagle in qualifying, and then led all 36 laps to win all three heat races. The rain did not even slow him down for the main event, going wire-to-wire for a 13-second advantage in his victory. Kyriakos Sloukas earned the runner-up spot ahead of Nolan Allison. Graham Trammell and Caleb Shrader completed the top-five. 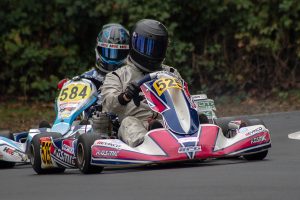 The TaG Light and TaG Heavy divisions were sweeps as well. Four-time SKUSA Pro Tour champion Ryan Norberg swept the Light division to add a Duffy trophy to an already impressive trophy case. Norberg edged out Kellen Ritter in the main event for the victory on track, with Ritter disqualified for too wide the rear width in tech. The overall winner in the combined race group in the main event was Mike Rolison, winner of the Heavy division. Rolison swept the event in the category, and outran the younger Norberg by five-seconds in the Final. The Duffy was the fourth of his career, winning three at one event 19 years ago. Former SKUSA Pro Tour champion Scott Falcone was second with Craig Collins third. 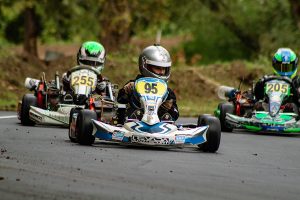 It was a near sweep in the Briggs 206 Cadet division as Jack Schrady took home the Duffy. Greyson Shobert took home the Screaming Eagle for fast time in qualifying with a 53.320-lap. Schrady was third in the session, only 91 thousandths back with Cooper Perez in second. Shobert and Schrady battled for the win in the opening heat, as Schrady took the win by 28 thousandths at the line. Shobert continued to fight for the top spot in Heat #2 until he retired on lap 11 and Schrady won the comfortably. Schrady led all 12 laps in Heat #3 and then navigated the rain to perfection for a wire-to-wire victory in the Final. Shobert drove from ninth to third in the final heat race and ran second the entire main event, crossing the line four seconds back of Schrady. Preston Franzke joined them on the podium in third with Perez in fourth and Jonathan Endrizzi Jr. fifth. 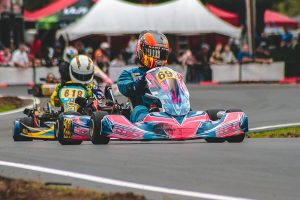 The second largest class of the event, and likely the most competitive, was Briggs 206 Senior. The 22 drivers took to the PARC circuit in search of taking home the Duffy, that in the end, stayed in Canby. Tyler Besuyen was the Screaming Eagle winner, setting fast lap in qualifying with a 52.799. Tyler Agan was only three thousandths off with Cole Nelson short by nine hundredths. Nelson struck first in the heat races, jumping up to the lead by lap three and leading the remainder of the race. Leading all 12 laps, Nelson came across the line as the winner in Heat #2, but a jump start penalty dropped him to second to give Agan the win. Agan won the third heat on track, working past Nelson for the win on the final circuit, edging him out at the line by 67 thousandths. The rain did not go in favor of Agan, who led one lap before he began dropping down the order in the Final. Brady Egger, Hunter Kelly and a host of others joined Nelson at the front of the field. Kelly led the majority of the laps until the final circuit. Nelson took the lead from Kelly with Egger slipping up to second. In the final corner, Egger dove inside of Nelson and was able to get a better run on the exit, winning the drag race the checkered flag and the Duffy. Bryce Dickman was able to slip past Kelly for the third spot with Spencer Kunz in fifth. 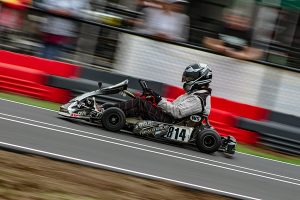 Brian Gallagher was another sweep on the weekend, scoring the Duffy in the Briggs 206 Master class. Gallagher took the Screaming Eagle in Qualifying with a 54.562-second lap. It was a near perfect performance for Gallagher. After going wire-to-wire in the first two heat races, Rusty Lingle led the opening two laps of Heat #3. Gallagher reclaimed the top spot, going on to win and then lead all 19 laps of the Final. Brian Baker and Dayn Hoel joined him on the podium with Derek Bittle fourth and Lingle ending up fifth. 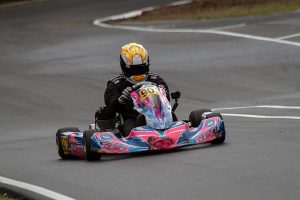 Luke Selliken did record a perfect score in the KA100 Senior class, becoming the fifth driver of the event to sweep their category. Selliken, a former SKUSA Pro Tour champion, went wire-to-wire on the day without relinquishing the top spot. His 47.702-lap was three tenths quicker than any other driver in qualifying for the Screaming Eagle trophy. After winning the three heat races, he capped off the event with a seven-second advantage in the 21-lap Final for the Duffy. Adam Smalley drove to second with Brian Boly in third. Alex Odenthal and Amanda Smalley rounded out the top-five.

In total, 10 Duffy trophies were earned on the weekend with racers needing to wait until 2020 for a chance to win their own at the IKF Sprint GrandNationals.