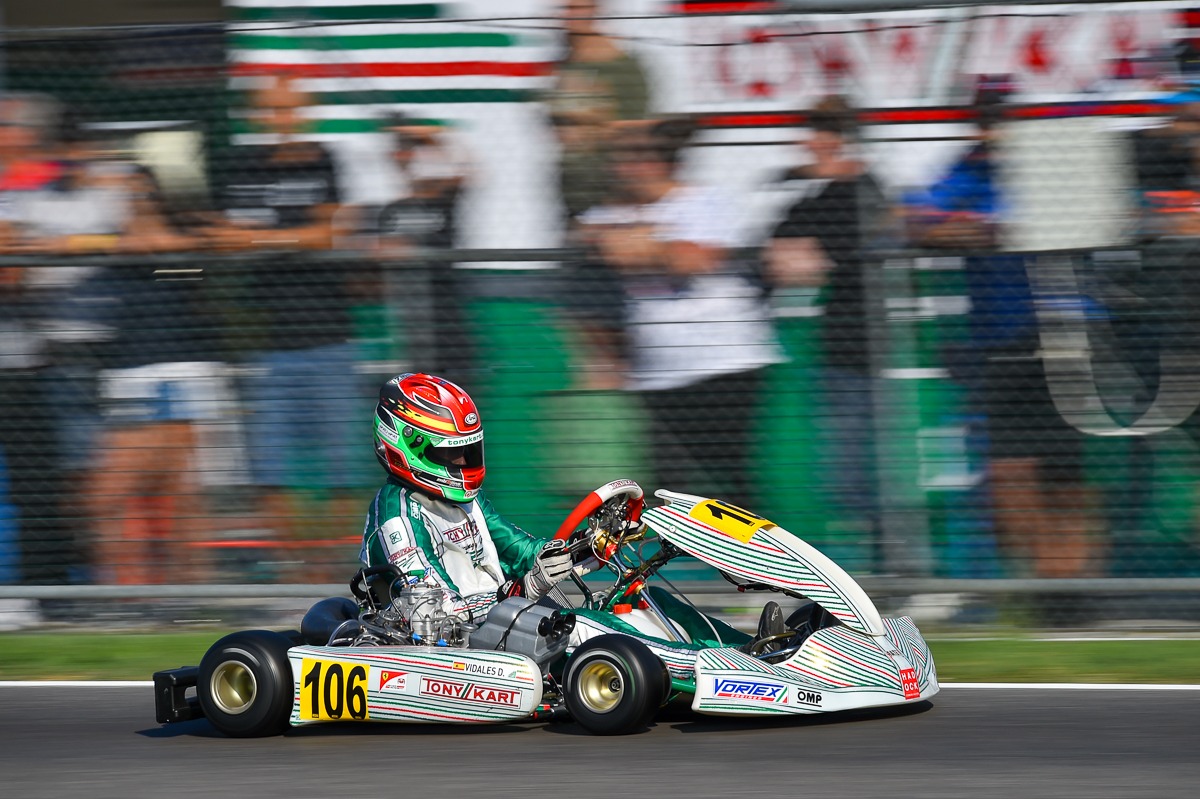 David Vidales gains the second step of the podium at the KZ2 International Super Cup on the South Garda Karting in Lonato, while Tony Kart ends in top ten in the KZ final with four drivers.

Also on the last round of the FIA Karting season, the Tony Kart Racing Team is the author of an excellent performance. On the KZ FIA Karting World Championship and KZ2 International Super Cup run in Lonato, at the South Garda Karting circuit, our drivers are constantly fighting for top positions and win a prestigious second place in KZ2.

David Vidales got it, being the author of an almost perfect weekend at the International Super Cup. Two victories, two second and a third places gained in the heats allow David to start from the third box for the most important final of the year. Here, his Tony Kart Racer 401 R powered by Vortex helps him to stand out brilliantly during the first, exciting stages of the race, characterized by a very tight battle behind the leader. Vidales manages to gain the second position with a great overtaking and, from that moment on, he shows off an unstoppable pace leading him to score the best lap of the race and to cross the finish line just a few meters from the winner.

The excellent result obtained by Vidales is accompanied by the great debut in a FIA race within the Tony Kart Racing Team of Danilo Albanese. The Italian immediately proves to be at his ease, both in the starts and in the fights with more experienced drivers: two victories and three second places prove it unequivocally. An unlucky withdrawal, however, forces him to a late start in the final and a race in the middle of the brawl, at the end of which he is able to improve his position.

A withdrawal in the heat compromizes also the starting position for the final of Alessio Piccini, who once again proves not to draw back when he has to recover, overtaking six opponents in the decisive race. This is a pity, since Alessio carries out an excellent weekend, gaining 2 second and two third places in the Heats, where he is often fighting for the victory.

Overall, 5 victories in the heats, 7 second and 3 third places, besides the second step of the final podium, prove once again all the competitiveness of the Tony Kart / Vortex material.

Also in KZ our standard bearers at the wheel of the Tony Kart 401 R are a constant presence in the very first positions.

Matteo Viganò beats his opponents in a Heat and, with two third places, he is third at the end of the heat. Simo Puhakka is always on the podium (two times second and once third, centering also a best lap). Also Marco Ardigò is good to always close among the first 5, improving the position obtained in the qualifying.

The overall performance is excellent in the final too, where Simo Puhakka gets very close to the podium, finishing fourth after a hard race. Also Matteo Viganò and Marco Ardigò, racing the last world champiosnhip of his career, end in top ten, close to the first, together with the other Tony Kart driven by Lorenzo Camplese.

A bit unlucky however, Noah Milell, who, in the backlines after a crash in a Heat, ruins a very competitive weekend.

The next race meeting for the Tony Kart Racing Team will be again on the South Garda Karting in Lonato: from 24th to 27th October we will be engaged in the first round of the WSK Open Cup with the 60 Mini, OK-Junior, OK and KZ2 categories.