Sodikart: World Victory in KZ2 and 3rd in KZ 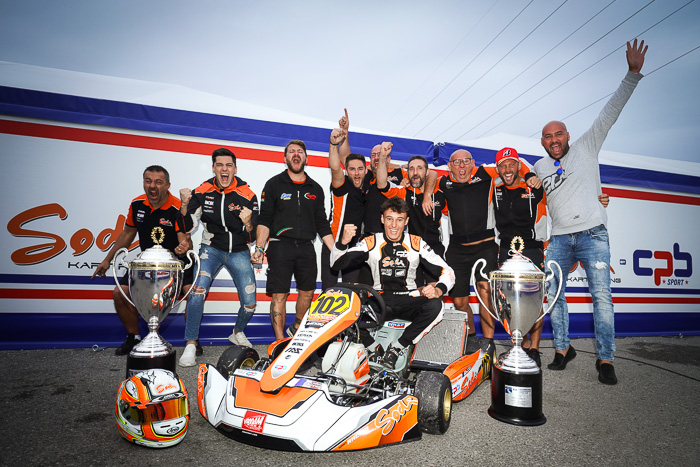 Sodikart has confirmed its place at the forefront of international racing with outstanding results in the most important event of the year. With 20 Sodi chassis entered among the 170 drivers present, Sodikart was among the main players in the world final, proof of its growing presence in international competition.

In the KZ World Championship, Adrien Renaudin constantly fought for victory, Bas Lammers mounted the 3rd step of the podium and Anthony Abbasse regained 11 places in the Final. At the same time, Emilien Denner of Team CPB Sport dominated the KZ2 International Super Cup from start to finish, while Thomas Landais, Jean Nomblot and Hubert Petit were constantly on the attack.

A year full of victories

The 2019 season proved especially successful for the Sodi chassis with eight resounding wins in the major international KZ and KZ2 races. The Sodi Racing Team drivers shone in the first races: Anthony Abbasse won the Winter Cup, Bas Lammers and Adrien Renaudin then took a superb double in the WSK Super Master Series, while Abbasse won the first European round at Wackersdorf.

A satellite team of the Sodikart factory, CPB Sport assembled many drivers and obtained great results in KZ2. Emilien Denner the Andrea Margutti Trophy to start with before being crowned European Vice Champion, without forgetting the triumphant win for Sodi in the Sarno Final with victory for Denner (CPB Sport) ahead of Paolo Besancenez (3rd in the Championship) and Jean Nomblot (CPB Sport).

KZ: Renaudin in the top rank, Lammers on the podium

The FIA Karting – KZ World Championship is undoubtedly the greatest and toughest event of the season. This year the world’s best drivers competed on the famous Lonato track, the favorite training ground for the Italian factories.  It was a dream field for a legendary race. In front of the specialists in the category, the young Adrien Renaudin was already formidable in Free Practice and confirmed this by taking pole position in Qualifying driving his Sodi / TM Racing powered by Cédric Sport Motors. He continued his exceptional progress in the heats and delivered a memorable battle in the Final. While he was in full battle for first place, a slight unfortunate collision halfway through the race kept him out of contention and he crossed the finish line in 2nd place. Unfortunately, a penalty for a spoiler dropped in the battle then relegated him to 9th.

Always among the frontrunners, Bas Lammers managed a remarkable recovery from 9th position and enlivened the Final thanks to his legendary sense of attack. He overtook multiple times and was rewarded with an extraordinary 3rd place in the world.

Anthony Abbasse was unlucky with mechanical breakdowns throughout the weekend. Already delayed in Qualifying, he had to retire in the first Qualifying Heat. He did not give up, however, and qualified for the Final before completing a heroic race with a gain of 11 places.

World crown for Denner and CPB Sport in KZ2

The FIA Karting International Super Cup – KZ2 was the most important competition of the year with more than 120 drivers from around the world. Paul Bizalion’s CPB Sport team alone accounted for 10% of the plateau. The top driver Emilien Denner displayed such a high level of performance and determination that nothing resisted him. After taking pole position, Emilien celebrated in the Qualifying Heats by winning six indisputable victories with his Sodi / TM Racing kart with engines prepared by Daldosso. He faced formidable opponents early in the Final before pulling away and controlling the race until his triumphal finish.

Jean Nomblot had started well with the 9th fastest time, but a first-round retirement caused by a faulty spark plug wire made him lose all his chances of shining. Hubert Petit managed to forget his 53rd in Timed Qualifying by qualifying 29th for the Final and then regaining another 17 places to finish 12th. Thomas Landais drove a very convincing event: 8th in Timed Qualifying, 11th at the end of the heats, he crossed the finish line in 11th place before being demoted for a unhooked spoiler.

Sodikart would like to salute the incredible work of the drivers, teams and mechanics who have worked all year to highlight the quality of the Sodi chassis. The brilliant performances of the Sodi Racing Team in KZ, as well as the CPB Sport satellite team and the private teams in KZ2 throughout the season reach a very satisfying conclusion at Lonato. The goal of the world’s largest kart manufacturer is to continue this momentum and to do even better in 2020.