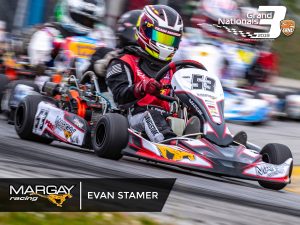 “With the growth of the series and the amount of competition involved, it was something that we could not miss out on”, exclaimed Margay Racing owner Keith Freber. “It’s currently the largest platform for Briggs 206 competition, which is by and far the most popular class in North American karting”.

Margay Racing will be competing with both their Ignite K3 and newly released 2019 Brava 206 chassis within the CIK Medium, Heavy and Masters classes.

Representing the “Fast Cats” in CIK Medium and Heavy will be Evan Stamer, Trevor Eggemeyer and Charlotte Lalonde. “The CKNA Grand Nationals is an event that I have been looking forward to all year”, stated Evan Stamer. “After spending the majority of 2018 in 100cc 2-cycle racing, I have enjoyed focusing 100% on Briggs 206 and competing against some of the best drivers in the country this season. The Grand Nationals will be the biggest challenge of my karting career and I’m excited to show everyone what the Margay Factory Team is capable of”. 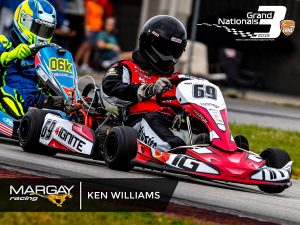 Stamer, leading the Margay Racing factory effort, is coming off two victories at the 25th annual Rock Island Grand Prix along with many other impressive showings all season. Canadian national champion, Charlotte Lalonde, a previous USAC Karting Battle at the Brickyard and WKA Manufactures Cup race winner, will make her appearance on American soil once again. Trevor Eggemeyer, last year’s Gateway Kartplex Briggs 206 Junior champion, will be making his senior debut at NCMP.

Team Margay’s CIK Masters effort will be piloted by “Pistol” Pete Vetter, Ken Williams and Brandin Moore. “Pistol” Pete, a blast from the past, has not seem to slow down with age. A 2019 Rock Island race winner in the Ignite senior division and a previous multi-time national champion is looking to make his mark at this year’s Grands. Another driver looking to make his mark in CIK Masters is Ken Williams. Williams is always fast, with a sans souci driving style and a multi-time race winner at New Castle’s KRA series. Capping the masters team is Brandin Moore. After an impressive showing and podium result at New Castle’s KRA series, Moore will be making his national racing debut this October.

Based in Saint Louis, MO, Margay Racing is the most successful sprint kart manufacturer in the United States, supporting drivers in all divisions of karting and producing winning karts for countless local, regional, and national champions. Now in its 55th year, Margay is owned by third-generation family member, Keith Freber. More information on Margay can be found at www.margay.com.