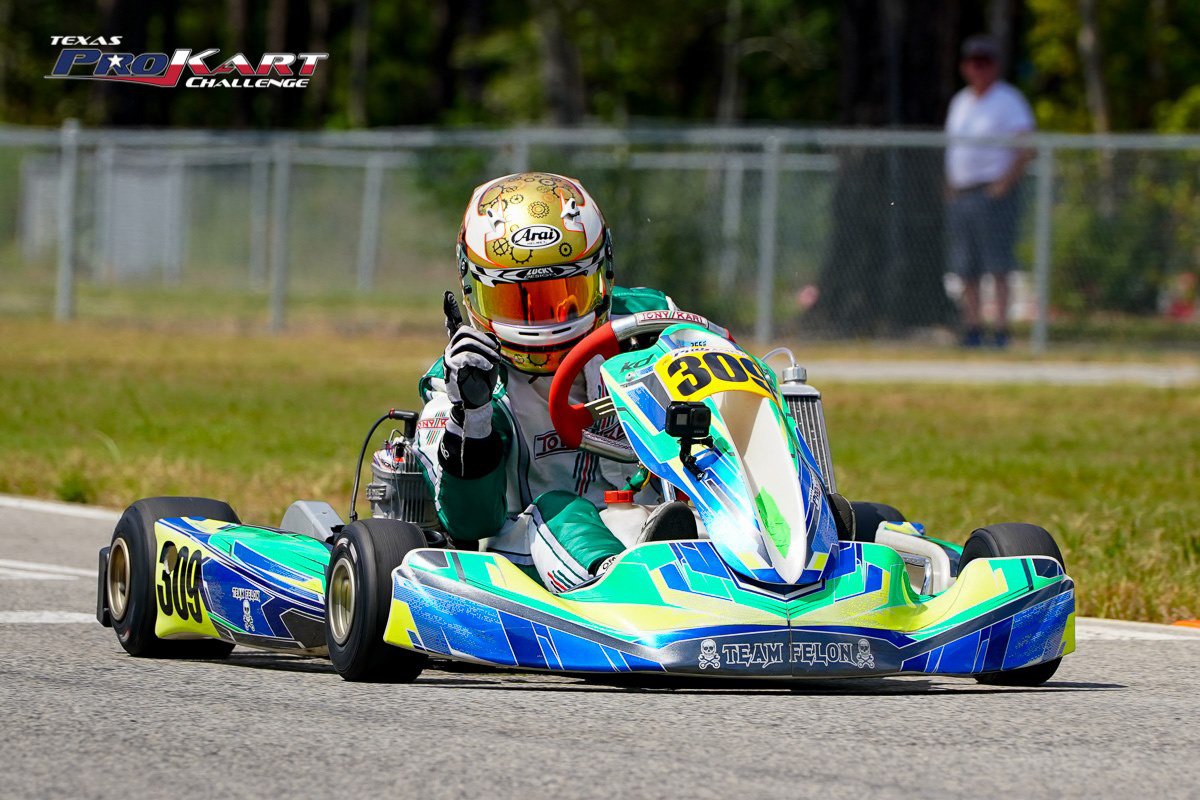 The Texas Pro Kart Challenge wrapped its 2019 season this past weekend at the crown jewel of Texas karting, Speedsportz Racing Park in New Caney, Texas. The weather was unsurprisingly warm with the mercury holding steady in the mid-90s all weekend, but a light breeze helped make the high temps bearable.  With the championships on the line, the racing was as aggressive as anyone could have expected, and the Sunday main events kept everyone on their feet.  Kaden Gray scored his fourth and fifth wins of the season to capture the X30 Senior title, while Alex Stanfield rose to the occasion on Saturday to grab the championship in X30 Junior with a game-changing second place finish.

Gray (Tony Kart) dominated the action all year in the X30 Senior category and he continued his performances in Houston, winning the Prefinal and the Final on Saturday after reigning series champion Brett Mitchell put his Tony Kart on the pole in his 2019 debut. Gray ran off and hid in the main event and left Mitchell and Riley Cann (Exprit) to fight with TPKC rookie and Speedsportz track series competitor Jeshua Alienell (Birel ART), who was impressive all weekend. Having moved from Junior to Senior mid-season, Alienell worked his way to second for the second half of the race, but Cann was able to get by on the final circuit to take the runner-up step on the podium. Alienell completed the podium in third ahead of Mitchell and Speedsportz driver Jack Scanlon (Birel ART).  On Sunday, Gray would again score the win to secure the series title, while Mitchell finished second with Cann in third.  Alienell and Scanlon completed the top-five. 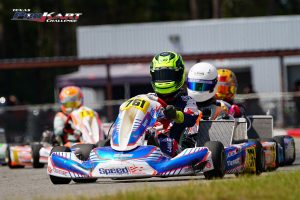 Luke Lange doubled up in his return to the TPKC, winning both X30 Junior main events (Photo: Ken Johnson – Studio52.us)

The X30 Junior category was aggressive from the opening green flag on Friday, and needed a little ‘tuning in’ from Race Director Mark French to get their heads straight. Luke Lange (Tony Kart) returned to the Texas program for the first time in 2019 and promptly qualified on pole for Saturday’s action, but Crosslink’s Ryan Shehan (Exprit) won the Prefinal. Lange came back in the main to win by almost four seconds, while Stanfield (Exprit) took matters into his own hands and made a bid for the class championship with a strong second place finish ahead of Shehan. Branyon Tiner (Kosmic) and Jack Jeffers (Tony Kart) were also making their first Texas PKC starts of the year and after being in the fight, they took fourth and fifth, respectively.  Lange continued his fine form on Sunday, again qualifying on pole before running second to Shehan in the Prefinal. In the Round 6 Final, Lange won by just over a second from Tiner and Shehan, as Shehan, Stanfield and Cruz were on fire trying to win the championship.  Shehan gave it his all in finishing third, but it was not enough to outgun Stanfield’s second place from Saturday which gave him the title by just 18 points over Cruz.  Shehan was only seven points behind Cruz in third, with 25 points covering the top-three. 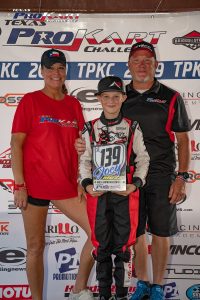 The Mini Swift action was extremely exciting with point leader Davis Cunningham going head-to-head with Joey Moss (BirelART), Cooper Shipman (FA Kart), Oscar Iliffe (Tony Kart) and Helio Meza (Fullerton). Shipman, Moss and Iliffe squared off for the win on Saturday with Shipman taking the victory, passing Moss in turn 7. Moss tried to take the spot back in turn 8 but that allowed Iliffe to slip through for second.  Moss finished third, while Meza and Cunningham capped the top-five.  On Sunday, Cunningham had trouble early in the main event but seeing as he had already locked the championship, this day would be his drop race.  Moss took the opportunity and ran with it to score a dominant win by over 4.5 seconds.  Santiago Duran (Nitro Kart) stepped into the fray on Sunday and finished a strong second ahead of Iliffe, while Landon Skinner (Exprit) was advanced to fourth after Meza received a penalty for avoidable contact.  This also moved Ashlyn Speed (Energy) into the top-five and onto the podium.  In the final championship tally, Cunningham scored the win by 95 points over Moss, who scored his best weekend points total in Houston to make it interesting.

The Micro Swift category drew its largest field of the year with 10 drivers, led by title contenders Ethan Thomason (Exprit) and James Moss (Benik), as well as Jack Iliffe (Tony Kart), who was making his one and only Texas PKC start of the year.  Iliffe worked his way to the front to outgun Moss for the win on Saturday in a thrilling final lap side-by-side battle, while Thomason finished third after having also scored the 10 bonus points for topping the qualifying session. Each point would be crucial in this championship battle. Austin Roy (Birel ART) went quickly to the lead on Sunday, but he would end up stranded on the sidelines in turn seven to begin the second lap, which handed the lead of Moss.  Coming into the main event on Sunday, Thomason and Moss were tied in the standings which meant whoever finished ahead of one another would win the title.  Moss moved to the lead after Roy’s departure, but his thoughts on the title were immediately dashed when he was forced to steer off track a lap later in turn 10 when he dropped his chain.  In his absence, Iliffe cruised to the win but he was hit with a two-position penalty for avoidable contact that advanced Thomason to the win and Fernando Hazas (Parolin) to second.  Iliffe finished third in the final results. 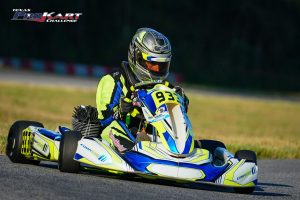 CRG pilots Max Hewitt and Graig Alvarez Jr. were the only two drivers in the Pro Shifter class and they split the wins on the weekend, while Miguel Garcia (G1) and Skyler Sutton (Honda Shifter) took their respective wins.  Alan Campbell joined Garcia in G1 on Saturday but did not compete on Sunday.

Josiah Tracy (Tony Kart) scored a runner-up finish and a win in the KA100 Senior class to score the series championship. Local racer Doug Foxworth (CompKart) joined the party in Houston and took the win on Saturday, chasing Tracy home for second on Sunday. Santiago Massey (Intrepid) showed good speed all weekend, winning the pole on Sunday to finish the weekend with a pair of third place finishes.  James Lundberg (Birel ART) took fourth on Saturday, but did not compete on Sunday. Matt Berendt (Ricciardo) finished fourth and fourth in the two main events. Camryn Reed (Tony Kart) was the only driver in the KA100 Junior class, and took both wins as a result. 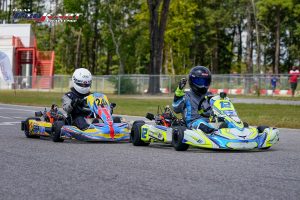 Royce Johnson and R.J. Guajardo each took home a win on the weekend in Briggs 206 Senior (Photo: Ken Johnson – Studio52.us)

The addition of the Briggs 206 class brought over two dozen different drivers to the series this year and it provided entertaining racing at every stop on the circuit.  Royce Johnson (FA Kart) completed an impressive season to score the series championship, finishing all three races in either first or second.  The fight up front for the title was close with all three of the contenders running for the win on Saturday, but Johnson sealed the deal with his third win of the season.  R.J. Guajardo (CompKart) finished second ahead of Tyson Knight (Kosmic) in third. Reigning Texas PKC X30 Masters champion Miguel Mier (Exprit) jumped into the action to take fourth over Zane Goff (Birel ART) in Round 5.  Guajardo stepped up on Sunday and swept all three sessions, but it was as close as ever, as he had to fight Johnson for the win through a contact-filled final lap.  Johnson carded his third second-place finish of the season while Mier advanced to the third and final step on the podium. Guajardo’s Sunday win cemented his runner-up position in the championship ahead of Knight. For his effort, Johnson won a Briggs generator courtesy of Briggs & Stratton, and Knight would also win a generator in a draw from all the entry forms from the event.

Lastly, the French’s awarded entry and tire packages to the three stand-alone races that they’ll promote in Texas in 2020.  They announced recently the revival of the street race in Lockhart (May 16-17) and the second running of their special event at COTA Karting facility at the Circuit of the Americas (August 21-22) dubbed ‘COTA Cup After Dark’, which will be a Friday-Saturday night race. P1 Promotions’ final event will be ‘Kartfest Amarillo’ at the Amarillo Kart Circuit in West Texas.  The classes for these events will be announced at a later date.