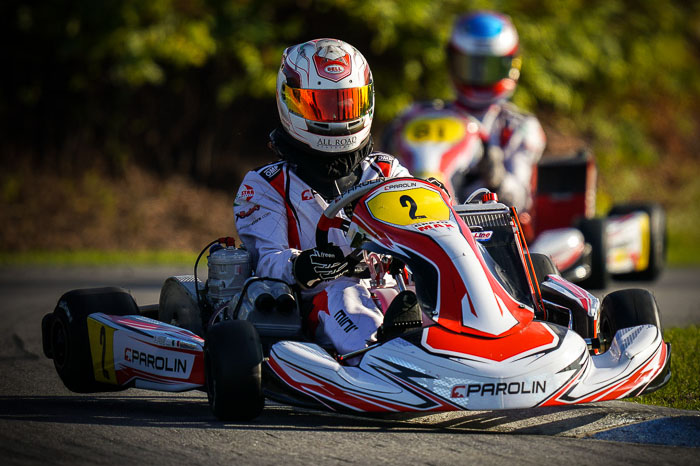 Parolin Racing Kart’s efforts extend to every category in Karting. Noted for several seasons by its dominance among the youngest drivers, Parolin also benefits from its success in Junior and OK to increase its presence throughout the market. In Finland, at the FIA Karting World Championship – OK and Junior, the Italian brand was the third largest chassis manufacturer with 16 drivers entered in its colours. Meanwhile, the performance was there with Racing Team drivers Gabriele Mini’ in OK and James Wharton in Junior.

“It was not the best feeling to come back from Finland without a podium in at least one of the two categories. The potential we have shown in Finland does not reflect what we have achieved in terms of results. Wharton drove a perfect weekend despite an arm injury suffered on Thursday, and after winning the pre-race two weeks ago he was ready to fight for the title. To James’ credit, after just three races with the team he was immediately on the pace and one of the main contenders for the World Championship – only bad luck denied him the opportunity to battle with Ten Brinke and Camara. In OK, after a sensational pole position for Mini’, both he and Sasse scored some very good heat results, including several top three finishes, but we suffered slightly in the rain. However, we are pleased with the performances of our OKJ and OK packages and our partnership with TM is leading to improvements at every event. We are just looking forward to the next competition to try to fight for victory again.”

A fast track known for its difficulty and selectivity, the Alahärmä Power Park circuit saw very variable grip situations, going through all possible conditions between completely dry and very wet. Whatever the conditions, the Parolin chassis enabled their drivers to best show off their talent.

Missed opportunity in OK for Mini’

The results of his first season in OK made Gabriele Mini’ one of the great favourites of the 2019 World Championship following his 2nd place in the European Championship. On the very challenging circuit of Alahärmä, he opened the battle by taking pole position among the 88 best drivers in the world. Unfortunately, destiny hit from the start of his first run. He lost control of his kart after being pushed onto a kerb and had to retire. The young Italian hopeful gave his maximum to return to 16th in the heats and regained another eight places in the Final to finish in 8th place. He remained the holder of the absolute fastest time of the meeting until the end.

Hugo Sasse had four good heats with a 2nd place and two 3rd places, but he was also delayed in the heaviest of the rain. At the edge of the top 10 on the Final starting grid, he was long in 10th position before falling back in the fight and finishing 19th.

Junior: Wharton on the right track

More and more successful at the wheel of his Parolin / TM Racing kart, the Australian James Wharton began with posting the 9th fastest time among the 104 participants of the Junior World Championship. He then asserted his claim by climbing to 4th place at the end of the Qualifying heats in which he never left the top three. He made an excellent start to the Final close behind the leader, on whom he was preparing his attack. Unfortunately, his engine betrayed him on the fifth lap of the race.

Brando Badoer and Lukas Malek were off the mark after a tough Qualifying. In a bubbling pack, they were unable to join the list of 34 finalists.

That same weekend, Rashid Al Dhaheri achieved his qualification for the 2019 Rok Super Final by winning the Rok Cup Italy at the Adria Karting Raceway with his Parolin chassis.

The karting season is far from over, but Parolin is already sharpening its strategy for next year to highlight the unanimously recognised quality of its chassis in multiple categories.