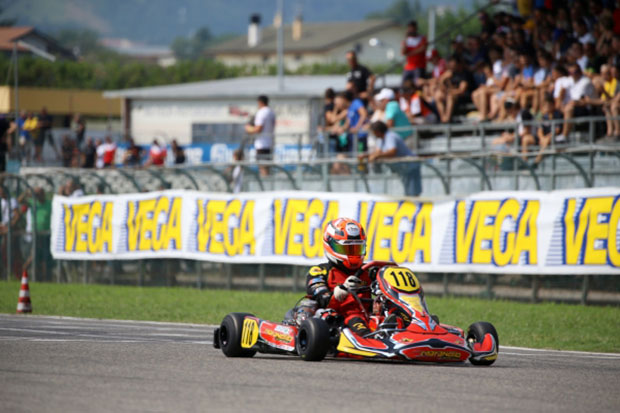 Francesco Iacovacci and Maranello Kart ended positively their Italian ACI Karting campaign securing the third place in the final standings after being among the main protagonists of the season and in the fight for the title until the fifth and closing round in Val Vibrata.

Team SG Race’s Francesco Iacovacci and Maranello Kart displayed a great competitiveness also in Val Vibrata, securing the podium in race2 after leading the first part of the race and being in the title fight until the end when he claimed P3. Iacovacci eventually was third in the final classification too and completed a season in which he has always been among the main protagonists since the opener in Castelletto di Branduzzo where he secured a double podium. In Siena and Sarno he then collected some further points before winning race2 in Adria and getting on the podium again in Val Vibrata.

Iacovacci commented race2’s podium in this way: “We lost a few points here and there during the season, otherwise we could have had better chances for the title. I am happy for running a good final also in Val Vibrata after a small mistake in qualifying that forced me to recover several places in the heats and in the first final. We missed some speed in the end, but I am happy for the third place because I could also have lost several positions in a contact but things worked out well in the end. I am very happy also for the third place in the final classification. Now we will focus on running a strong World Championship in Lonato.”

In KZN Under, Maranello Kart has fielded Michael Dalle Stelle, who was 18th in race1 and 22nd in race2, and Leonardo Pelosi, who had to retire from race2 after the 14th place in race1, while  Andrea Caregnato could not qualify for the final due to a penalty in the second chance race.  Davide Zecca was 13th in KZN Over’s race1 and seventh in race2.