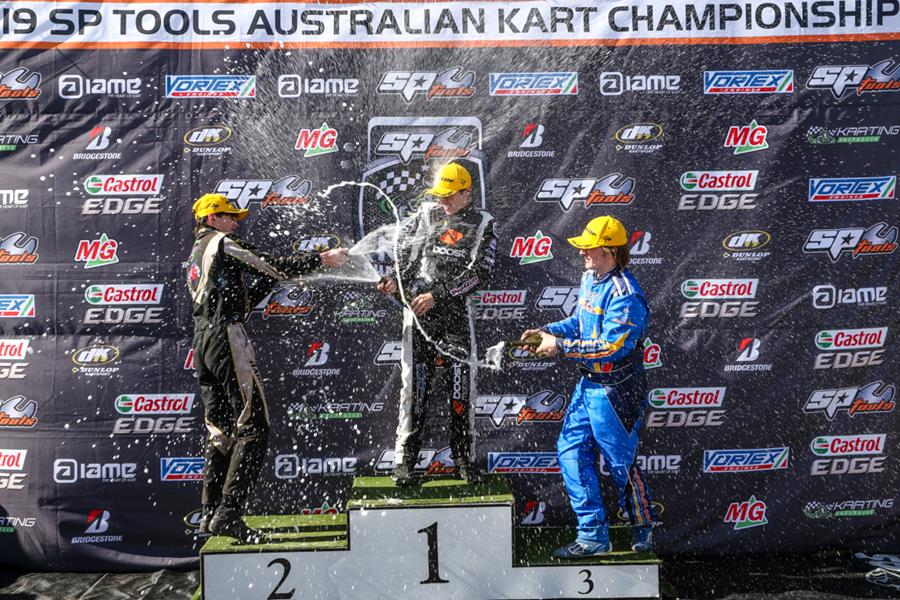 Bundaberg’s Troy Loeskow is finally Australian KZ2 Champion. After many seasons of looking like the dominant force in the SP Tools Australian Kart Championship, presented by Castrol EDGE and falling short, the Patrizicorse Ricciardo Kart driver finally got to unveil his Australia #1 on Sunday afternoon at the Grand Final round at Port Melbourne’s Todd Road circuit.

It has been a Championship of ebb and flow since the very first round and this weekend’s event didn’t disappoint with more twists and turns than the greatest thriller that could be written.

Loeskow pushed from 10th on the grid to third in a calculated, stirring drive in the Grand Final race. He entered the race in the points lead, holding a 19 point advantage over SodiKart Australia pilot, Jason Faint. Faint would have had to win the race and rely on Loeskow finishing well down the order to secure an unlikely Championship. Gladstone-based Faint was valiant fighting through to finish ninth.

The race was won by Boost Mobile Garry Rogers Motorsport Virgin Australia Supercars Championship driver, James Golding. He started on pole and led the entire way. He was pushed the entire distance by Shamick Racing Parolin pilot, Jay Coul – who got within striking distance of the victory, touching the rear of Golding’s kart at one stage.

Young star, Henry Johnstone was in the thick of the fight for the podium, however dropped back to fifth behind last round winner, Matthew Payne – who he will join in the factory Ricciardo Kart team at the World Championships in a few weeks time.

The elite Junior category, KA2 produced a cracking final. After wrapping the Championship on Saturday, the shackles were off Praga driver Luke Pink – who pushed himself through to secure a runner-up place in the Final.

Fletcher Harris – who was featured recently on Karl Stefanovic’s This Time Next Year – had jumped away and built a commanding lead. This was neutralised when an on-track incident triggered a full course caution. Harris was jumped at the start by a charging Christian Mansell, however showed tremendous guile to get back to the race lead.

Harris held on in the end to secure the win – a consolation of sorts for the Arrow driver after finishing second to Pink in the Title race.

Pro Karting Formula K driver, Adam Lindstrom ended a four decade drought across three generations to take the TaG 125 Championships – but that wasn’t without its drama and a tense wait post-race.

He was adjudged to have jumped the start which carried with it a 10 second post-race penalty. This dropped him down the order significantly, however it wasn’t enough for Velocity Kartshop COMPKART driver, Cody Brewczynski to deny him the Title.

The penalty applied to Lindstrom elevated New Zealand youngster, Jackson Rooney to the race win over the second Pro Karting entry of Jason Pringle and Brewczynski.

Whilst Brewczysnki finished second in the Championship for the second year in succession, Lindstrom got the Australia #1 after finishing second in Australian Titles on three occasions and between his Grandfather, Father and Brothers, they had amassed 23 podiums without a Green Plate!

Brad Jenner secured his third Australian Championship and another one for the Australian built Arrow chassis in X30. After starting well down the order on Saturday and his closest Championship rival, Jaiden Pope amassing a huge amount of points during the heats, the pressure was on heading into today’s longer races.

In the final heat, Jenner was the big benefactor from a turn one collision between Pope and his Tom Williamson Motorsport team-mate, Cameron Longmore. He was able to secure that heat race victory, however would still have to score some solid points in the final.

Pope led from the get-go and did everything that he possibly could – being placed in the lap of the Gods with Jenner starting further back in the pack.

New South Welshman Pope got the win in the end with Longmore playing the perfect rear gunner in a TWM quinella, while Kiwi Patrizicorse Ricciardo Kart driver, Ryan Wood completed the podium.

Jenner got through to fifth which was enough to guarantee the Australian Title.

KA3 kicked off the Grand Final races in a tense affair. With three drivers in with a chance at winning the Championship, all placed in various spots on the grid, it was always going to be an interesting race.

Championship leader Jack Bell’s cautious approach to the start almost didn’t pay off. In the opening lap skirmishes, Tony Kart Australia driver Bell was shuffled down the order, while Oscar Priest in his Boost Mobile Arrow charged forth to the lead of the race.

Priest would have to rely on Bell not finishing to win the Championship, however in the end Bell finished in 17th position – grabbing his first ever Australian Title.

The other Championship aspirant, Matthew Waters charging through to finish in fourth position.

Without question the race of the day was the KA4 Junior final. Kobi Williams held a commanding lead heading into the final, however there was still a mathematical chance that should he strike misfortune and not finish, or finish deep in the field, that Praga driver Hugh Barter could cross the line first and steal the Australia #1.

The duo were locked in an intense fight for the top three positions in the final along with Scuderia PCR driver, Cody Maynes-Rutty.

Each had an opportunity to lead the race, with Williams adopting a conservative approach around half race distance sitting back in third and allowing Barter and Maynes-Rutty to fight it out. The duo swapped the lead at least twice a lap for the majority of the race.

Williams got among the fight late in the race, but quickly backed out of it with no need to get into hand to hand combat to be awarded the Title and a healthy gap between himself and fourth placed driver, Joe Fawcett.

On the last lap, Maynes-Rutty – who has been racing extensively in Europe over the last two seasons in addition to Australia – crossed the line by a mere four one-hundredths of a second over Barter, with Williams third.

In Cadet 12, Harry Arnett was handed his second consecutive Australian Championship before the final even got underway. With 52 entries, the racing was conducted in groups. Arnett was in the first group that raced on Sunday morning and got through his final unscathed.

The only driver that could challenge him, Kristian Janev got into a three way fight in the final heat which resulted in a non-finish and no heat race points, handing Arnett a 40 point lead heading into the Final.

Remarkably, the A1 Engines team didn’t tell Arnett that he had enough points to win the final, and a disaster for the Victorian ensued!

Jesse Lacey took his first ever Cadet 12 round win in the AKC for Energy Corse by a healthy 1.4 seconds. Max Walton used his new Z-Corse Parolin chassis to great effect to come home in second position, while Caleb Spence had a tremendous day getting his first ever AKC podium in third.

The battle for Cadet 9 went right to the wire between Ky Burke and James Anagnostiadis. In a story familiar for many categories the top two in the Championship were locked together on the track. Anagnostiadis had a stellar weekend and took a three tenth of a second win on his home track, however with Burke bringing his Energy Corse kart home second, the Championship debutant had enough points to grab the youngest Australian Championship for 2019.

Jenson Burns came home in third position after earlier in the race being part of a group that saw his twin Jaxson collide with another competitor and collect the tyre bundle at rapid speed.

Thus brings to an end the 2019 edition of the SP Tools Australian Kart Championship.

Off-track the Championship Placegetters and other special award winners, along with team and industry awards were presented at a gala presentation at the Marvel Stadium in Melbourne’s Docklands on Sunday evening.

Dates for next year’s Championship will be released shortly.

All the information about the Australian Kart Championships and the sport can be found at www.karting.net.au.

For the Full Results https://speedhive.mylaps.com/Events/1717192