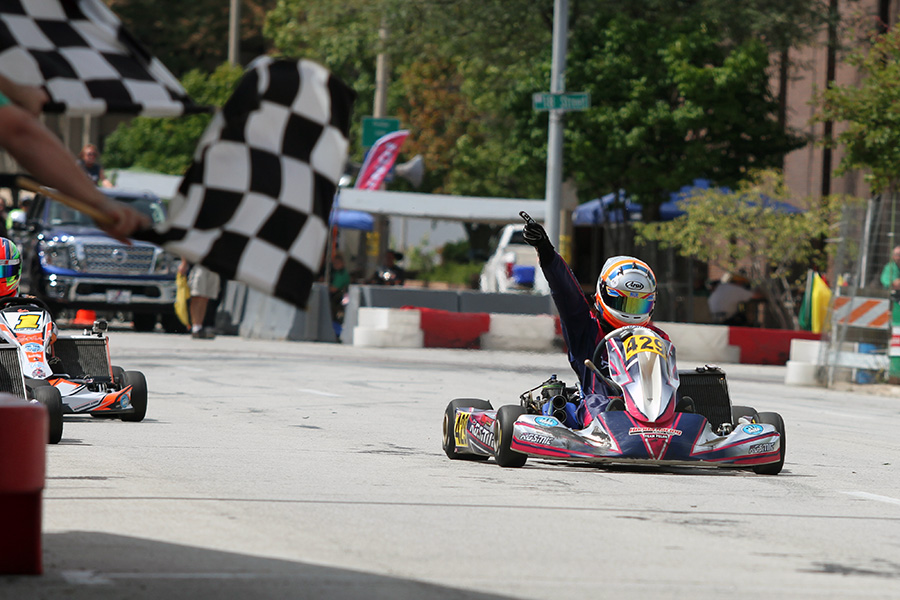 Rory van der Steur is set to defend his King of the Streets victory from 2018 (Photo: EKN) 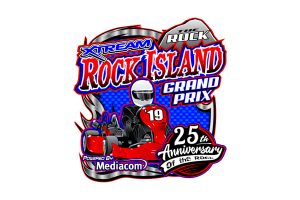 History is set to be made this Saturday when karts hit the streets of Rock Island, Illinois. The 25th edition of the Xtream Rock Island Grand Prix powered by Mediacom begins at 8am Saturday morning when the first practice sessions around the 6/10-mile course. The course and planning of the Labor Day weekend racing festival in the Quad Cities area dates back to the original event in 1994. Year after year, the volunteer-based event welcomes karters from around the world to take part in two days of fun, intense, high-adrenaline action on and off the track.

The city streets of Rock Island transform at 5pm Friday into a race track and festival overnight. Action begins Saturday with two rounds of practice for the different groups before heat races are held for the 17 categories competing over the weekend. Following the morning warm-up, all main events are then held on Sunday for a chance to put their names into the record books, and take home the coveted Rock trophy.

A majority of the divisions are now based around the Briggs & Stratton 206 engine package. What began with one class and 24 entries in 2012 has now blossomed into eight classes and the large percentage of the 245 pre-entries taking part. The grassroots powerplant made in the USA has rejuvenated the event, bringing club drivers and top-level pilots against one another on the city streets. 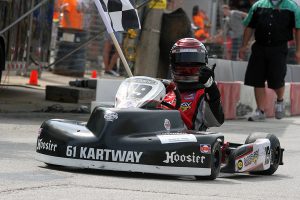 Tony Neilson is second overall in the all-time winners list at RIGP, set for 10 classes in 2019 (Photo: EKN)

eKartingNews.com will once again partner with the RIGP family to produce a live audio play-by-play broadcast from the start-finish line on Fourth Avenue, all part of our EKN Trackside Live coverage program along with social media and forum updates. Tim Koyen is back for his fourth year on the microphone to call the action throughout the weekend, and those not in attendance can listen in both days at www.ekartingnews.com/live courtesy of Hoosier Kartsport, DeepSeat, and Acceleration Kart Racing.

Tony Neilson, one of the nation’s top kart-racing talents from nearby Delmar, Iowa currently sits second in the all-time Rock Island win list with 17, trailing only the ‘Emperor’ Gary Lawson who has 25. But Neilson could put a good dent in that spread after entering his Margay machine racing in seven of those Briggs division, adding 3 Yamaha classes for a total of 10 starts. It was in 2015 where he won six of the seven classes he entered. Last year was the first winless event for Neilson since the 2011 event. Should Neilson make all 10 starts, it will be the highest total since Jason Birdsell in 1998 where he became the original Ironman, entering nine classes – winning five of them.

Ironman performances are nothing new to the Rock Island Grand Prix, and Neilson is not alone this year. Fellow RIGP winner Michael Welsh is currently tied for fourth in the all-time win list with nine victories. His most recent was in the Briggs 206 Heavy 2 division last year. Welsh is racing in a total of eight classes on the weekend. Scott ‘Skitchy’ Barnes from Bermuda is among the most experienced international driver at the RIGP. Barnes is a three-time winner at RIGP, and will be racing in a total of four Briggs 206 classes and three Shifter divisions. Among his wins was last year’s Margay Ignite Senior triumph. 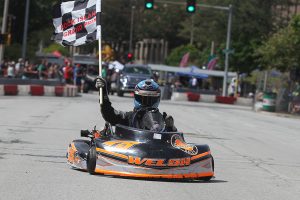 Michael Welsh is among the defending winners returning for the 25th edition of RIGP (Photo: EKN)

Every year, the quickest category on the track is the King of the Streets. This year marks the 20th edition of the event, with the 18 being held at the RIGP. Nearly 30 drivers pilot their shifterkarts more than double the speed limits on the city streets to be crown the King. Defending champion Rory van der Steur is set to defend his crown with 2017 and track record holder Austin Wilkins back as well. 2015 King Josh Lane is the only other returning champion in the field, filled with a number of drivers looking to grab their first crown. Jake French and Billy Musgrave are among the top shifterkart drivers in the country today, set for a run at the title. French is a former RIGP competitor, making his first start since 2012. Croc Promotion teammate Musgrave is set to make his RIGP debut. Musgrave is a three-time SKUSA SuperNationals winner and defending Streets of Lancaster Grand Prix winner. Another top driver in the country is recent SKUSA Pro Tour Pro Shifter 2 champion and Battle at the Brickyard winner Race Liberante, making his first RIGP start. Add in Barnes, Quincy Grand Prix winners Joe Ruch and Zachary Schiff, young guns Devon Smith-Harden and Kyle Kennedy, along with veterans Lance Lane and Jason Campbell – this year’s King of the Streets is set to be very exciting in addition to the Open Shifter race toward the end of the day.

One of the largest categories will be the Briggs 206 Medium and Heavy divisions. Of the four main events last year, two were won by the young Riley Scott. The now 16-year-old made his first RIGP start last year, beating a number of former winners and veterans to win both Medium main events. Riley will not be wearing a helmet this weekend in Rock Island, having suffered a broken wrist last weekend during a club race. His father – Jeff Scott – won the Briggs 206 Masters class, and will not be racing as well, leaving three slots for new names. Neilson won the last four Medium main events prior to Scott’s win, and will be among the favorites in the two Briggs 206 Heavy and lone Briggs 206 Medium class, along with former RIGP winner Matt Pewe, Welsh, Evan Stamer and Justin Wishard.

Just like the Medium division, the Briggs 206 Masters class was all Neilson until last year. Since the class made its debut in 2014, Tony won the first four before Scott edged him out last year. Neilson returns as a favorite along with Welsh, Jerry Miller, two-time Yamaha winner Morgan Schuler, and former RIGP winner Jeff Dolian. 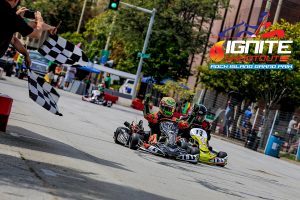 Dolian won the 2016 edition of the Margay Ignite Senior class, the second year of the program at RIGP. Last year, Scott Barnes scored the victory, edging out Dolian for the victory. Both are back for more with Tony Neilson dipping in for a chance to battle, along with Dash at Daytona winner Evan Stammer and Battle at the Brickyard winner Keith Scharf. New for 2019 is a second main event for the Ignite Senior class, so all of these drivers will compete twice for a Rock trophy. The Ignite Masters class made its debut in 2017, with veteran ‘Pistol’ Pete Vetter earning the inaugural two wins. Vetter is not competing this year, leaving for a new name to take home the victory. A number of veteran drivers are in the field, including Neilson, Scharf, Barnes, along with OVRP’s Tim Hannen, Cup Karts North America’s Greg Jasperson, and EKN’s own David Cole. This will mark Cole’s eighth straight RIGP start, and his fourth year with the Ignite program.

New for the 2019 RIGP is the addition of Briggs 206 CIK. The 4-Cycle world has been in transition since the debut of the Briggs 206 powerplant. Typically, the full bodywork remained on the 4-cycle karts, and have continued in the Briggs divisions at RIGP. Around the country and around the world, full bodywork is rare, and new karters today are not welcoming the ‘old’ version of USA bodywork. The CIK class was introduced to allow those with the ‘CIK’ style bodywork a class of their own. A dozen drivers have entered for a chance to earn the first Rock in the category. Among the contenders are Barnes, Welsh, Wishard and 2016 Margay Ignite Junior winner Ashton Wheeler.

On the flip side, Yamaha numbers across the country continue to decrease, and RIGP is experiencing that as well. Yamaha was part of the inaugural RIGP and will be part of the 25th running with three divisions racing on the weekend. Morgan Schuler was the victor in both Yamaha Heavy main events last year, earning his first two Rock trophies. Schuler will not be in any of the Yamaha classes. Defending Yamaha Medium winner Tim Goettsch will be in all three, coming into the weekend with 11 career victories to sit tied for third overall. The battle to acquire the third spot alone will see him battle with yearly rivals Neilson, Welsh, and eight-time RIGP winner Michael Dittmer. 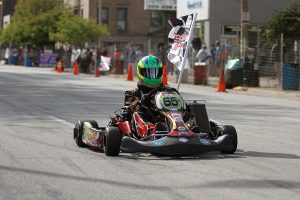 Lance Lane is gunning for his fifth victory at the Rock (Photo: EKN)

Making its return to RIGP is the TaG division. The Touch and Go engine platform began with former RIGP race director Tom Argy Jr. The industry veteran was among the key figures to bring this engine platform to the USA and Rock Island. After the category was cancelled for lack of entries, TaG Senior returns with 14 drivers entered. King of the Streets competitors Josh Lane, Austin Wilkins, Devon Smith-Harden are among the contenders along with Aaron Snyder and Aaron Bromberek. A total of seven states are represented in the class.

Four-time 125cc Masters Shifter winner Lance Lane is gunning for his fifth Rock trophy this year, and to surpass the total of his son Josh Lane. This category will be among the more competitive with Scott ‘Skitchy’ Barnes, Jason Campbell, OVRP’s Tim Hannen and Christopher Rock in the field. The history of the sport will be on display throughout the weekend with the three vintage classes. Vintage Mac, Vintage Open and Vintage Yamaha round out this year’s categories.

There will continue to be other attractions offered during the race day and into the evening. This year’s Sunday Car Show is expected to include 50 cars from the Quad City Camaro Club, QC Cruisers, QC Gearheads and QC Mustang Club on 18th Street near WHBF TV. The popular Oscar  Meyer Weiner Mobile will be at the car show Sunday greeting fans, giving away Weiner Whistles and samples. There will also be a variety of food and merchandise vendors in the center of the race course.

Thursday, Friday and Saturday nights will feature a full lineup of outdoor concert entertainment. Grand Prix Weekend will be kicked off with a free family concert in Schwiebert Riverfront Park at 7 p.m. Thursday night sponsored by the Rock Island Parks and Recreation Department and featuring the high energy group Wicked Liz and the Bellyswirls.