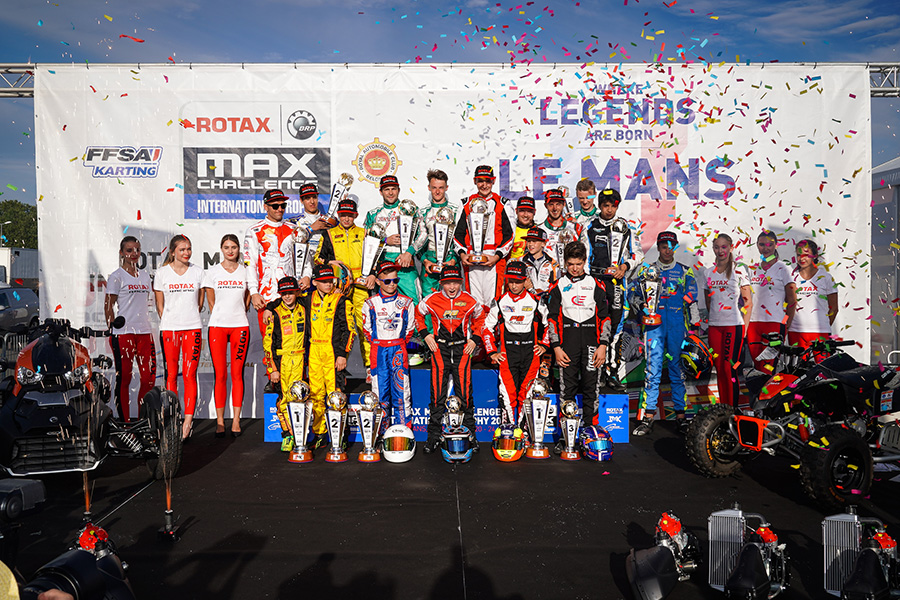 By partnering with 3MK Events and the Automobile Club de l’Ouest (ACO), BRP-Rotax has had an unquestionable success with the launch of its new world-class event at the Le Mans circuit. Almost 300 drivers, 44 countries, five continents, impeccable organisation, a magnificent circuit, thrilling races, a magical atmosphere, prizes and much more, led to delighted participants returning with a smile and with a greater desire than ever to continue their kart racing programme in the Rotax categories. The objective was met at Le Mans from 20th to 24th August, 2019.

There was good weather for the much-awaited debut of the Rotax Max Challenge International Trophy. The friendly and festive atmosphere was bright during the five days of competition, while the races were held in ideal conditions. The presence of many major teams and the best-reputed professionals further strengthened the standard and seriousness of the competition, while offering all enthusiasts the opportunity to compete in a very high quality new international event on their own kart in the heart of summer.

Finally, the best were rewarded with breathtaking prizes: two Can-Am DS 90 quads offered to the Micro and Mini Max winners, complemented by four invitations for the Rotax MAX Challenge Grand Finals in Italy (Sarno) in October for the Junior, Senior, DD2 and DD2 Master winners. The 2nd-placed drivers in the six categories were awarded Rotax MAX engines and the 3rd with Rotax vouchers for €1000.

Two draws open to all participants offered the opportunity to win two exciting Can-Am Rykers! Another lottery reserved for the Rotax Senior, DD2 and DD2 Masters drivers gave them the chance them to take part in an exceptional experience: an introduction to aerobatics.

The competition itself spanned five intense days during which 42 Qualifying Heats were contested before concluding with six Prefinal and no less than ten Finals to offer maximum track time and competitive enjoyment.

Micro: Strauven from Qualifying to the Final

The 32 drivers from 8 to 11 years old competed on their own chassis together with a brand new Rotax Micro MAX engine supplied by the organization using the Rotax Engine Lottery System. Thomas Strauven (BEL – Exprit – GKS Lemmens) achieved pole position in Qualifying, his team-mate Lenn Nijs (BEL – Exprit – GKS Lemmens) dominated the Qualifying Heats and Juliusz Ociepa (POL – CRG – KRK Racing) won the Prefinal. After an intense battle, Nijs passed Strauven as they approached the last lap, but he was later penalized for his manoeuvre and therefore classified 2nd behind Strauven. Ociepa was third on the podium, followed by Christopher El Feghali (LBN – KR – Dan Holland Racing) and Alejandro Umana (COL – Exprit – GKS Lemmens).

Equipped with Rotax Mini MAX engines with the same lottery system as Micro, the 10 to 13 year olds delivered some tough battles. Valentin Hervas (FRA – Birel ART) was the fastest in Qualifying, Augustin Bernier (FRA – KR – PB Kart) took the lead in the heats as well as in the Prefinal against his rival Jolan Raccamier (FRA – Birel ART). Raccamier and Bernier finished 1st and 2nd in the Final, but were subsequently disqualified and Arthur Poulain (FRA – KR – PB Kart) was finally declared the winner ahead of Piotr Czaja (POL – Energy – V Kart Racing Team) and Valentin Hervas. Birch Kristensen and Tom Braeken (BEL – Parolin – SP Motorsport) finished 4th and 5th.

Bruynseels highlighted in the Senior Finals

With 91 participants, the Senior MAX competition proved exciting for the many spectators at Le Mans. César Gazeau (FRA – FA Kart – RM Concept) dominated the first part during Qualifying and the Heats. Then Illian Bruynseels (BEL – Tony Kart – Bouvin Power) won the Prefinal and the Final with a 2.6” lead over Gazeau who was struggling to reduce the gap. Lewis Gilbert (GBR – Tony Kart – Strawberry Racing) secured 3rd place followed by Guilherme De Oliveira (PRT – Kosmic – KR Sport) and Charles Tesnière (FRA – Kosmic) who drove a great race to round out the top 5.

Although Carl Cleirbaut (BEL – Tony Kart – Bouvin Power) took pole position in DD2 Masters, Romain Mangé (FRA – Tony Kart – Malevaut Sport) returned to centre stage in the heats and was unbeatable both in the Prefinal and in the Final against Slawomir Muranski (POL – Tony Kart – 46 Team), while Rudy Champion (FRA – Sodi) was on the third step of the Final podium in front of Roberto Pesevski (AUT – Sodi – KSCA Sodi Austria) and Scott Howard (AUS – Sodi).

A total of four drivers from the United States traveled to France to compete thanks to their tickets earned from the RTX All Star Finals and the Stars & Stripes program. Ryan Shehan had the best finish, placing ninth in the Junior Max A-main. A 25th result for Kyle Apuzzo in the competitive DD2 division. Kaden Dosmann finished 26th in the Micro Max while Lane Vacala was sixth in the Senior Max C-main.

The complete results from the RMCIT 2019 at Le Mans, together with the YouTube link to the Livestream video of the afternoon finals Saturday and much more information about the first edition of this exciting new event, are available on the official website at www.rmc-internationaltrophy.com

Follow the RMCIT social media channels for all the Facebook LIVE updates from the racing action, with extra highlights of the event and even more great images from Le Mans to be added soon.