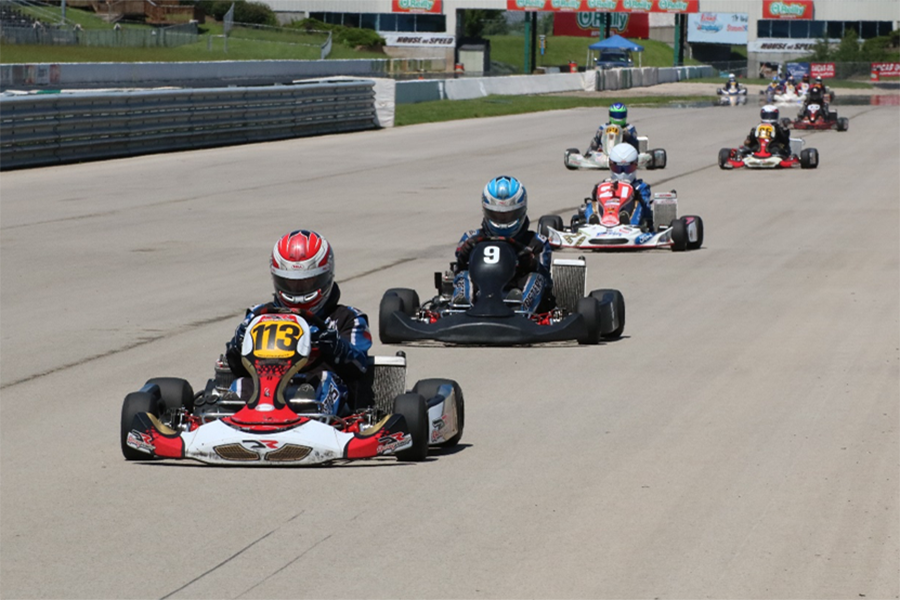 As summer comes to an end the Summer Sizzler has return for the 2nd year to Heartland Park in Topeka, Kansas.  The Summer Sizzler is a joint venture between 3 great karting organizations, WKA, KART/MARRS and CES.  This race is the 2nd race this year that these 3 groups have gotten together in hopes of bringing in a diverse group of karters.  With Kansas bringing the scorching temperatures there was bound to be some hot and heavy racing as well.

Starting off the weekend of racing was the Sprint B&S LO206 class.  On Friday this race brought out 14 racers, but that number increased to 27 on Saturday and 26 on Sunday.  With Lindsey Simon leading the points race with the KART organization, would she have what it takes to bring home a 1st place finish.  Unfortunately, lady luck was not on her side this weekend, but there was some great racing fighting for the checkered flag.  With thunderstorms the night before practice was late getting started which meant not much time to prepare for the race Friday afternoon.  That did not stop Joel Negus from dominating the track.  Right out of the gate Joel was passed by the majority of the field with Jason Lorang leading the 1st lap.  It didn’t take long for Joel and his pack, Craig McNeese and Stephen Gibson to track down the leader and take over the top 3 positions. They continued to hang on to the lead with Joel Negus securing a 1st place finish.

“We could tell right from the start of the race that our gearing was quite a bit taller than the competitors. We started towards the front but by the first corner the majority of the field has passed us. It didn’t take long for our gearing and top speed to move us to the front. I lead every lap with my race buddies right behind me.”

Again, Kansas thunderstorms pounded the track Friday night and left it with a few rivers in a couple of the turns.  This left many karters with little track time to prepare for the afternoon races, but this did not stop Joel and his crew.  This time they started out leading the field but only after a couple of laps they were overtaken by another pack of karters led by Stephen Hefley.  Unfortunately, this victory was short lived, as Joel Negus and his teammates had once again tracked down the leaders and secured the win.  Regrettably Joel’s luck would run out on Sunday as teammate Craig McNeese secured the win at the line in the Sprint B&S LO206.

“Heartland park track is a fantastic smooth fast track. the facilities are first class and we can’t wait to go back. Our LO206 kart reached a top speed of 77 MPH which was the fastest we have run on any road race.” 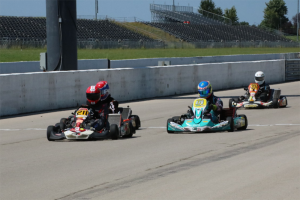 The Sprint 125cc Shifter class also brought out the karters with 24 on Saturday and 19 on Sunday.  Russ Pyles came to Heartland Park leading the points race in WKA, but would he have what it takes to bring home the checkered flag?  Right out of the gate one of the top contenders in the class was Pierce Baldus, who has been busy running the ROK circuit.  Having an off weekend, he decided to run the Summer Sizzler in hopes of bringing home gold.  With the drop of the green flag, Jeff Mills had the horsepower and gearing to separate himself from the rest of the class. He continued this pace for the entire race with a 24 second lead.  Pierce Baldus and Coltin Craigo didn’t let this lead discourage them as they continued to battle for 2nd and 3rd.  Ultimately Pierce won the battle and took 2nd place by only .10 of a second over Coltin.

Again, Sunday brought a little water on the track, but this did not stop the 125 Shifters from fighting the good fight for 1st place.  This time Jeremy Lightwine and Pierce Baldus were able to break away from the pack early on. After just a few laps Jeremy slowly made his move by driving away putting 6 seconds between himself and Pierce.  With only 4 laps to go Pierce was able to overtake the lead from Jeremy but this would be short lived.  Unfortunately, Pierce’s luck would not hold as Jeremy took the checkered flag beating Pierce by 0.15 seconds.

“All in all, it was a great karting weekend, I recommend marking your calendars for Heartland Park in 2020. Looking forward to the Kart MARRS National Championship Race at Gateway Motorsports Park October 4th through the 6th. Thanks to Trei at Tanda Racing and the rest of the team, Goya Foods, my tuner Alex Norris and my mother and father. Thank you all for the support.”

Even though the Sprint IAME class did not bring the numbers they made up for it in good ole fashion racing.  Leading the 1st lap the Brown brothers worked together to separate themselves from the group by lap 4.  This would not last long as Jason Lorang hunted them down where they would continue to battle for the entire race.  In the end Jason had what it took to overtake the Brown racing team securing the checkered flag. 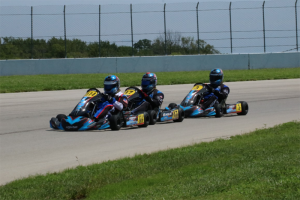 After a disappointing loss on Saturday the Brown racing team was determined to come out with a win on Sunday.  With a gear change and some chassis adjustments Jaime and John came out swinging.  Right from the start they were able to separate themselves from the rest of the group with Cole Peschang hot on their trail.  After only a couple of laps Jamey Brown started pulling away from teammate John, while Jason Lorang overtook the 3rd position from Cole Peschang.  This battle continued for the rest of the race with Jamey winning by almost 30 seconds over teammate John Brown.

According to Sunday’s Sprint IAME winner Jamey Brown, “Topeka was an incredible event that we were proud to be a part of. With the race being a combined event, you always wonder just how many racers will show up. The 3 organizations came together for the sport of Karting and made it work for the benefit of the racers. It is really special to see what can be done in our sport when organizations come together and focus on one goal.”

Thank you all the karters who came put to supports the race at Heartland Park.  We look forward to seeing everyone at the next stop on the Vega Road Race series, which will be in Bowling Green, Kentucky at NCM Motorsports Park November 8th, 9th and 10th.