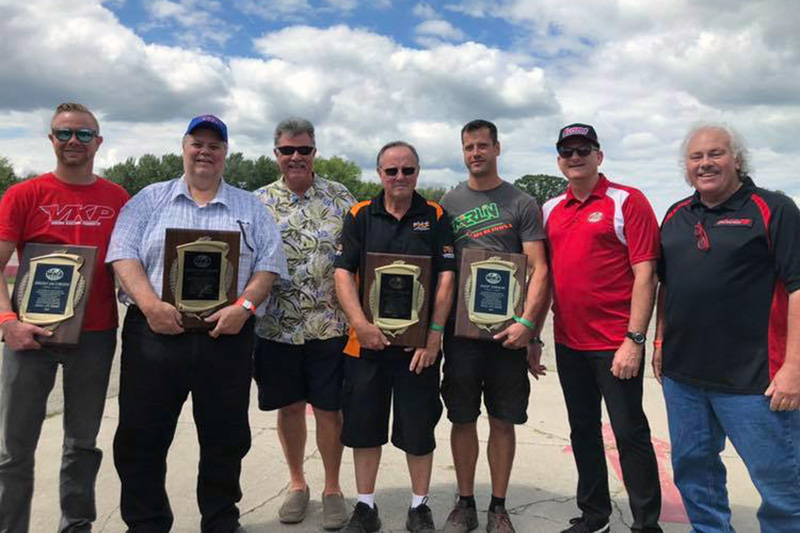 Brian and Steve Jacobsen along with George and Jamie Sieracki were inducted into the WKA Hall of Fame (Photo: WKA)

The fifth stop of the 2019 World Karting Association Bridgestone Manufacturers Cup Series program took competitors back to the Wolf Paving Raceway this past weekend. The Dousman, Wisconsin circuit, home of the Badger Kart Club, hosted the FranklinKart.com Nationals, serving as Rounds 9 and 10 for the championship program. Four drivers were able to leave with double wins, as podium drivers took home the famous ‘cheese cow’. 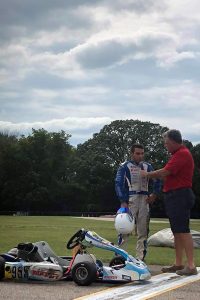 KA100 Senior championship leader Alexander Kardashian (Top Kart) extended his advantage in the title chase with two wins at Badger. It was a near sweep on the weekend, with the Saturday qualifying session the only time Kardashian was not in the P1 position. Jeremy Fierke (Kosmic) set the fast time with Taylor Maas (Merlin) and Kardashian off by only 63 thousandths. Kardashian went on to win both heat races, and led all 18 laps of the main event, holding off Maas with Fierke in third. Kardashian went untouched throughout Sunday, putting in a perfect round and leading all the laps of both the Prefinal and Final for his fourth victory of the season. Maas and Fierke drove to the same positions in the main event.

A trio of drivers continued their battle in the X30 Junior division, with Hayden Jones (Tony Kart) coming out on top both days. Nathan Nicholson (Tony Kart) set the tone on Saturday, posting fast time in qualifying and winning the two heat races. The intensity picked up in the Final, with all three drivers taking turns at the point. Jones was able to secure the top position with four laps remaining, driving away to a 1.6-second advantage for his first victory of the season. Adam Maxwell (Top Kart) grabbed the second spot from Nicholson. Jones began Sunday on top after qualifying and led all but the last lap of the Prefinal. Contact between he and Nicholson allowed Maxwell to slid ahead and take the win. Maxwell led the first two laps until Jones took over. From there, he pulled out to a 1.8-second advantage for his second victory, extending the point lead. Maxwell was second with Nicholson in third.

Adam Brickley (Nitro Kart) was the third championship leader to double up in Badger, earning both wins in the Mini Swift class. There was no clear leader on Saturday during the day, as Austin Jurs (Merlin) set fast time in qualifying while Brickley and Ben Maier (Nitro Kart) won the heat races. Brickley led the majority of the 18-lap Final, driving away to a 2.4-second advantage for his second victory of the season. Jurs beat Maier to the line for second. Brickley would then go on to sweep the action on Sunday. After setting fast time in qualifying, Brickley led the entire Prefinal. After getting shuffled back to third at the start of the Final, he retook the top position and held off Jurs for the victory. Ava Dobson (Merlin) was a close third. 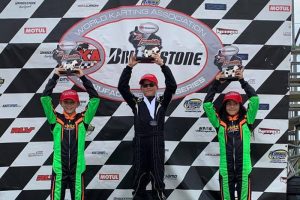 Adam Brickley stood on top of the podium both days in Mini Swift (Photo: WKA)

Maier ran double duty, along with a handful of Cadet drivers, and was the fourth double winner on the weekend with his two wins in Briggs 206 Cadet. He and Nitro Kart teammate Christopher McKeithan dominated the action on Saturday. Maier edged out McKeithan by only 49 thousandths on qualifying for the top spot. Both heat races went in the favor of McKeithan, however, the Final was a three driver fight. Championship leader Spencer Conrad (Nitro Kart) put in his bid, leading seven of the 18 laps in the Final. It came down to the final lap, with Maier jumping from third to first for the victory over McKeithan and Conrad. Only two thousandths separated the fast time for Conrad and McKeithan in Sunday’s qualifying session, with the advantage to Conrad. Maier was back in seventh, only able to complete one lap but came back to win the Prefinal. That was all he needed as Maier led all 18 laps for his fourth victory of the season. Conrad was a solid second with McKeithan in third.

The largest category of the event was the event was the KA100 Junior category. Two drivers earned their first victories of the season – Westin Workman and Zach Collins. Workman (CompKart) was able to win both heat races on Saturday before leading 17 of the 18 laps in the Final for the victory. Collins (Top Kart) came up 78 thousandths short at the line from stealing the top spot with top qualifier Adam Maxwell (Top Kart) in third. Collins took control on Sunday, winning the Prefinal and passing Workman late in the Final to secure the victory. Maxwell completed a four-podium weekend with another third place result. 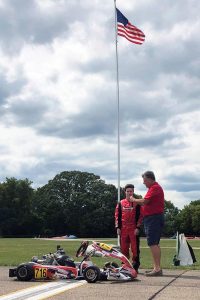 A number of young drivers were fighting for victory all weekend in the Micro Swift division. Championship leader Spencer Conrad (Nitro Kart) started out the weekend with fast time in Saturday qualifying. Ava Hanssen (Merlin) and Brayden Zirves (Merlin) each took a heat race win, and yet, none of the three were able to come out on top in the Final. Starting seventh, Austin Olds (Top Kart) quickly moved up inside the top-three and then second after Conrad retired while running second. Hanssen led the first 17 of 18 laps, with Olds completing a last lap pass for the victory. Hanssen settled for second with Cade Jaeger (Nitro Kart) in third. Hanssen fought back on Sunday to set fast lap in qualifying by over two tenths of a second. She would be shuffled back in the Prefinal, with Conrad scoring the win. Similar to Olds, Indy Ragan (Merlin) started the Final in sixth, and fought forward to be in the lead group. Sitting third as they took the white flag, Ragan came around with the lead to earn the victory. Hanssen missed out on the win by 54 thousandths at the line with Christopher McKeithan, subbing for Hoyt Mohr (Nitro Kart), earning the third step on the podium.

Colton McQuade and Holden Harder scored the wins in the Kid Kart division. McQuade set fast time and drove to an 11-second victory, his first of the season. Carson Benjamin grabbed his first podium of the season with the runner-up finish over point leader Jacob Schaible. Harder finished fourth, and was able to improve on that Sunday with a victory, his third of 2019. McQuade ended up second with Schaible notching his ninth podium finish of the 10 rounds.

A Briggs 206 Senior class joined the event as a local option division. Brian Rettig took the victory on Saturday over Danny Corcoran and Nick Ksoblech. Sunday was Ksoblech’s turn, sweeping the action on the day. Corcoran was runner-up once again with Emily DeMaster joining them on the podium in third. 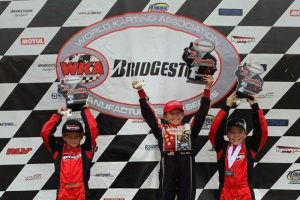 During lunch on Saturday, four new members joined the WKA Hall of Fame with a pair of father/son duos. George and Jamie Sieracki of Franklin Motorsports along with Steve and Brian Jacobsen of VKP were all inducted into the Hall of Fame with current President Kevin Williams and former presidents Rick Dresang and Randy Kugler in attendance.

The WKA Bridgestone Manufacturers Cup Series closes out the 2019 season with the Grand Nationals, set for October 11-13. The New Castle Motorsports Park will host Rounds 11 and 12 with the famed WKA ‘Eagle’ awarded to race winners on the weekend.