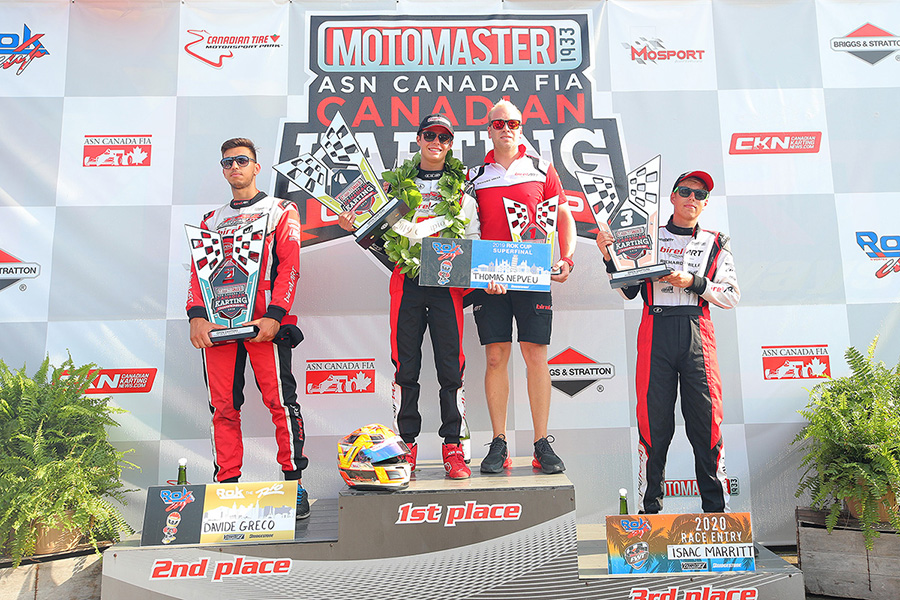 Competing at the 2019 ASN Canada FIA Karting Championships last weekend at the Canadian Tire Motorports Complex in Bowmanville, Ontario, Birel ART North America pilots were among the many drivers entered, looking to claim the elusive Canadian National title. With weather changing from morning to afternoon nearly every day of competition, the karting powerhouse team worked through the foggy, wet track in the morning to a dry track in the afternoon, coming away with five National titles, seven Vice-Championships and 15 podium finishes.

“It was a superb weekend for PSL Karting/BirelART North America and our Canadian dealers,” stated Birel ART North America President Dominic Labrecque. “All our drivers were extremely fast and there was some intense racing on the schedule. We earned multiple Canadians Championship and Vice-Championship titles this year, which overall is a big success!”

Dominating the ROK Shifter category, Birel ART North America narrowly missed sweeping the top-five results in the main event. Thomas Nepveu progressively improved throughout the day claiming third in qualifying, second in the prefinal and topped the blocks in the main event. Davide Greco started his Canadian National effort off with the pole position in qualifying and backed that up with the prefinal victory. Greco had to settle for second over teammate Nepveu with Isaac Marritt making it a complete Birel Art North America sweep of the podium. Justin Luik would also finish fifth. Finishing 1 – 2 in the ROK Shifter Master class, Dany St-Hilaire took the main event victory ahead of team mate Nicholas Bedard as the duo were the class of the field all week long.

Two more top five finishes came from the Briggs Cadet class as Ashton Henckel finishes second, remaining consistent throughout the day. Lucas Delongchamps improved from his qualifying position to end his weekend in fifth while George Deadman, Jackson Pearsall and Ethan Lower ran in the top five throughout the Canadian Championship event weekend.

Frankie Esposito claimed the Vortex Mini ROK Pole Position and prefinal win but had some trouble in the main event falling outside the top five. Caleb Gafrarar picked up the pieces turning his third place qualifying effort into a second place result upon the weeks’ conclusion. Ashton Henckel finished fourth while Cooper Simpson showed great pace in qualifying to garner a top five result in the timed lap session.

It was another pair of podium results in the Briggs Junior class as Marco Filice crossed the stripe in second while Callum Baxter was third. Baxter claimed the pole position earlier in the week and fell outside the top five in the prefinal but rebounded to stand on the podium. Filice steadily improved from qualifying through the weekend finishing fourth in the prefinal and leveling up to second in the main event.

ROK Masters drivers were chasing one competitor all weekend long and that was Ricciardo Kart’s Vatche Tatikian. With his only falter being qualifying where he put his Vortex powered kart on the front row, Tatikian dominated the rest of the weekend claiming the prefinal win and main event victory. Vortex ROK Senior saw BirelART perennial front-runner Patrick Woods-Toth maintain consistency throughout the weekend to finish fourth. Mackenzie Clark had a strong top five run in the prefinal but was unable to maintain position for the main event.

Landen White, Cooper Smith and Ayden Ingratta swept the Briggs Junior podium and were the dominant trio in the class on the weekend. White swept the results taking the pole position, prefinal win and main event victory while Simpson went third, third and second. Ingratta qualified on the front row and found trouble in the prefinal but rebounded in the main event to stand on the blocks.

What started out looking great in qualifying with three drivers in the top five of Briggs Masters ended with only a fifth place result at the end of the main event. Steven Macvoy qualified second, just ahead of Levon Beaudin in third and Rich Folino in fourth. Maintaining his top five position throughout the day, Macvoy went on to finish fifth in the prefinal and again in the main event.

“I must extend a huge thank you to Gerald Casley Racing, Prime Powerteam, Ben Cooper Racing and AI Motorsport for their great effort this past weekend,” added Labrecque. “Next up for us will be the Briggs & Stratton National in New Castle, and then ROK the RIO and the SKUSA SuperNationals in November, where we will look to add even more titles to our 2019 tally!”

For more information to become part of the Birel ART or Ricciardo dealer network, or the PSL Karting Race Team and how to join them for your 2019 racing program, please contact Dominic@PSLKarting.com.