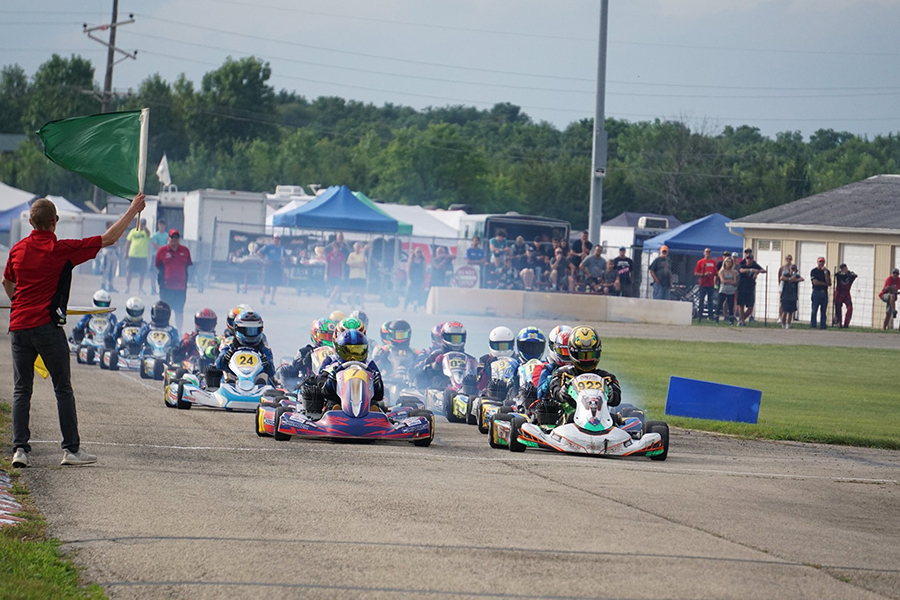 The 2019 season for the Route 66 Sprint Series – presented by MG Tires and Franklin Motorsports – is nearing the end. The penultimate event on the calendar was held on the August 16-18 weekend at the Concept Haulers Motor Speedway. The Norway, Illinois facility hosted Rounds Seven and Eight, with early rain hitting the area both racing days to start each round on wet tires before the track eventually dried out. Event sponsor DR Racing Kart Midwest hosted a cookout Saturday evening for all competitors, teams and guests. The racing saw a number of double winners on the weekend in the nine classes offered, setting up for the final championship chases. 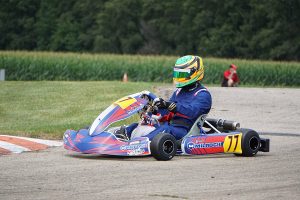 Stephen Dial bested the KA100 Senior field on Saturday for his first win of the season (Photo: Alissa Grim)

The two championship contenders in the Bromberek Racing KA100 Senior division were setting the tone to begin the weekend in Norway. Alexander Kardashian set fast time in the qualifying session to clear the 22-kart field by two tenths of a second. Three-time winner Josh Hotz ended the session in third, and took over in the Prefinal after Kardashian dropped out at the halfway point. Stephen Dial was fourth in the 10-lap run, and became the top challenger by the mid-point of the 16-lap Final. Dial, fresh off his first USPKS victory, took over the top spot, and led the remaining laps for his first Route victory of the season. Hotz was a close second, ending his win streak at three. Jeremy Fierke won the battle for the third spot on the podium, with Garrett Adams and Tristan Farber completed the top-five. Sunday was Kardashian’s triumph, scoring his first victory of the season. Adams set fast time in qualifying, while Kardashian was fourth. Kardashian led the final seven laps for the win in the Prefinal and fought off an early challenge from Hotz to lead the last 14 laps of the Final for the win. Dial was able to steal the second spot from Hotz with TJ Koyen fourth and Scott Kopp fifth in their series debuts for 2019. 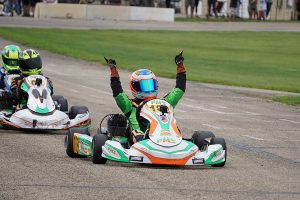 Nicholas Terlecki swept the main events on the weekend in BBS Technologies KA100 Junior class for his third and fourth victories of the season. Lucas Smalec set the pace in qualifying and won the Prefinal with Terlecki placing second in both. The two fought for the lead in the Final with Terlecki securing it at the halfway point, leading the remainder of the race for the victory. Smalec tried to edge out Terlecki at the line for the win, coming up 67 thousandths short. Zach Collins put in the fast lap of the race for the third spot on the podium ahead of Round Four winner Joshua Carlson and Keegan Bosch. Collins continued the quick pace on Sunday, setting the fast lap in qualifying but was pushed back to second in the Prefinal by Smalec. Terlecki was third, and quickly jumped to the point in the Final, leading the final 13 circuits for the victory. Smalec and Collins repeated their podium positions, including fast lap for Collins. Round Five winner Bryce Mersberger was fourth with Adam Maxwell placing fifth. 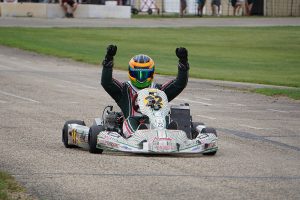 Dylan Gerding became the third different winner in the Merlin Nation X30 Senior class on the season. Gerding set fast time in qualifying with Hunter Peri winning the Prefinal. Gerding came out of the Final with the victory, two seconds ahead of Peri. Five-time winner Brandon Lemke added another victory, joining the action on Sunday. Peri set fast lap in qualifying before Lemke took over in the Prefinal and Final. Peri and Gerding completed the podium. Nathan Nicholson swept the weekend in Norway, extending his win total to five in the Woltjer Racing Engines X30 Junior class. Nicholson led Adam Maxwell in all six on-track sessions. 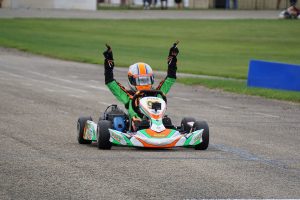 Cameron Brinkman doubled up his win total on the season, sweeping the main events in the Allison Racing Engines Mini Swift category. The days were near identical with Xander Reed setting fast time in qualifying both days. Brinkman was second in the session on Saturday, and took over the point quickly in the Prefinal en route to the win. Brinkman had to hold off Austin Jurs in the Final, edging him out for the victory by 53 thousandths. Ava Dobson set fast lap in the Final toward his third place result, with Reed fourth and Round Six winner Dane Sensel in fifth. Brinkman was fourth in the qualifying session on Sunday, behind Reed, Dobson and Aryton Grim. Brinkman jumped all three to score the win in the Prefinal, leading all 14 laps in the Final. Jurs and Dobson repeated their podium positions with Evan Zarbo and Grim completing the top-five. 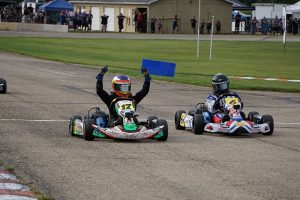 Two drivers added to their win totals on the season in One Powersports Micro Swift class. Indy Ragan grabbed his second victory of the year in Round Seven. USPKS champion Aryton Grim set fast time in qualifying in his final day in Micro before moving up to Mini on Sunday. Three-time winner Levi Copass came away with the win in the Prefinal, but in the end it was Ragan. Ava Hanssen jumped out to the lead in the Final, leading all but two laps. Copass took a turn at the midway point and Ragan waited for the final circuit when the order was shuffled up heading to the checkered flag. At the line, Ragan edged out Copass by 77 thousandths with Hanssen in third. Round Five winner Austin Olds was fourth with Grim fifth. Championships are about being consistent, and Copass has been that, earning a fourth victory at his fourth different track of the year. Sunday, Copass swept the action, setting fast time in qualifying and winning the Prefinal before securing the victory by leading only the final circuit. Hanssen was second with Ragan in third as Olds and Riley Andrusis completed the top-five. 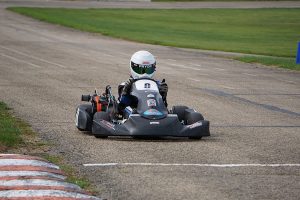 For the final two events of the Route 66 Sprint Series, the program has added the Briggs & Stratton 206 powerplant, offering Senior, Junior and Cadet divisions to complete the weekend schedule. Senior had two different winners on the weekend as Brian Rettig took home the victory Saturday ahead of Mick Gabriel and Ashley Graaf. Sunday was Gabriel and Rettig switching places, as Nick Ksoblech joined them in third. Junior was won both days by Carter Pryor. On Saturday, Prefinal winner Josh Fiene and Kayla Carlson stood on the podium while Sunday saw Loren Johnson and Charlie Mohr join Pryor on the steps. Kasey Williams swept the action all weekend in Cadet. Jase Petty and Luke Norris filled out the podium on Saturday with Norris up to second and JD Wright placing third on Sunday.