Ron White Racing to Double Down in Las Vegas This November 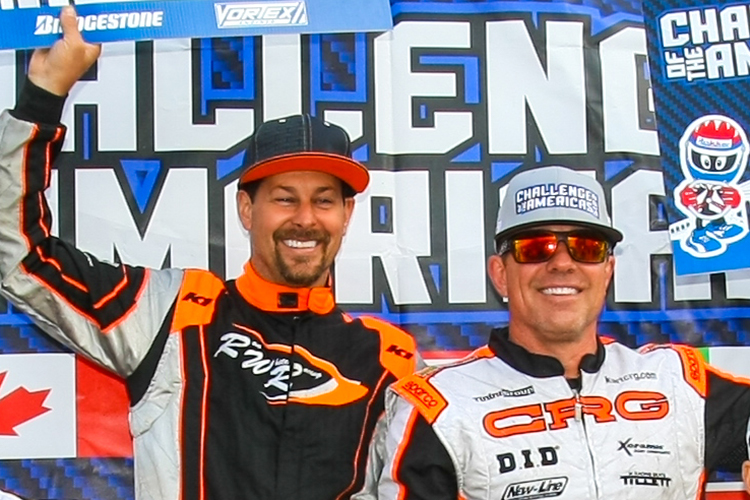 Ron White and Rod Clinard will represent Ron White Racing at the ROK Cup SuperFinal in Italy thanks to their championships at Challenge of the Americas this winter (Photo: ChallengeKarting.com)

The Ron White Racing operation continues to serve as one of the most successful and reputable karting teams in the Northern California region. The 2019 season has been another run of achievements and goal-reaching for drivers under the RWR banner. Looking ahead to the end of the 2019 season, Ron White Racing is set to provide full Arrive and Drive packages available aboard the world championship CRG brand for both ROK the RIO and Superkarts! USA SuperNationals 23. Both events are set for the Rio All-Suite Hotel & Casino in Las Vegas, two weeks apart, providing a stellar opportunity for karters to enjoy racing under the bright lights of the famed strip.

“The 2019 season has been another great year for us here at Ron White Racing and we hope to close it out with big victories and podium finishes in Vegas,” stated Ron White – 2003 SKUSA SuperNationals winner. “There is nothing like racing in Las Vegas, especially the Rio where we always have a great time and it brings back great memories.”

Ron White Racing has spent all season long competing at Challenge of the Americas and ROK Sonoma – two ROK Cup USA programs. White himself scored two victories in the six rounds of the COTA program to secure the Shifter ROK Senior championship while Texan Rod Clinard won three to earn the Shifter ROK Masters title. Mini ROK driver Anthony White contested his first season at COTA, finishing third in the point standings. Anthony is the championship leader at the ROK Sonoma program after five rounds, standing on the podium in each main event. RWR has seen Shifter ROK Masters drivers Kevin Woods and Patrick O’Neill each score wins on the year with Dakota White coming off her first victory of the season in Senior ROK.

“This is our second season working with the Vortex products and racing with ROK Cup USA,” added White. “We quickly got up to speed and our results this season have shown us to be among the best in the country. Either Shifter, ROK GP, or Cadet, we are putting drivers on top of the podium every weekend.”

White and Clinard, for their championships earned at Challenge of the Americas program, were awarded tickets to compete at the upcoming ROK Cup SuperFinal. Racers from all over the world will battle around the South Garda Karting circuit on October 8-12 in Lonato, Italy with full support of the CRG factory.

ROK the RIO is set for October 28-November 2, with the Ron White Racing operation returning two weeks later on November 20-24 for the 23rd running of the Superkarts! USA SuperNationals. For both events, Ron White Racing will have factory support from CRG and CRG Nordam on site for anyone needing assistance regarding their CRG kart.

Drivers interested in full Arrive and Drive packages for the event are encouraged to contact RWR quickly before spots fill up. Engines from RWR are also available for purchase or rent during the week.

Following the events in Las Vegas, team drivers and the general public will have the opportunity to purchase the one-race-old CRG chassis and ROK engines utilized during the event. Orders are being accepted now.

Ron White Racing continues to strengthen its reign among the top northern California kart shops and race teams. As the exclusive CRG distributor for area, RWR is looking to add dedicated dealers in the California region. For more information on Ron White Racing, please contact Ron White at 408-425-1102 or email ronwhite71@aol.com and find them on Facebook.

Ron White Racing is owned and operated by veteran driver Ron White. The White family has been in karting for over 30 years, beginning in the Northern California area before branching out to the national tours. Ron has competed in nearly every form of the sport, winning at every level. White has worked with numerous drivers throughout the NorCal region to help build their knowledge base both on and off the track, and is continuing to expand his reach to the national level. The RWR operation is focused on Challenge of the Americas, ROK Sonoma Karting Championship, the Superkarts! USA Pro Tour and selected events throughout California.