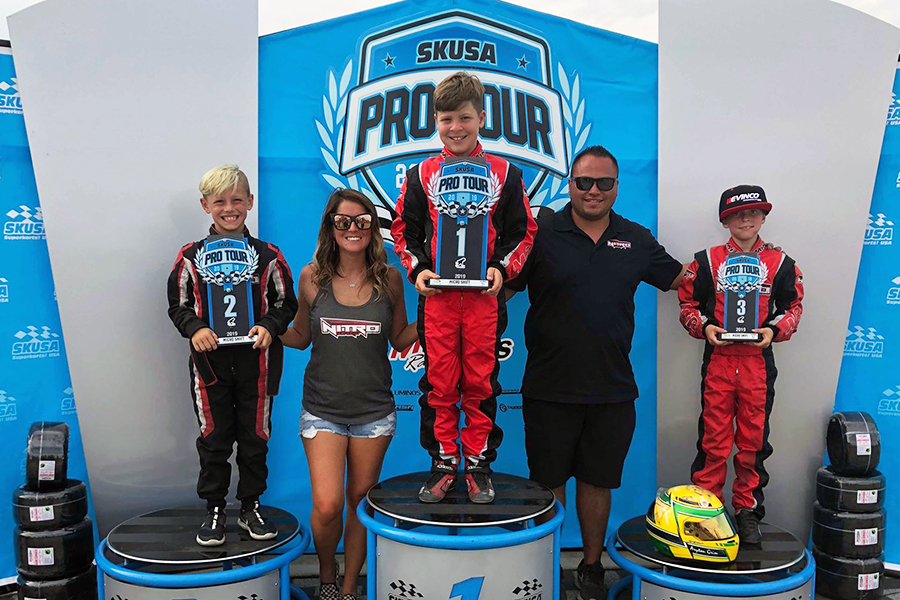 Following a great end to the United States Pro Kart Series campaign, Team Nitro Kart finished off a run of three-straight weekends at two different facilities with more victories and titles to their 2019 CV. The operation moved northeast to the Pittsburgh International Race Complex on August 2-4 for the Stars & Stripes Open Rotax event before returning back to the New Castle Motorsports Park on August 9-11 for the Superkarts! USA Pro Tour SummerNationals. Team Nitro Kart continued its dominance in the Cadet divisions, sweeping the two categories in Wampum, Pennsylvania before earning the two main event victories in the Micro Swift division in Indiana. 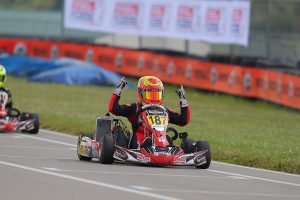 A full tent took on the Stars & Stripes Open Rotax event at Pitt Race, with tickets to the 2019 Rotax Max Challenge Grand Finals on the line for the top two finishers in the Mini Max and Micro Max divisions. For this event, each category utilized the same Mini Max engine package and competed in the same race group, however, all drivers were still designated into a specific class by their age. 2018 Rotax Grand Finals champion Brent Crews joined Nitro Kart once again, competing for the Mini Max title. Crews was among the top-two drivers through qualifying and the heat races until a mechanical issue put him on the sidelines. Crews was still able to start the Prefinal in fifth, and score the race win to hold the pole position for the main event. Crews was in a battle for the lead throughout the 16-lap Final, with hard contact sending him over on his head and out of the race.

His incident at the front of the field opened the door for Nitro Kart driver Cameron Weinberg. Fresh off his first USPKS victory, Weinberg crossed the line as the Mini Max winner, earning the ticket to the Rotax Grand Finals. Weinberg was the lone Mini Max driver in the top-five, with the other four drivers all in the Micro Max classification – and all four aboard a Nitro Kart. Adam Brickley led the Micro Max field across to the checkered flag with Ben Maier trailing to grab both Rotax Grand Finals tickets to Italy. Carson Weinberg completed the podium in third with Parker DeLong in fourth for the top-five sweep of the Mini/Micro race group.

“This is the third straight year we have sent at least one driver to the Rotax Grand Finals, winning what is considered to be the Grand Nationals for Rotax racing here in the United States,” stated Nitro Kart owner Nick Tucker. “While I’m upset with how Brent Crews’ race ended and his chance to go back to the Worlds, I’m happy he was able to walk away. He won twice with us in 2017 and 2018. It would have been awesome to three-peat with him. The rest of our team was there to back him up, and I couldn’t be happier for Cameron, Adam and Ben to represent Team Nitro Kart and the USA against the rest of the world in Italy.” 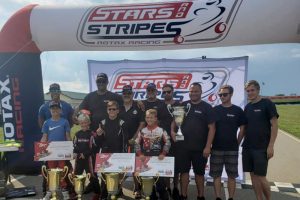 Following the celebration Sunday evening in Pittsburgh, the team packed up and took the hauler back to New Castle, Indiana for the final event of the Superkarts! USA Pro Tour. Team Nitro Kart had another solid weekend at New Castle Motorsports Park, nearly sweeping the entire event in Micro Swift. USPKS champion Aryton Grim and vice-champion Spencer Conrad made their 2019 debut at the SKUSA Pro Tour at the SummerNationals, each taking their first career SKUSA victories. The qualifying session on Saturday was the only time a Nitro Kart did not end the session in P1. Conrad won the Prefinal and led the field to the green flag in the main event. Grim was able to score the victory in the Final by a photo finish ahead of the eventual SKUSA Pro Tour champion and Conrad. Sunday was all Nitro Kart with Grim setting fast time in qualifying before Conrad scored the win in the Prefinal and Final. Carson Weinberg joined the fight to finish second in his SKUSA Pro Tour debut with Grim third, completing the podium sweep.

“Our Micro drivers have put in a lot of work and effort in 2019,” said Tucker. “They all are reaching the top level of their age group right now, and racing against one another each event has helped to elevate their talent behind the wheel. Coming off a sweep at the USPKS championship podium, it was great to come to the SKUSA SummerNationals and do the same thing on Sunday with Aryton, Spencer and Carson.”

Parker DeLong led the Mini Swift contingent of Team Nitro Kart, placing fourth on Saturday and third Sunday to secure the fourth position in the championship chase. Two-time SKUSA Pro Tour winner Sebastian Ng, fresh off a runner-up finish at the IAME Euro Series, had a high finish of fifth in Sunday’s main event to complete the series with four top-five finishes. Under the Team Nitro Kart tent for the weekend was 2017 World Karting Champion Danny Keirle racing in the X30 Senior division. The British driver ran to 11th in Saturday’s main event, visiting New Castle for the first time. On Sunday, Keirle was among the hard chargers in the Final, driving from 46th to 16th in the 51-driver field.

Tucker added, “It was a big asset for the kids to listen, watch and learn from a world champion. We look forward to more races together in the future where his talents and knowledge can continue to be passed down to our kids under the Nitro Kart tent.”