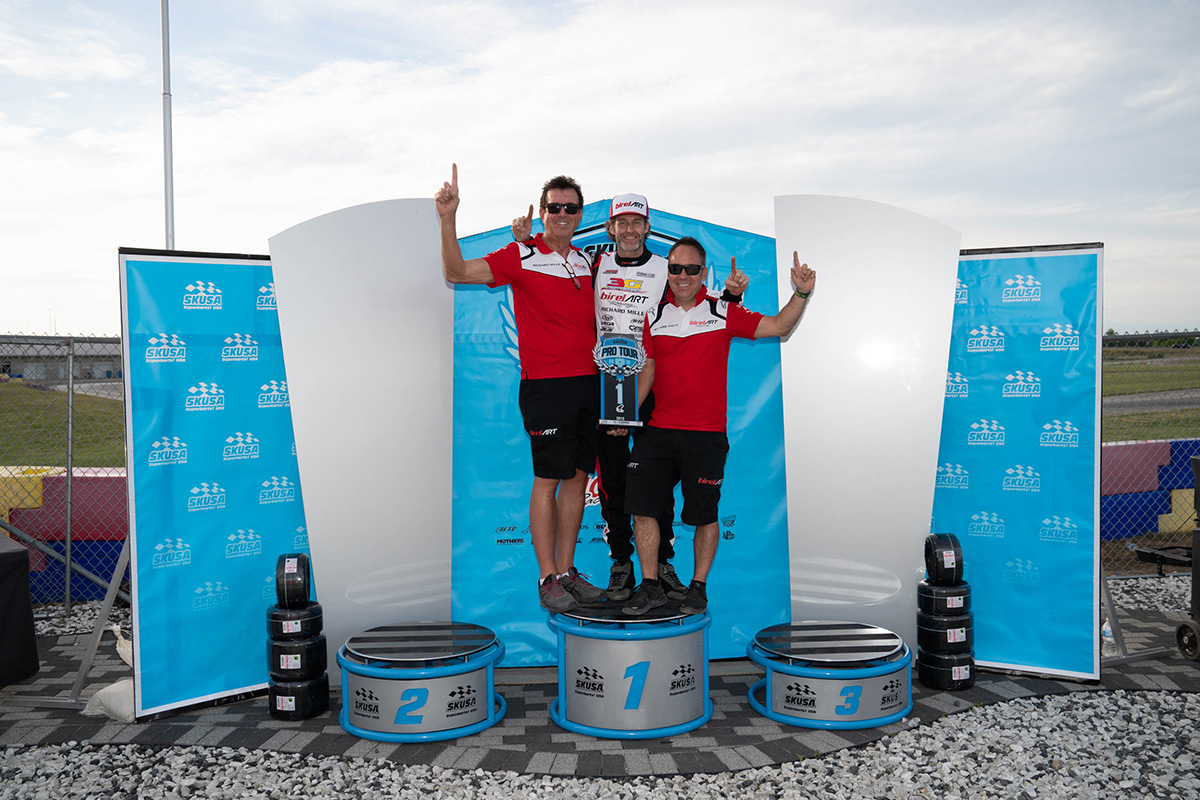 It was a perfect weekend weather wise for the final round of the Superkarts! USA (SKUSA) Pro Tour at the ultra-fast and challenging New Castle Motorsports Park (NCMP). With over 250 drivers in attendance and multiple BirelART drivers competing in several of the elite divisions, BirelART North America closed the weekend and the SKUSA Pro Tour with eight podiums, one championship and two vice championships. 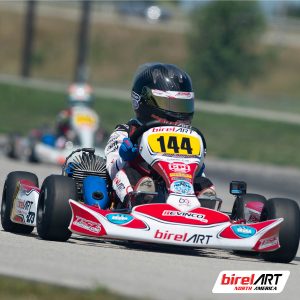 “It was a good weekend for our BirelART family but with a little luck, we could have had even better results,” explained Dominic Labrecque. “Our dealer programs are second to none and their drivers continue to provide results each and every race weekend. I can’t thank them enough, as well as their crew for all of their effort and support.”

It was a strong showing for the BirelART Mini Swift drivers as Jesus Vasquez Jr. took the pole position on Saturday morning. Perennial front-runner Caleb Gafrarar qualified fourth and leveled up in the prefinal to take the win and pole position for the main event. Looking to maintain his position and stand on the top step of the podium that afternoon, Gafrarar crossed the line in the second position and celebrated with his team during the podium ceremonies. Sunday saw different results for the two youngsters as Gafrarar was unable to position himself in the mid-morning qualifying session to clock tenth quickest, and moved up to P4 in the prefinal. The young gun was then subject to a DNF in the final after two drivers crashed in front of him leaving no where for him to go. Vasquez went on to secure a top-ten finish in the main event coming home ninth.

BirelART North America was victorious in the Masters Shifter G1 class as Jordan Musser turned his pole position into a main event victory on Saturday. Back to the track on Sunday, Musser qualified on the outside of the front row before being classified third after the prefinal. Maintaining his on track position for the main event, Jordan Musser garnered enough points to be named the 2019 SKUSA Pro Tour Masters Shifter Champion, the fourth championship title in a row for the potent Musser and BirelART North America. Fellow BirelART teammate Ryan Kinnear matched pace with Musser throughout the weekend as the duo duked it out for podium results. Kinnear qualified third on Saturday and made it a BirelART 1 – 2 with his second place result in the main event. Sunday saw Kinnear on top in the morning qualifying session before closing his Pro Tour with an additional second place result. In the Masters Shifter G2 category it was Eric Chapell who put his BirelART chassis in the top-five. Qualifying fourth on both Saturday and Sunday, Chapell garnered a fifth place result in Saturday’s main event.

In the X30 Senior class it was Thomas Nepveu who showed great pace qualifying in the top-ten Saturday and finishing the prefinal in fifth. Looking to make a bid for a podium result in the day’s main event, Nepveu worked his way to third before an engine failure forced him to the sidelines. In X30 Masters Vatache Tatikian qualified P3 on Saturday and come the end of the race Sunday, found himself on the third and final step of the podium to end his Pro Tour on a high. 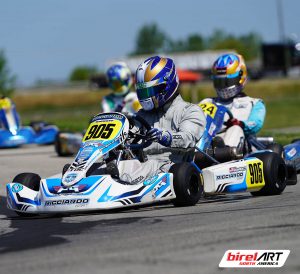 Four top-ten results came from two drivers in the Pro Shifter class as Mathias Ramirez and David Greco had a consistent weekend of running. Ramirez qualified seventh on Saturday but was forced to start the day’s main event from the tail of the field. Driving his way forward, the young Floridian finished seventh in the main event. Sunday saw another seventh place effort in qualifying before finish eighth in the final. Greco was able to improve from his qualifying efforts both Saturday and Sunday to finish tenth during both days of wheel-to-wheel action.

Two additional weekend podiums came from the hands of Nick Ramirez as he battled hard at the front of the KA100 Senior ranks. After qualifying fourth on Saturday, Ramirez scored the fastest lap of the day’s main event en route to his second place result. Sunday saw Ramirez improve from his fifth place qualifying run to stand on the podium in third, securing enough points to be named the KA100 Senior Vice Champion.

Labrecque continued, “With the Pro Tour now complete, we now shift our SKUSA focus to the annual SuperNationals in Las Vegas. With several opportunities for arrive and drive as well as chassis rental programs through one of our many dealers, the time is now to get organized and prepared for North America’s largest karting event.”