Toronto’s Daniel Demaras is racing to meet a fundraising goal 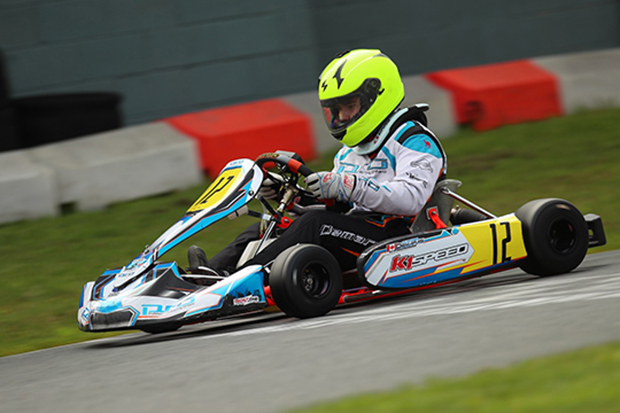 Demaras is currently competing in his second season in Briggs & Stratton Senior, the top four-stroke karting class in TRAK (Toronto Racing Association of Karters). The young talent got his start in 2014, where he competed as a Cadet in the CRKC (Canadian Rookie Karting Championship). After three years and over 20 race wins in that series, Demaras made the jump to club racing with TRAK in 2017. Since then, he has been consistently competitive with a number of top-ten and top-five finishes.

Raising $1500 for Racing to End Alzheimer’s is a new kind of finish line for Demaras. His goal is to raise the money by September 14, when he hosts another fundraiser at local karting track K1 Speed. All of the money he raises will be donated to Baycrest Foundation in Toronto.

“I read on their website that Racing to End Alzheimer’s has a 2019 fundraising goal of $150,000, and I wanted to show that one person can make a difference, so I decided to try and raise one percent of that goal myself, $1,500,” says Demaras.

The alliance between Racing to End Alzheimer’s and Demaras came about through James Vance. He and Nick Galante co-drive the #23 FastMD/Legistics/FEL Audi RS3in the IMSA Michelin Pilot Challenge Series. Last year, PRO invited Vance to the local karting track to coach aspiring racers. Fast forward to this year, when Demaras and Vance met again during the IMSA race at Canadian Tire Motorsport Park.

“When I saw the Racing to End Alzheimer’s logo on the race car, I realized he was involved in something special,” Demaras explains. “I reached out to James and explained that I wanted to team up with Racing to End Alzheimer’s. At the IMSA race at Canadian Tire Motorsports Park last month, he introduced me to founder Phil Frengs, who welcomed me to the team.”

Frengs founded Racing to End Alzheimer’s in 2017 after his wife Mimi was diagnosed with early-onset Alzheimer’s. Both Frengs and Demaras have seen the effects of Alzheimer’s within their own families.

“It’s rewarding to see our efforts to increase Alzheimer’s awareness, to fund the care and to fund the cure advanced by such a young racer,” says Frengs. “I’m a big supporter of Daniel and his initiative, and it shows that having a loved one affected by Alzheimer’s touches people of all ages.”

Demaras kicked of his fundraising during an appearance at Toronto’s Nostalgia Coffee Company, one of his sponsors. Thanks to the generosity of fans and patrons, Demaras raised $645—more than one-third of his goal in just a single afternoon.

Supporters can help Demaras reach his goal by donating at r2endalz.org/demaras. Racing to End Alzheimer’s gives 100% of its contributions to Alzheimer’s-related organizations. You can learn more about Daniel Demaras at demaras.com.

ABOUT RACING TO END ALZHEIMER’S

Racing to End Alzheimer’s was founded in 2017 by Phil Frengs. His company, Legistics, is a longtime motorsports sponsor, but when Phil’s wife Mimi was diagnosed with early-onset Alzheimer’s, he realized that a race car could be an effective fundraising platform if he covered it with names of dementia victims, instead of just company logos. The first year, Racing to End Alzheimer’s raised $43,500. The donations more than doubled in 2018, totaling over $100,000. Each year, 100% of the proceeds are donated. Previous recipients were The Cognitive Health Clinic at the UCLA Medical Center and the Nantz National Alzheimer Center at Houston Methodist Hospital. Learn more about Racing to End Alzheimer’s or donate to remember your loved one on their website.