EKN’s Paddock Insider is part of our Trackside coverage, bringing you notes, updates and breaking news as it happens. The article will feature notes from trackside at the 2019 Superkarts! USA Pro Tour SummerNationals, which is being held this weekend at New Castle Motorsports Park in New Castle, IN. This is insider info will not be seen anywhere else. Please feel free to comment and discuss our coverage and today’s action in the EKN Global Members Discussion area below. Make sure to tune in all weekend long to the live audio and live timing at eKartingNews.com/live

The weather is as good as anyone could hope for Indiana in August. The ambient temp as we head to the noon hour is set in the mid-70s with a forecasted high of 81. To no one’s surprise, the humidity level is 57% but there is not a cloud in the sky for today’s official practice sessions. The weatherman is calling for warmer temps on the weekend, but the forecasted high is still only in the mid-80s. 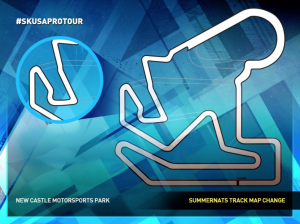 Heading into the race, the feedback on the new track configuration being run by SKUSA was mixed. Many were vocal that the initial track would not be technical enough, but SKUSA addressed those concerns by adding back in the complex of corners that were normally tabbed as Turns 5-10, including the Turn 8 hairpin. The feedback from the drivers we spoke with this morning was primarily positive, focusing on the fact that the ‘ski jump’ section of the new layout is incredibly technical and will separate the field as a result. The massive length of the extended configuration will drop the number of laps significantly, as the lap times for the Pro Shifter classes have been increased by around 10 seconds, increasing to the 1:12 range after being 1:02s in years past.

SKUSA is presenting complimentary post-race dinners both tonight and on Saturday evening courtesy of Ruthless Motorsports, Woltjer Racing Engines, Nash Motorsportz, Trinity Karting Group and the Rolison Performance Group. Tonight’s dinner will be cooked by a local Cub Scout group and will feature BBQ, while Saturday night is Taco Night!!

Big news from yesterday involves a paddock accident for a top Junior driver. EKN has learned that Luca Mars broke his arm while playing on a Razor scooter, and he is having surgery today to repair the damage. This is certainly a big blow to Luca’s 2019 racing program and could shelve him for the remainder of the season. We all hear the repeated demands by series, tracks and clubs to have zero vehicles ridden in the paddock, and this terrible news will hopefully be a reminder of the dangers that are inherent in these vehicles. Accidents can happen on any vehicle, but it’s certainly preventable when considering the effect it can have on a racing program.

Multi-time SKUSA Pro Tour winner, and current Road to Indy Cooper Tires USF2000 Championship point leader Braden Eves is back on the track this weekend, again racing with Crosslink Competition aboard an Exprit. Veteran mechanic John Russell is turning the wrenches for the New Albany, Ohio driver, who is on a break from his car racing program until he returns to his Cape Motorsports ride on Labor Day weekend at the Portland Grand Prix. 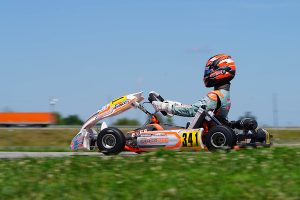 In speaking with veteran team owner Mike Rolison, he expects the ‘ski jump’ section to be an area of interest all weekend long. It’s definitely a challenging part of the track and he expects to see chaos there deeper in the fields, especially during the opening laps. Rolison’s RPG team was at New Castle last weekend for the SKUSA Great Lakes ProKart Challenge finale, and he commented that the grip levels are not as high as they were in year’s past. Mike pointed to several factors playing to this fact, namely the harder tire in the X30 Junior category and the addition of the KA100 Junior and Senior classes, which are also on harder tires. The lower numbers of shifter and X30 Senior entries are also playing a role. He also reminded us that he rained heavily on the Monday following the SKUSA Great Lakes PKC race, which essentially washed away much of the rubber and pressed the reset button on grip for this weekend. We’ll keep an eye on this story.

We spotted multi-time world champion Davide Fore in the paddock today. Chatting briefly with the legend before firing up our EKN Live broadcast , Davide let us know that he’s working with Supertune USA this weekend.

In talking to a couple of drivers in the SSE Shifter classes, the Start-Finish line could be an issue during qualifying and in any close finishes. With the significant top-speed of the 175cc packages and the braking capabilities of a shifterkart, the Start-Finish line at New Castle is positions after the braking initiation into Turn 1, which will require drivers go ‘send it’ into a corner if they think they’re on a flyer. The same goes for a run to the line for the checkered, after which we expect to see more than a few drivers struggling to make the next corner.