Shifters and Masters titles up for grabs in New Castle 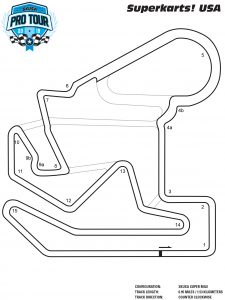 The 10th chapter of the Superkarts! USA Pro Tour will see its final pages written this weekend as the series finale is set for the New Castle Motorsport Park. The New Castle, Indiana facility will play host for the 10th SKUSA SummerNationals, as the 2019 edition marks the fifth straight year that the Mark Dismore-owned facility welcomes SKUSA competitors, becoming the Midwest home for the organization. It’s also the third year in a row that SKUSA has capped the Pro Tour at the popular track, as the first seven seasons of the national series wrapped at the SuperNationals in Las Vegas.

eKartingNews.com is proud to continue as the official online partner for the SKUSA Pro Tour, having broadcast every race since its inception. Those karting enthusiasts not in attendance can listen from home or on the road through the EKN Live broadcast page at www.ekartingnews.com/live with EKN’s own Rob Howden providing the play-by-play call. This weekend’s broadcast is brought to you by Mad Old Nut Racing, Rolison Performance Group and KartLift Kart Stands. Daily reports and updates on the EKN Social Media network will fill up your timeline throughout the weekend.

Rain shuffled things for the opening rounds of the SKUSA Pro Tour at the WinterNationals in southern California in March. Fast forward to May, and all the racing was completed before storms rolled into the Utah Motorsports Campus for the SpringNationals, as another exciting doubleheader of racing was put into the history books. Now, competitors find themselves with a bit of unknown as the New Castle Motorsports Park is opening up the extended ‘Iron Man’ course, rather than the ‘national course’ that had been utilized the past four SummerNationals at NCMP. The SKUSA Great Lakes ProKart Challenge opened the season with the configuration, and closed out the 2019 season last weekend with the final two rounds of the championship. The weekend provided a number of SKUSA Pro Tour competitors the opportunity to learn the layout in preparation for this weekend. Now we wait to see if the extra time will pay off when the final championship points are calculated on Sunday evening. 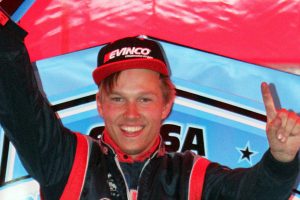 It never fails to see a number of drivers in contention for the headline shifterkart title on the SKUSA Pro Tour. Many of the previous nine championships were decided in the final laps or even the final corners. Andrew Bujdoso is searching to be the ninth name added to the list of SKUSA champions, heading into the SummerNationals leading the Pro Shifter standings. Bujdoso was set to make his SKUSA debut aboard the Solo Kart after opening up the season with two wins in four rounds with Croc Promotions USA, but we have learned that he and the emerging US operation parted ways earlier this week. Bujdoso will be running under his family’s Checkered Motorsports banner this weekend, and Andrew told us on Tuesday evening that he will still test his Solo Kart in pre-event running on Thursday. He also stated that there is an option for him to jump into an “Italian special” tabbed as a CM Kart, if needed. This is obviously a developing story that we’ll follow all weekend.

Bujdoso has a slim 15-point lead going into the weekend over defending champion AJ Myers. The Florida driver benefitted last year with a victory in the final round to clinch the 2018 SKUSA Pro Tour title. Myers came into 2018 finale trailing in the point standings, and has the deficit once again, although this time with a lesser margin to make up. The battle for the title this year includes three drivers, as AJ’s CRG Nordam teammate Kyle Wick is right there, just 10 points back of Myers and only 25 out of the overall lead. Wick has yet to score victory in 2019, and a win or two in New Castle could be the ticket to his first SKUSA Pro Tour title. 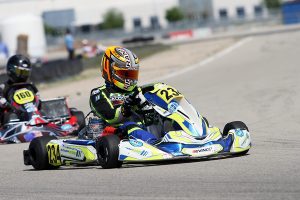 The title chase in the Pro Shifter 2 category is a two-driver duel. Race Liberante (J3 / CompKart) has proven to be the quickest throughout the season, earning two victories. Two DNF finishes for the recent Battle at the Brickyard winner in the other main events on the Pro Tour have cost him valuable points in the title chase, allowing Max Hewitt (CRG Nordam) the chance to claim the upset. Hewitt has three podium finishes, including a win on Sunday at the WinterNationals. New Castle was Max’s breakout weekend last year, winning his first SKUSA Pro Tour victory.

Calvin Ming (MRC / Aluminos) and Connor Robles (MRC / Aluminos) have a great battle going for the SKUSA #3 plate in the point standings, with Anthony Freese (PSL / Birel ART) and Round Four winner Mark Snyder (SBR / Formula K) with the opportunity to close up with a solid final weekend. Dalton Egger (RPG / Kosmic) and 2018 Quincy Grand Prix victor Joe Ruch (FA / DR Kart) are among those that can play spoiler on the weekend. 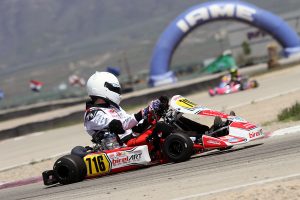 Jordon Musser is on the verge of a fourth career SKUSA Pro Tour championship if he comes out of New Castle with the G1 title (Photo: EKN)

The SKUSA record books could be re-written after the SummerNationals weekend, welcoming a first four-time champion on the SKUSA Pro Tour. Jordon Musser (PSL / Birel ART) has three SKUSA titles to his already massive CV, and enters the weekend with a solid lead in the G1 standings. Musser has won every on-track session, with the exception of qualifying in Round Four. John Crow (MRC / Croc Promotion) has put up a valiant effort against Musser, and trails by 170 points in the standings. The two will be fighting for points while former SKUSA Pro Tour champion Ryan Kinnear (PGR / Ricciardo) is set to make his G1 debut in 2019. Kinnear could be the wedge that helps Crow back into the championship door, or further help Musser grab that fourth title.

The G2 category makes its SKUSA Pro Tour debut, as the ‘Super Master’ division utilizing the IAME SSE 175cc engine. S4 drivers Brett Harrelson (Nash / CRG) and Ken Schilling (Aluminos) have made the move over, and will welcome Eric Chappell (Birel ART) back to SKUSA competition in the class debut. 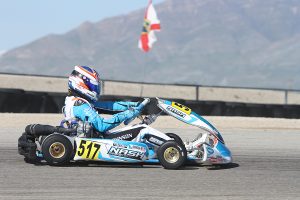 Matt Johnson is in the driver’s seat for the X30 Master crown (Photo: EKN)

Three drivers sit within 104 points at the top of the X30 Master standings. Matt Johnson (Nash / FA Kart) is coming off a dominating weekend at the SpringNationals to lead the championship into New Castle thanks to a perfect score in Utah. Not far off is SKUSA #3 plate holder Jess Peterson (PGR / Ricciardo) with four straight podium finishes, yet no wins. Throw in Round One victor Vatche Tatikian (PGR / Ricciardo) and the title chase may come down to the wire. The battle would have included four drivers, however, two-time SKUSA Pro Tour champion Derek Wang (Crosslink / Tony Kart) will be sitting out the event after injuring his ribs recently.

A number of drivers are looking to spoil things with either a win or podium finish. Billy Lewis (MDR / Kosmic) has likely the most laps of anyone in the field at New Castle, with the NCMP native ready to make his SKUSA Pro Tour debut in the category. Adam Pettit (Solo Kart) was quick during the USPKS event two weeks ago, and Brett Harrelson (Nash / FA Kart) is making his Pro Tour debut in the class after wins at LAKC in the last few rounds. Last but not least, former SuperNats winner Renato David (Orsolon / Tony Kart) is making his first start of 2019. 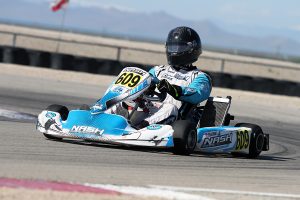 The gap is 100 points for the top two drivers in the X30 Super Master standings. Jon Persing (Nash / FA Kart) put himself in the lead with a perfect score and swept of the SpringNationals in Utah. Round One winner Steve Martin (DMG / Tony Kart) has his work cut out for him, needing a weekend sweep of his own for a chance at the title. East coast driver John Bonanno (J3 / CompKart) could help or hurt Martin’s chances depending on how the weekend unfolds in New Castle, along with the veteran Carapellatti brothers, who were among the top-10 all season in USPKS competition.