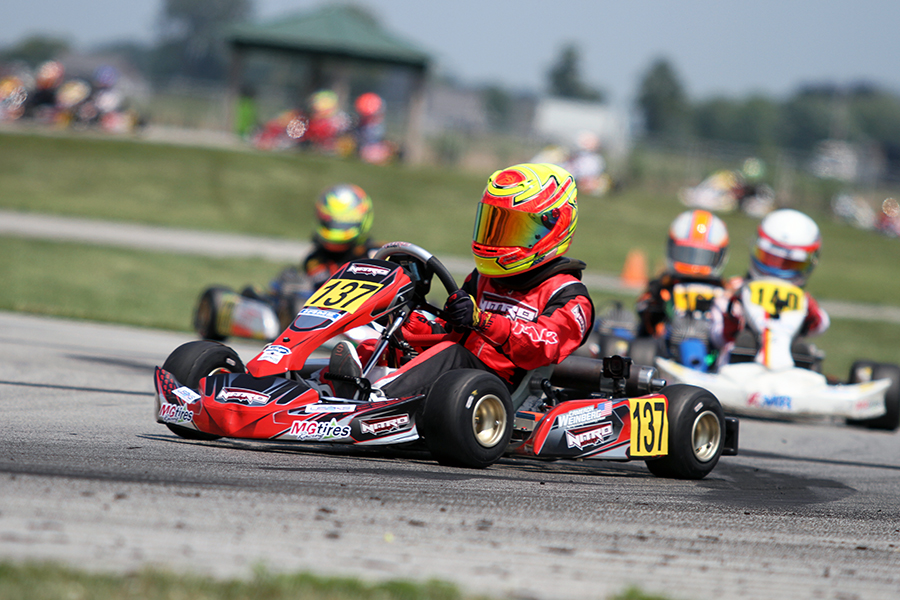 The Nitro Kart race team began a busy stretch of racing to conclude the summer, with the 2019 United States Pro Kart Series finale first on the docket. The New Castle Motorsports Park in central Indiana hosted the Hoosier State Grand Prix, which served as Rounds Five and Six of the championship chase. Team Nitro Kart was locked and loaded with a number of drivers in multiple categories for the weekend, with their results helping the operation to retain the series ‘Geo Cup’ as well as a second-straight Micro Swift class championship. 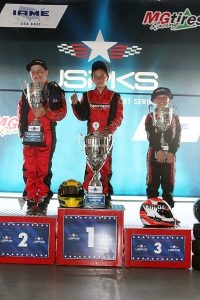 The weekend was highlighted by three victories by Nitro Kart drivers. Cameron Weinberg had his best results of the USPKS program in the Mini Swift category. Showing speed early, Weinberg was able to be there at the end in Saturday’s main event, coming out as the victor for his first career USPKS main event win. Cameron followed it up with a fourth place result on Sunday, boosting himself into the fourth position in the final championship standings as the top finishing Nitro Kart driver.

Micro Swift driver Aryton Grim came into the weekend with one victory and the lead in the championship chase. Grim performed the best he had all season on the weekend, placing inside the top-three in every session as he needed to in order for the title run to go his direction. What made the championship even easier to swing his way were the two victories on the weekend. Grim was able to record photo-finish wins on Saturday and Sunday. The first was a margin of only one thousandths of a second, while the Round Six triumph saw Grim reach the line first by five hundredths. Those two wins clinched the title for Grim, gaining his first major championship.

The Nitro Kart chassis swept the top three positions in the Micro Swift point standings. Spencer Conrad recorded three wins of his own in USPKS competition, placing runner-up to Grim in both main events at New Castle to end the season vice-champion. Carson Weinberg battle back from a hard wreck in Saturday’s main event to place third on Sunday, advancing him to the third position in the point standings to give Nitro Kart the sweep.

Outside of the Cadet divisions, Team Nitro Kart gained respectable results. Hayden Jones gave Nitro Kart a main event pole position in the X30 Junior on Saturday after winning the Prefinal. A wreck in the Final cost Jones a possible podium finish, but he came back on Sunday to finish sixth. Emory Lyda piloted his Nitro Kart chassis to top-10 results in the competitive KA100 Senior division in New Castle, locking up the fourth position in the championship standings. 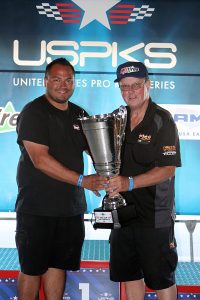 All of Team Nitro Kart provided points throughout the season for the operation in the second-year of the Geo Cup standings. The trophy program awards points to the teams of the top-three finishers in each class, with the team recording the highest total on the year awarded the trophy named after industry veteran George Sieracki. After winning last year, Team Nitro Kart retained the trophy with the highest point total of the 2019 season.

“It was a great finish to our 2019 USPKS campaign,” stated Nick Tucker, owner of Nitro Kart. “I’m very excited for Cameron to get that first big victory and our Micro Swift crew for sweeping the championship podium. Our drivers, parents, mechanics and coaches put in a lot of work throughout the three weekends and beyond to help put us on top once again. I can’t thank them all enough for the dedication, hard work and fun throughout the series. We have more work ahead and I see more victories and championships coming to Nitro Kart as we close out 2019.”