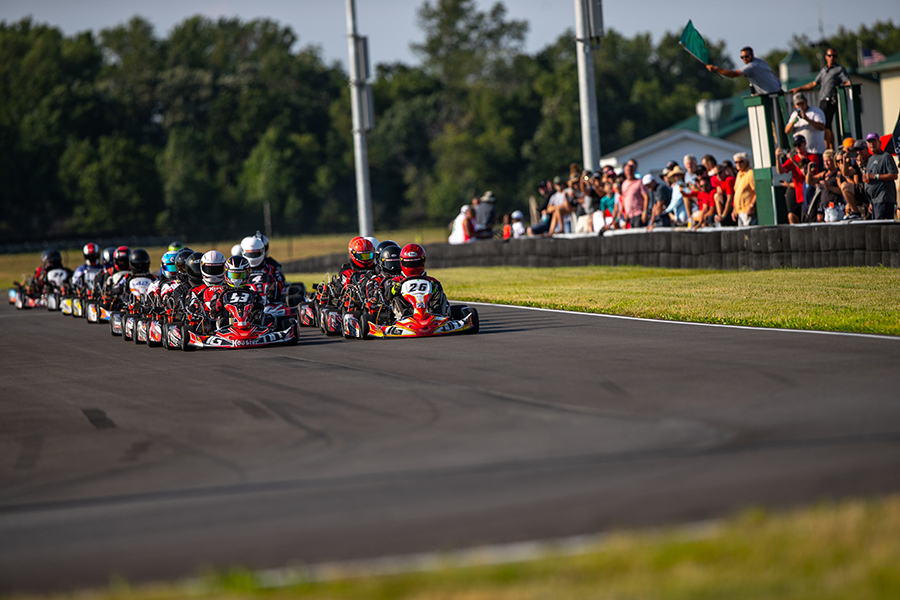 The third round of the Ignite Challenge Series returned to the Autobahn Kart Circuit at Autobahn Country Club in Joliet, IL as the first major event at the renovated track. The new surface, added elevation change and extended layout made for a challenging and demanding circuit that rated very high within the paddock. The series reached record entries for a single event with the highest attended class being Ignite Senior at (27) entries.

The Ignite Rookie class received record entries at the Autobahn Kart Circuit. In qualifying, Isaac Wells would take pole with the top-3 under a blanket in times. On the start of feature one, Lane Mayer would get the jump from third place to quickly move into second over Louis Palmisano. Palmisano and Mayer would spend the remainder of the race battling hard for second allowing Wells to pull a 7-second gap for the feature win. Mayer would cross the line in second with Palmisano right on his tail. Wells would set the fastest lap in feature one putting him on pole position in feature two. After a disastrous start, Wells would move back to sixth place after the first corner with Mayer navigating through the carnage for the lead. Palmisano followed Mayer throughout the race but was not able to get through lapped traffic as well in the later stages. Although not the fastest, smart driving presented Mayer with the feature 2 win. Palmisano would take second and Wells would drive into an impressive comeback awarding him the final step on the podium.

Points leader, Reid Sweeney, would start the day off quickly setting the pole time over the field by 0.3 seconds. On the start of feature one, Trevor Eggemeyer would get the better start and edge Sweeney through the first lap. Sweeney would work with Eggemeyer until lap five when Sweeney complete the pass into turn one. Sweeney would hold on and take the feature one victory with Eggemeyer 4 seconds behind. Mitch Graybeal would come from a fifth place starting position and move his way up to third. In feature two, Sweeney would get the jump while Carlson, Eggemeyer and others would tangle in a turn one incident. This allowed Sweeney to gap the field and take his sixth win of the season. Christian Weir and Joey Kall would cross the line in second and third, completing the podium.

In Ignite Senior qualifying, Hunter Richardson beat out points leader Evan Stamer by 0.048 seconds. In the first feature, Stamer and Richardson would work together to gap the field. After securing a safe distance, Richardson would make the move on Stamer into turn two of the final lap taking the point. Richardson would hold onto the lead and beat Stamer at the line by 0.094 seconds. Chubb would win the battle for the final podium position over Autobahn Ignite Series points leader Jordan Missig. In the second feature, Justin Vancil from the outside pull would get the better start and beat the field into turn one. Vancil would hold the lead until the fourth lap where Richardson and Stamer would work their way past him into turns one and two. The pair of drivers would once again work to gap the field. This time it was Stamer who would make the move on Richardson with one lap to go. As a last-ditch effort, Richardson would make a forceful pass on Stamer into the final corner as the two drivers traded contact heading to the finish. Richardson would take the win by less than 0.000, marking what could have been the closest margin of victory in history. Race control deemed Richardson’s pass attempt as aggressive which bumped him back to second place. Meanwhile, Vancil was able to hold off the hungry pack and complete the podium.

Last year’s podium finisher, James Newbold, would secure the Ignite Masters pole position over Indianapolis champion, Keith Scharf, in qualifying. At the start of the first feature, Newbold would run into issues with a cut valve stem allowing Scharf to take the point. With Mike Long, Brandin Moore and Ken Williams battling hard for the second position it would allow Scharf to easily take the win. Long and Williams would complete the podium for the first feature. After setting fast time, Brandin Moore would take the pole for the second feature. Moore got shuffled back to first on the start giving the lead to Mike Long. Long and Williams would pair together to gap the field setting Williams up for the pass on the final lap. Williams was able to get the job done at the line beating out Long by 0.025 seconds. James Newbold was able to rebound from a poor finish in the first feature to achieve the final podium position.

In qualifying, Josh Holt was the “fast cat” setting the pole time 0.2 seconds ahead of Craig Loddeke. It was Loddeke who showed prowess in both features over Holt, taking double feature wins. Hold would sit at the second step of the podium with both Rich Fasching and Mark Gergen trading the final podium positions.