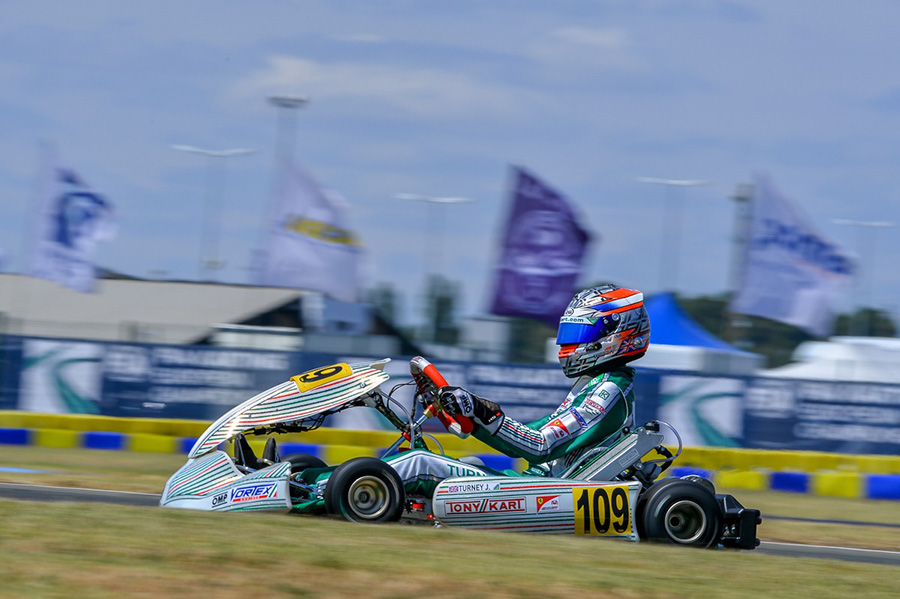 The Tony Kart Racing Team drivers express themselves at best on the track in Le Mans during the last round of the OK and OKJ European Championship, always fighting for the very first positions.

The fourth and decisive round of the OK and OKJ FIA Karting European Championship came to an end on the circuit in Le Mans, France. The drivers of the Tony Kart Racing Team fought hard, being the authors of important performances with the Tony Kart Racer 401 R chassis powered by Vortex, always effective even under variable weather conditions.

Among our OK drivers, Joseph Turney is the star of a top weekend. In the final, he crossed the finishing line firmly in second place, after a great comeback from the tenth box conquered thanks to 2 victories in the heats and a second place, balancing an unlucky withdrawal. Unfortunately, a penalty after the race forces him to step down onto the podium, with all due respect to his great performance throughout the weekend at the wheel of our chassis.

Excellent performances also for Sebastian Montoya, convincing since the qualifying on Friday. A third and two fifth places conquered with great tenacity in the heats anticipate the great tenth position reached in the final, his best result of the whole season.

Matheus Morgatto ends his European with good performances too: he gains access to the final thanks to a second place in the Heats and, even if he was starting in the backlines, he takes full advantage of the OTK material to recover up to 12 positions, before being penalized with 5 seconds in the post-race.

Little luck, instead, for Noah Milell in the final, who can drive just a few bends, after having been firmly in top ten in the heats.

With the Tony Kart-Vortex duo, the Ward Racing team drivers Dino Beganovic and Kirill Smal are also standing out, winning three and two first places in the heats respectively, and two best laps for Beganovic.

In OKJ, our Alex Dunne and Nikita Bedrin are always among the very first drivers. Dunne, especially, after a contact in the first round, centers a first, a second, a third and a fourth place; while Nikita, with a second and fifth place, is still in the running for an important position in the championship.

Both are getting to the final without being discouraged from starting outside the top ten, aware of the potential of our Tony Kart Racer 401 R and the Vortex engine.

Also Josep Maria Martì is the author of great performances. Due to a penalty, he is forced to start from the last position in the heats, however, he manages to gain a tenth and a seventh place in the rain, in a heat where he overtakes twenty opponents. After winning the final, he also complete another great race in which he recovers eleven positions.

The Tony Kart Racing Team will now have a short period off to prepare and train to be in the best condition for the most important race meeting of the whole season: the FIA Karting World Championship, starting in Alahärmä, Finland, on the weekend from 5th to 8th September.