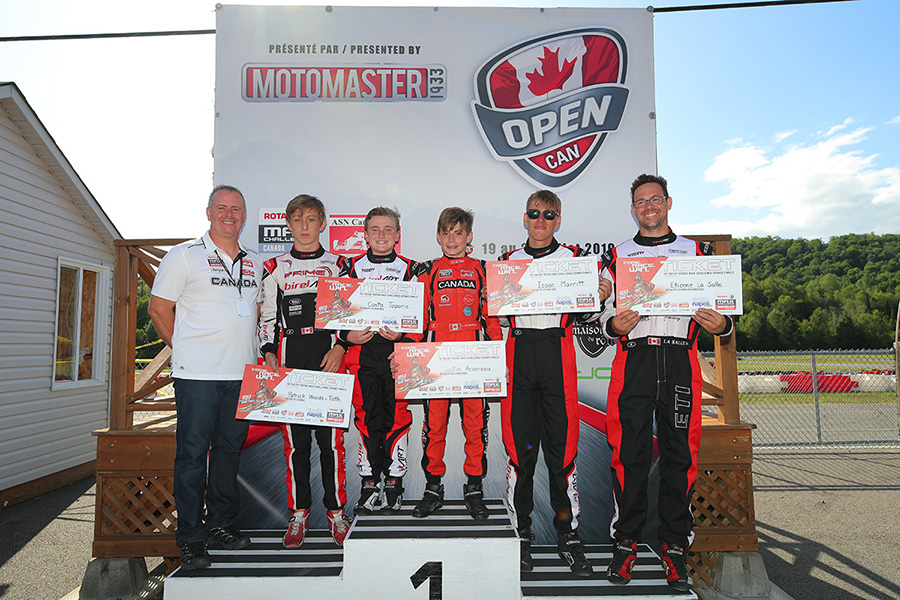 It was a dominating weekend for the Birel ART product line at the Rotax Canadian Open this past weekend as the popular karting brand racked up an astonishing seven wins and nineteen podiums at the Jim Russell Academy facility in Mont-Tremblant. Dubbed the ‘Red Army,’ Birel ART drivers were out in full force and led the way in multiple Rotax and Briggs & Stratton powered classes.

“It is really nice to get back to some Rotax racing,” explained Dominic Labrecque. “This engine platform was such a major part of karting in North America for a very long time and to go back with great success shows how adaptive our crew and drivers are.”

It was a top-five sweep in the combined Rotax Micro / Mini Max division led by Costa Toparis. Toparis outdueled American frontrunner Caleb Gafrarar to take the win as Frankie Esposito claimed the third step on the podium. Not to be outdone and to make it a top-five sweep, Oscar Wurz and Ashton Henckel rounded out the top-five.

It was four Birel ART drivers in the top-five in the Rotax DD2 category as Davide Greco led the way. Greco scored the race win just ahead of fellow Birel ART driver Isaac Marritt in second with Christophe Rizk and Alexandre Lavoie rounding out the top-five. Sweeping the two-speed category, Birel ART also secured the top step of the podium in Rotax DD2 Masters with Christophe Adams. Adams led a top-five sweep for the Red Army as Etienne LaSalle, Alexandre Gauthier, Nathan Mauel and Fabio Casanova finished second through fifth.

In the Open Shifter class, it looked to be Cooper Becklin’s day as a pole position run in the morning turned into a dominant prefinal win and the fastest lap by eight tenths of a second. Unfortunately, an incident in the final took him out of contention but the first time shifter driver turned heads in his class debut. At the end of the day, Dominic Legrand stood on the third step of the podium while Henry Knox and Xingran Tang finished fourth and fifth. Victory would come from the Open Shifter Masters class as Christian Gysi led the way in a podium sweep. Michel Legrand ended his day with a second place result while Thierry St-Onge completed the podium trio.

Three Briggs & Stratton classes would also compete at the Canadian Open and Birel ART drivers were victorious in two of them. Aaron Kennedy led the podium sweep in the Senior class ahead of Tyler Mcculough and Kelsey Hann while Alex Murphy ended his day in fourth. The Masters class was won by Daniel Courtemanche as he and Mathieu Demers led the way in a 1 – 2 BirelART finish. Isaac Teed scored the best result for the Red Army in Briggs & Stratton Junior in third while Owen Mahar followed closely in fourth.

Labrecque continued, “Another big shout out and thank you to our drivers, mechanics, dealers and supporters. Without their hard work and dedication, we could not be as successful.”