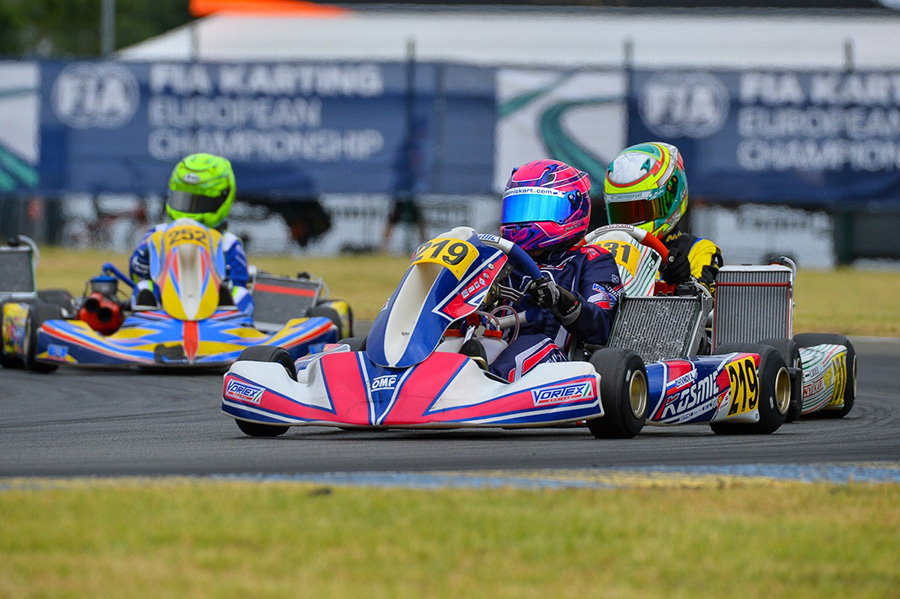 The FIA Karting European Championship ends in the best way for the Kosmic Kart, celebrating the European title conquered by Marcus Amand in the last stage run in Le Mans, France. For the French driver, after the victory in Genk and a second place in Kristianstad, the sixth place in the finali is enough to be successful with his Kosmic Mercury R chassis, gained with a very good race in which he recovers two positions. He also conquers the 3rd place in the rating, one victory and two third places in the heats.

Good satisfactions also from the official team Kosmic Kart Racing Department, whose drivers show a great deal of progress against a fierce line-up.

In OKJ, Axel Malja gets 4 ninth places in the Qualifying Heats (although, to be honest, in the last heat he finishes third with the best lap, but he is then penalized by 5 seconds) and, despite an unlucky withdrawal in a heat, he gains the access to the final. Here he shows all his potential, recovering 11 positions.

Amazing recover in final also for Andrey Zhivnov who, after the brilliant sixth and ninth place in the heats, he recovers sixth opponents in the decisive race on Sunday afternoon.
Great commitment, but so much bad luck, even for our newcomer Karol Andrzej Pasiewicz who proves to be one of the most fighting drivers on the French track; unfortunately his results are compromised by some post-race penalization, preventing him from giving further proof of his talent even in the most important race.

Alexander Gubenko, starts his weekend with low-key performances in the qualifying heats, forcing him to start from the backlines in all the heats. Despite his 42 comebacks overall, proving the great potential of the Kosmic Kart / Vortex, he cannot center the access to the final.

For Liu Ruiqi, finally, this has been his very first experience in a FIA European race. A positive début in which he can lay the groundwork for his growth.

NicolasPino tries to make his way among the expert drivers of the OK category. The performances of his Kosmic Mercury R powered by Vortex are great, but the unfavorable qualifying heats give the young Chilean a difficult starting position in the heats, from which, despite his good comebacks, he fails to center the final.

After a brief break, the Kosmic Kart Racing Department will start again to work hard to confirm the excellent results achieved so far also in the highlight of the international season: the OK and OKJ FIA Karting World Championship scheduled in Alahärmä, Finland, from 5th to 8th September.