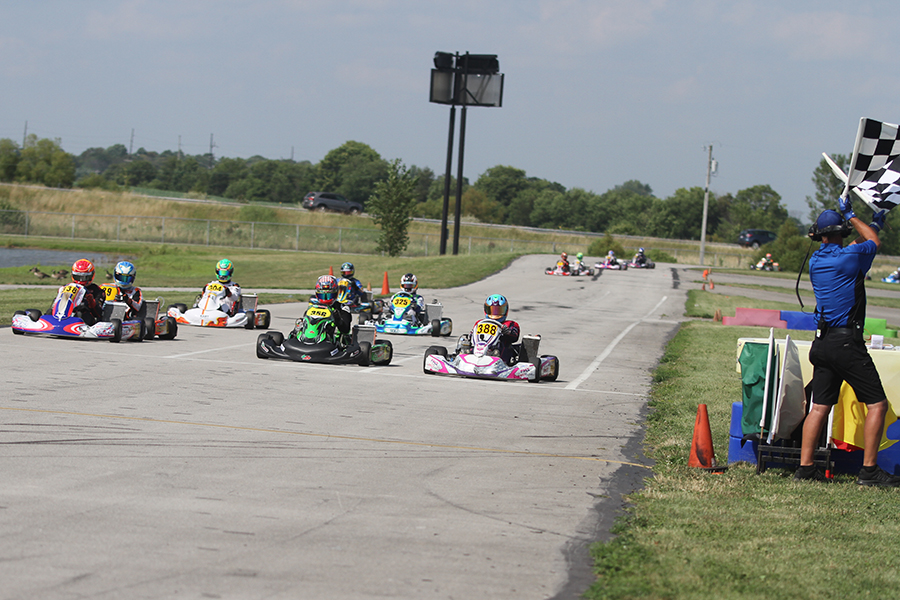 The 2019 United States Pro Kart Series presented by MG Tires hosted Round Five of the championship chase on Saturday at the New Castle Motorsports Park. The opening day of racing for the Hoosier Grand Prix was intense, with the highest entry mark for an event in the seven year history of the series. Perfect weather for racing hit the New Castle, Indiana facility as the seven IAME categories fought hard around the 1-mile circuit all day. A number of the finishes went down to the wire, further defining the title chases that will be decided on championship Sunday.

The X30 Pro division had no shortage of drama throughout the day at 31 drivers taking to the track. Jake Venberg (Franklin / Kosmic) was able to play the draft and lock up fast time in qualifying. He would drop back to fourth in the Prefinal as Alex Bertagnoli (KSNA / Kart Republic), point leader Brandon Jarsocrak (MDR / Tony Kart), and Round Two victor Zach Hollingshead (OGP / TB Kart) jumped ahead after a solid battle in the 14-lap run. All four, along with Jesus Rios Jr. (SoloKart), continued to fight for the top spot throughout the 18-lap Final. Jarsocrak and Hollingshead fought the most, swapping a number of times until Venberg, running third, put himself into the mix. He and Hollingshead went back and forth. It ended up becoming a last lap drag race to the checkered flag between the three. Venberg got the best run out of the I-70 corner, and reached the line first by 25 thousandths of a second. Hollingshead was second with Jarsocrak third. There fighting allowed a charging Austin Garrison (CRG Nordam), who came from 30th on the grid after a broken chain in the Prefinal, to climb into the top-five. He jumped up to fourth in the final circuit, ahead of Bertagnoli and Rios. 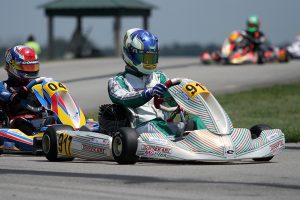 Blake Hunt padded his championship lead with his second victory on the year in KA100 Senior (PHoto: EKN)

The KA100 Senior division ended up a two-driver battle after a large lead pack throughout the day. Alexander Kardashian (Top Kart) set fast time in qualifying for his first USPKS start of the year, and finished second to Garrett Adams (Comet / FA Kart) in the Prefinal. Stephen Dial (Milrock / Kosmic) led early with both Kardashian and Adams taking a turn at the point. Championship leader Blake Hunt (KSNA / Tony Kart) worked his way up from eighth on the grid, and locked with Adams to pull away. Adams led until the white flag and through I-70. Hunt caught a good enough draft to slingshot past Adams, reaching the line first by five thousandths of a second, earning his second victory of the season and first major win outside of his home track at GoPro. Dial held on to complete the podium in third ahead of Kardashian with John McCusker (MDR / Tony Kart) beating out TJ Koyen (Innovative / Exprit). 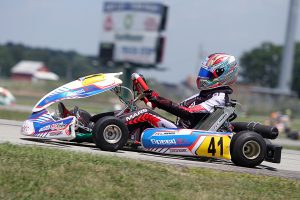 It was a poor start to the weekend for the X30 Junior division with a total of two red flags just in the Prefinal. The first included Connor Ferris (TFR / Kart Republic) with a flip on lap two, suffering a broken arm. The second ended the race early, with point leader John Burke (Supertune / Tony Kart) earning the win but a pushback bumper penalty dropped him to third and gave Hayden Jones (Nitro Kart) the pole position for the main event. Jones was joined by Luca Mars (SCR / Tony Kart) and Burke at the front of the Final as the trio pulled away early. Jones however would retire on lap six. Brent Crews (KSNA / FA Kart) was involved in the red flag in the Prefinal, and came from 30th to eighth in the 10 laps. He charged forward in the Final and joined Mars and Burke for the fight. Taking over the lead on lap nine, Crews set the pace until the white flag. Crews ran a defensive line as they both tried for a way past. Mars was successful, reaching the line first by 47 thousandths ahead of Crews for his first victory on the year. Burke settled for third, making it a solid day in his bid for the championship. A number of pushback bumper penalties – 18 in total for that race alone – shuffled up the top-10. Jace Park (SCR / Tony Kart) came out of the Final with the fourth position after starting 31st, with Paul Bocuse (SCR / Tony Kart) in fifth. 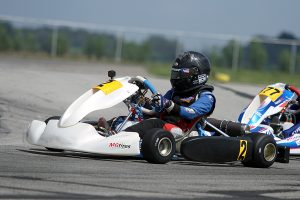 Logan Adams went from third to first in the final corner to win the KA100 Junior main event (Photo: EKN)

KA100 Junior championship leader Brent Crews (KSNA / Kart Republic) looked to be en route for a sweep on the day, setting fast time in qualifying and crossing the line as the provisional winner in the Prefinal. A pushback bumper penalty dropped him to fifth on the grid for the Final, handing the pole position to Connor Zilisch (LAK / Tony Kart). Crews was involved in an opening lap incident at the ‘cell tower’ corner, ending his race before completing a lap. Out front, Zilisch was joined by Kyffin Simpson (SCR / Tony Kart) and Logan Adams (Comet / FA Kart). Zilisch led a majority of the laps, including the white flag. Simpson was the top challenger and tried a move at the I-70 corner. The two went wide, and Adams timed it perfectly to slip past both to go from third to first, grabbing his first series victory in the category. It was a three-wide finish to the checkered flag, with Simpson was just five hundredths short at the line, edging out Zilisch for the second spot. Tyler Wettengel (KSNA / FA Kart) ran solo in fourth with Erikson Evans (DCT / Kosmic) coming from 17th to fifth. 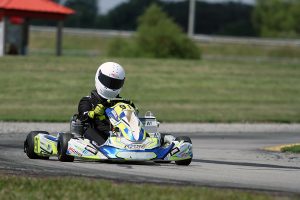 David Galownia scored his second victory of the season to grow his championship lead in X30 Masters (Photo: EKN)

It was anything but calm in the X30 Masters class on the day, with issued beginning the with first green flag. Top qualifier Scott Kopp (Innovative / Exprit) led the field to the green flag with point leader David Galownia (Timmy Tech / CompKart). Galownia pinched Kopp in the opening corner, and triggered contact between the two with Scott Roberts (SCR / Tony Kart) having no where to go. Kopp and Roberts got the worst of it, with Kopp able to continue at the back while Roberts spun around backwards, and pulling off after he was able to restart. Galownia ran continue on to win the Prefinal ahead of last year’s winner Darin Marcus (Franklin / Fullerton). The exchanged the lead in the opening corners until Galownia took control on lap three, and pulled away to a three-second advantage for his second victory of the year. Marcus earned a third runner-up result on the season, with the fight for third going down to the wire. Defending champion Laurentiu Mardan (Tecno Kart) assumed the spot until a charging Roberts caught him before the halfway point. Mardan fought tough, and Roberts lost a spot to Kopp. It was Kopp able to work past Mardan, with Roberts getting by the following lap. Roberts completed his drive to the podium with a pass on Kopp in the final circuit, as Mardan rounded out the top-five. 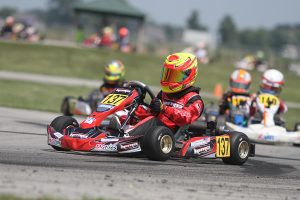 Each weekend, the Mini Swift category provides its own drama with each lap. Today was no different, especially at the end of the day. Elliot Cox (CRG Nordam) started the day out with his first pole position of the season at his home track, but was unable to convert it into a win in the Prefinal as point leader Christian Miles (KSNA / Kart Republic) took the win. Contact on lap six of the Final took Cox along with a few others out of contention, with three drivers able to break away. Miles was the meat of a sandwich, including Supertune / Tony Kart teammates of Kai Sorensen and Anderson Leonard. It was Leonard leading the majority of the race until contact between he and Miles with two laps remaining sent him off the track and out of the race. Sorensen had just passed Leonard for the lead, and seemed to have the race in hand until he came down the front straight to take the white flag when his engine fell off of power. He nearly caused a few wrecks, limping his machine around the final circuit, and ended up the last kart on the track in 24th. Miles went on to cross the line as the provisional winner, only to be handed a four-position penalty for contact with Leonard, dropping him to fifth in the order. That promoted Cameron Weinberg (Nitro Kart) to the top of the podium for his first victory of the season, and the fifth different winner on the year. Max Garcia (KSNA / Kart Republic) crossed the line in second, with a pushback bumper penalty dropping him off the podium in to fourth. That gave Franklin / Merlin teammates Cameron Brinkman and Austin Jurs their first podium results of the season. 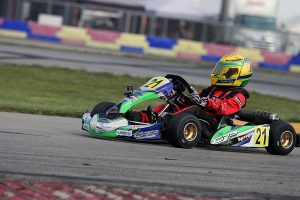 The Micro Swift victory went down to the very, very end – recording the closest finish of the day. A wild finish in the Prefinal went to three-time winner Spencer Conrad (Nitro Kart), and the craziness continued into the Final. Unfortunately, contact on lap two brought out a red flag and took out three drivers, including top qualifier James Moss (Benik). The race restarted with point leader Aryton Grim (Nitro Kart) on the bumper of Conrad. He sat there until the final lap, and was able to pull off the slingshot at the checkered flag to edge out Conrad for the victory by only one thousandths of a second. Kai Johnson (Energy) grabbed his first podium finish of the year in third with Nash Gierke (Kart Republic) and Caleb Tarter (Nitro Kart) in fourth and fifth.

The series concludes on Sunday, with the sixth and final round of the 2019 season set for the New Castle Motorsports Park. It will be the final chance for drivers to earn a victory or help the chances in the championship chase.