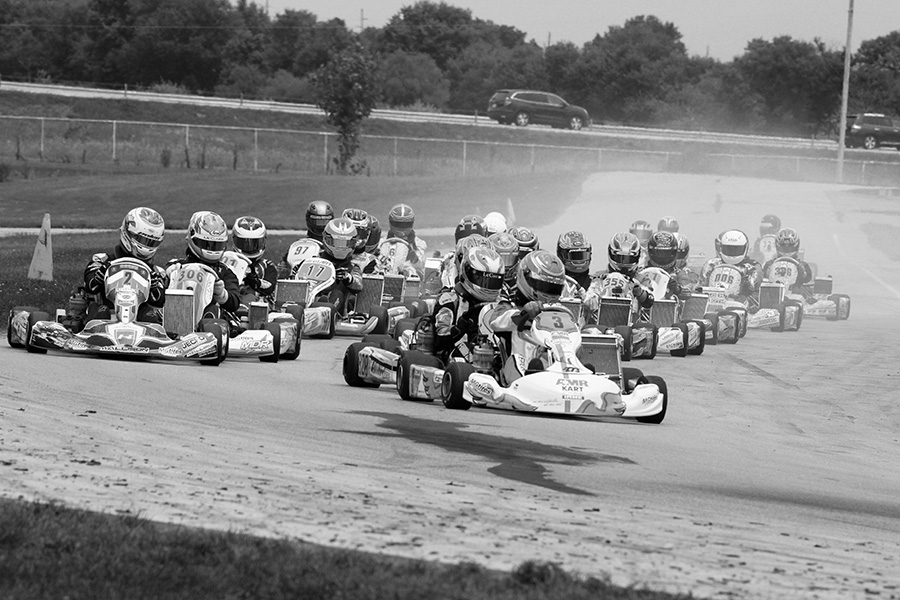 The 2019 United States Pro Kart Series presented by MG Tires concludes this weekend at the New Castle Motorsports Park. The Hoosier Grand Prix is set for the New Castle, Indiana facility with the final two rounds of the six-round championship program to be contested around the 1-mile circuit. Entry numbers reached a new series record for pre-registration up to 171, one above the GoPro weekend from last month, with the weekend gearing to be the largest USPKS event in its seven-year history.

eKartingNews.com is back for the seventh year with United States Pro Kart Series to provide industry-leading coverage from each of the three events for the 2019 season. Those karting enthusiasts not in attendance can listen from home or on the road to the EKN Live broadcast page at www.ekartingnews.com/live with Tim Koyen providing the play-by-play call. Daily reports and updates on the EKN Social Media network will fill up your timeline throughout the weekend.

The two days of racing in New Castle will decide the seven champions in the IAME categories, with the point structure including all six Prefinal and Final results, in addition to 10 bonus points for qualifying P1. Each session and each lap will be crucial for those fighting for the titles, while battling the many competitors who are here for one thing…to win. 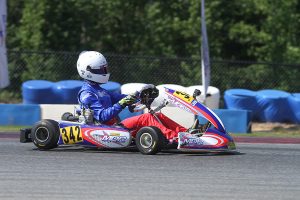 Four rounds of racing, four different winners in the X30 Pro division. The latest two winners, however, are the two fighting for the championship. Senior rookie Josh Green (MDR / Kosmic) grabbed his first major victory of the season in Round Three, and holds the lead in the championship chase with three straight podium finishes. Trailing is Round Four winner and defending champion Brandon Jarsocrak (MDR / Tony Kart). The two-time champ trails Green by 72 points heading into the weekend. A group of drivers are more than 200 points out – including Round Two winner Zach Hollingshead (OGP / TB Kart), Jake Venberg (Franklin / Kosmic), Pauly Massimino (MDR / Kosmic) and Round One victor Austin Garrison (CRG Nordam). They will be clawing for any points they can on the top two, while trying to distance themselves from each other. The near 30-driver field includes many of the competitors who competed in Ocala and GoPro, along with new comers on the year. Florida native Jesus Rios Jr. (SoloKart), Californian Jace Denmark-Gessel (RPM / Tony Kart), and Texan Travis Wiley (IRM / Tony Kart) are among those joining the fight on the weekend. 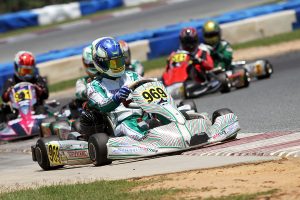 Blake Hunt in the target for title contenders in KA100 Senior (Photo: EKN)

It is a similar situation in the competitive KA100 Senior category, with four different winners in the four different rounds. Round Three winner Blake Hunt (Tony Kart) has four top-four finishes, including three straight podium results to enter the weekend as the leader in the championship chase. The advantage is 99 points over Round One victor Josh Hotz (Franklin / Merlin), as the Wisconsin driver only has two podium results over the first four rounds. A large group sits third and back, led by Emory Lyda (Nitro Kart), back by 197 points. Arie Venberg (Franklin / Kosmic) has three top-five finishes to be fourth in the chase, with Matthew Mockabee (Comet / Kart Republic) coming off a runner-up in Round Four. He placed just behind Brooke Nachtmann (Tony Kart), who scored her first major victory in the last round, set to make her second event of the season traveling to New Castle. Round Two victor Colton Ramsey (Innovative / Exprit) returns to action after missing the GoPro weekend, ready to battle for victory. Add in Stephen Dial (Kosmic) and Alexander Kardashian (Top Kart), both making their first starts at USPKS in 2019. Moving back to the class is 2018 vice-champion TJ Koyen (Innovative / Exprit), searching to battle for podium finishes once again. 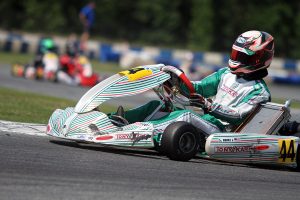 Texan John Burke is gunning for the X30 Junior title in his first season with the series (Photo: EKN)

The largest category of the weekend after pre-registration is the X30 Junior class at 34 drivers – the season high for the division. At the top of the championship chase is Texan John Burke (Supertune / Tony Kart). Burke has four top-five finishes, including three podiums. The Round Two victor holds an 85-point advantage over Kyffin Simpson (SCR / Tony Kart) with Brent Crews (KSNA / FA Kart) 99 points off Burke. Three drivers have won over the first four rounds. Jeremy Fletcher (ZR / Tony Kart) won Round Three and sits fourth with Connor Zilisch (LAK / Tony Kart) holding fifth after winning twice on the year. Both will need help as they are over 180 points back of Burke. With the large field, you can add in a number of the drivers entered into the mix to challenge for the podium positions, which will play a factor in the championship chase. 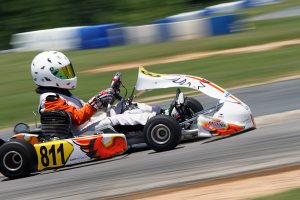 Brent Crews is in control of the KA100 Junior standings heading into the finale (Photo: EKN) 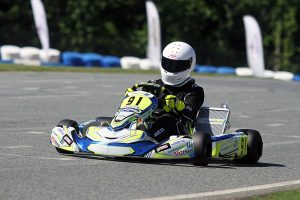 The tightest championship fight of the series is in the X30 Masters class as six drivers sit within 71 points of each other heading into the finale weekend. Round One victor David Galownia (Timmy Tech / CompKart) holds a slim five-point advantage over Round Four winner Scott Roberts (SCR / Tony Kart). Scott Kopp (Innovative / Exprit) won Round Three, and is 11 points out of first with defending champion Laurentiu Mardan (Tecno Kart USA) only 12 markers back of Galowina. Mardan has yet to win a race in 2019, putting himself into the title chase with two podium results at GoPro. Round Two winner Danny Robertson (OGP / Tony Kart) is fifth with Darin Marcus (Fullerton) in sixth. Looking at the six in contention, Marcus won in his debut in the category last year at New Castle, with Roberts earning the other main event. Kopp landed on the podium twice in 2018 at NCMP while point leader Galownia calls New Castle his home track. It is likely these six will be around one another all weekend long. 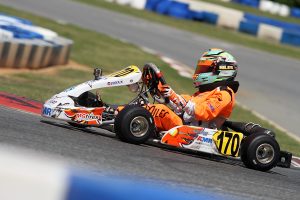 Two drivers stand out in the Mini Swift category heading into the final rounds for the championship. Christian Miles (KSNA / Kart Republic) has four top-five finishes in the four rounds, winning Round Three to enter the weekend as the championship leader. Defending champion Kai Sorensen (Supertune / Tony Kart) has two wins on the year but a DNF in Round Three has him trailing Miles by 23 points. Michael Costello (Benik) and Anderson Leonard (Supertune / Tony Kart) each have three top-five results on the year, sitting third and fourth in the championship. Max Garcia (KSNA / Kart Republic) and Round Two winner Jorge Ortiz (Supertune / Tony Kart) complete the top-six in the title chase, sitting within 172 points of Miles. With the field expected to eclipse the 30-driver mark, there will be a number of drivers gunning for the victory and podium positions on the weekend. 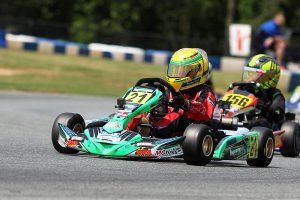 The title chase in Micro Swift could go down to the wire. Aryton Grim (Nitro Kart) has four straight podium finishes on the year, including a victory in Round Three, to hold the championship lead going into the series finale weekend. Spencer Conrad (Nitro Kart) won the other three rounds, suffering a DNF in the race Grim won. Conrad trails Grim by 104 points, needing to beat Grim in every on-track session on the weekend. Grim’s magic number to secure the championship is 447 points with 15 entries over the two rounds – that equates to finishing third every session – if Conrad were to sweep the weekend. Jack Iliffe (Tony Kart), Carson Weinberg (Nitro Kart) and James Moss (Benik) hold the remainder of the top-five in points heading into the weekend.