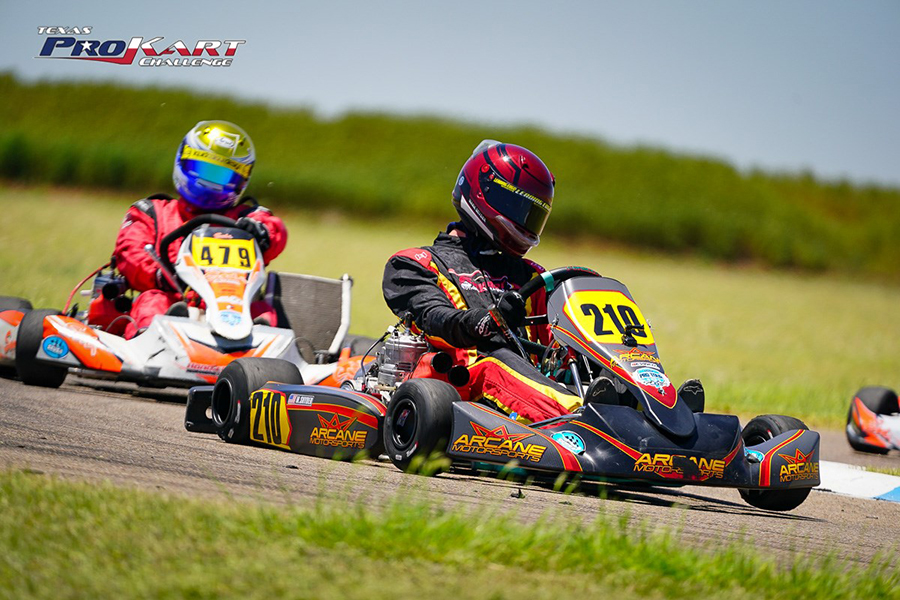 The racing at the Amarillo Kart Circuit during the Texas ProKart Challenge was just as hot as the weather
(Photo: Ken Johnson - Studio 52)

High heat and high winds characterized this year’s Texas ProKart Challenge stop at the challenging Amarillo Kart Circuit in West Texas. The private track hosted the third and fourth rounds of the series during the doubleheader, and it was the X30 Senior and Junior, and Briggs 206 categories that attracted the largest turnouts, although incredibly exciting racing was enjoyed throughout the class line-up. Kaden Grey (Tonykart) swept Saturday’s X30 Senior action, while Alejandro Jaramillo (Exprit) came back on Sunday to take the win. The racing was close up front in X30 Junior as well, with three primary contenders. Alex Stanfield (Exprit) jetted out to win on Saturday, but it was Chase Gardner’s last lap move from fifth to third that was the highlight, as he stole the final podium spot behind Aden Rudolph (BirelART). Gardner and Rudolph pushed away together in the Sunday final and Gardner held off his competition’s last lap attack to take the win. 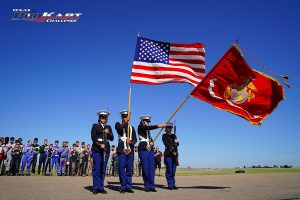 A total of seven race groups featuring nine classes took to the track throughout the weekend, with all the drivers battling the high heat. The temperature hit triple digits on Saturday, but thankfully, a significant breeze kept things bearable. The temps dropped slight for Sunday, into the mid-90s, but the wind also faded in the afternoon. The wind played a factor in set-up and strategy, elevating the power of the draft which affected gearing choice, and the lack of breeze on Sunday afternoon likely caught out a few drivers and mechanics.

The headline Crosslink Competition X30 Senior was led by Kaden Gray (Tonykart) out of the gate, as he took the Saturday victory. Behind Gray, a scrap for the second position on the podium became heated and the final results saw Alejandro Jaramillo (Exprit) end up with the runner-up position ahead of Jake French (Croc Promotion). 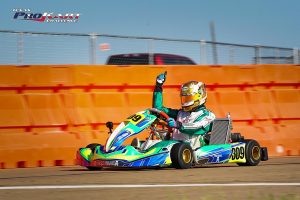 On Sunday, Jaramillo and Gray swapped the lead as they pulled away from John Berry (Tony Kart), and despite mounting an exciting attack over the final circuits, Gray was not quite able to find his way past Jaramillo to steal away the victory. Gray’s consistency on the season – three wins and a second – have given him a 115-point lead heading to the season finale doubleheader in Houston.

Three drivers dominated the Stilo USA X30 Junior competition, sweeping the podiums on both days. Alex Stanfield (Exprit) drew first blood, qualifying on pole and winning the Prefinal over Aden Rudolph (BirelART) on Saturday. In the final, the duo locked up and pulled away to finish 1-2, but the focus was quickly on the charge being mounted by Chase Gardner (Exprit), who started second but fell back at the start. Once focused back forward, Gardner then capped his drive to pass both Ryan Shehan (Exprit) and Ryan Ascencio IV (Exprit) on the final lap of the 18-lap main to steal away third. 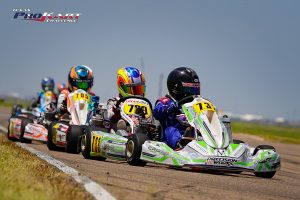 On Sunday, Gardner quickly went to the lead from third in the main and he and Rudolph paired up to pull away from Stanfield. Rudolph tried to line up Gardner on the final lap, but Gardner ran the defensive line into the left-hand turn 10 and while Rudolph tried the outside to open up for an over-under, Gardner managed the apex and the exit to win the run to the checkered and the victory. Rudolph was forced to settle for his second runner-up finish of the weekend while Stanfield was third. In the title fight, Adrian Cruz (Exprit) still leads the points thanks to his sweep of the win in Denton, and his Amarillo results of sixth and fourth have put him in a seven-point lead over Stanfield. Gardner is just 47 points back, and with the drop, Rudolph still has an outside shot at the crown. 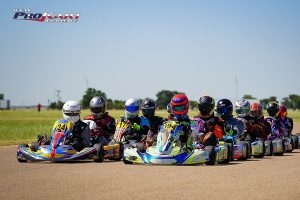 A field of 13 drivers enjoyed the track in the Briggs 206 Senior class, which is sponsored by Rimrock Raceway. Royce Johnson (FA) scored a double-win weekend, although he needed to race hard within a three-driver pack on both days. Johnson topped R.J. Guajardo (Compkart) and Ethan Arndt (Compkart) on Saturday, and then Jeff Dolian (Margay) asserted his presence on Sunday after a shifting axle dropped him from the lead pack in Saturday’s main. Dolian challenged Johnson right to the line, coming up just 0.095 seconds short at the checkered. Arndt was again the third-place finisher. EKN’s Rob Howden raced with the Speedsportz Racing Park team and finished seventh on Saturday in his Birel, taking eighth on Sunday after starting at the tail of the grid. Paul Gonzalez (CRG) was the long 206 Masters driver on the weekend. In the championship battle, Johnson now holds a sizeable 180-point lead over Guajardo and Tyson Knight (Kosmic), who scored a pair fourth-place finishes in Amarillo. With one drop being allowed for the championship battle, Dolian is also in the hunt, having missed Round 1 in Denton. He raced Sunday only and took the win, and he’ll drop the no-show. 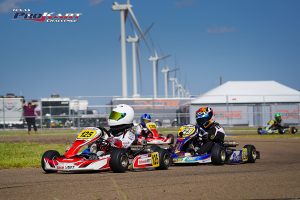 In the Alan Rudolph Racing Academy Mini Swift class, Davis Cunningham (BirelART) scored the Saturday win after a close race with Liam Flanagan (Praga). Flanagan pushed Cunningham away from the pack to fight it out amongst themselves, but contact with the leader when making a turn 10 pass for the win resulted in a one-position penalty. Cunningham was able to come back on track after the contact to finish second, and was then re-instated as the winner after the ruling, which was the right call. Archer Eversman (Exprit) took third, ahead of Joseph Moss (BirelART) and Dylan Archer (Exprit). On Sunday, Flanagan led the way but it was the charge forward by Landon Skinner (Energy) that kept everyone on their feet, as he chased down the lead duo of Flanagan and Parker DeLong (Benik) to make the final laps thrilling. Skinner laid down the fastest laps of the race, eventually getting past DeLong to take second, coming up just short in trying to get past Flanagan for the victory. DeLong finished third, ahead of Cunningham and Eversman. With his finishes, and his Saturday win, Cunningham holds a 214-point lead over Moss but the actual gap is much closer with the drop is factored in. 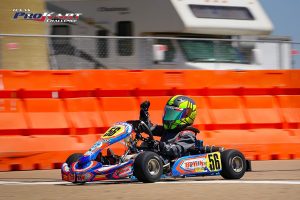 James Moss was the dominant driver in the Micro Swift category, winning on both Saturday and Sunday
(Photo: Ken Johnson – Studio 52)

Speedsportz Racing Park driver James Moss (Benik) controlled the Micro Swift action on both days, topping Crosslink Competition’s Charlie Bradbury (Exprit) and Ethan Thomason (Exprit) on Saturday. Moss was again the one to beat on Sunday, while Thomason and Bradbury swapped positions on the podium. Clayton Ingram (BirelART) and Austin Roy (BirelART) completed the top-five in both races. The title fight heading to the finale in September is tight, with Thomason holding just a five-point advantage over Moss.

Mark Snyder (CRG) was the top dog on the Pro Shifter class on Saturday, but a flat right front Evinco put him on the sidelines in Sunday’s main, which opened the door for Miguel Garcia (Sodikart) to take the top step on the podium. In the Honda Shifter class, three drivers took to the track and COTA Karting’s Gregory Lewis was the man to beat, winning both days over Skyler Sutton (Intrepid) and Eric Vanderdussen (CRG). 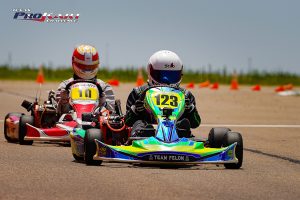 Cameron Steller emerged from a weekend-long battle with Peyton Phillips to score a pair of wins in Briggs 206 Junior
)Photo: Ken Johnson – Studio 52)

Cameron Steller swept the weekend’s main events in the Briggs 206 Junior class, battling with Peyton Phillips on both Saturday and Sunday. Phillips was P2 in both races, while Alex Rabas completed the podium. In a combined race group with the Juniors, Josiah Tracy (Kosmic) won both KA100 Senior races over Santiago Massey.

The Texas ProKart Challenge family will reconvene on the September 13-15 weekend at Speedsportz Racing Park in Houston for the final two rounds of the championship. EKN will be trackside to provide live audio and social media coverage.